Don't be surprised if this month is kinda Superhero heavy. 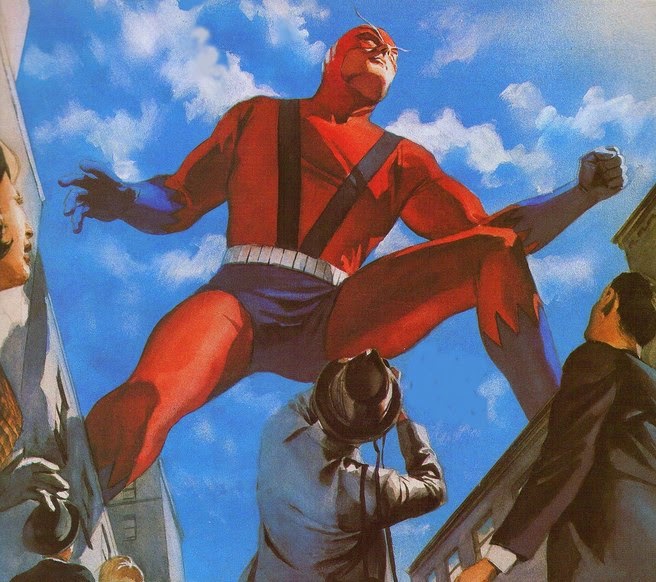 MARVELS Panel By Alex Ross
In addition to the weekly online Superhero game I'm in as a player, and the bi-weekly (or so) Supers game where I switch between player (mostly), and guest GM (occasionally), I am gearing up for a new Superhero RPG campaign with my regular group to begin (hopefully) in December.
Dang, but that was one of my most annotated paragraphs in a while. Sheesh.
Back to the subject of this post, it looks like my group may finally be getting the Four-Color Superhero genre the way I see it, and that is a big plus in my attempt to run something with a little staying power. Our last few attempts at Superhero campaigns have often experienced great starts, but quickly buckle under a combination of the players being unfamiliar with the tropes of the era of comics I like, and my frustration with them not comprehending what to me is so second nature I don't even think about it.
Truly this is unfair of me, I know. I can't expect them to understand something largely foreign to them, which I've spent almost 40 years being engrossed in (See my recent post, A Secret War). At the same time, as I've said before, I have tried to provide them with frames of reference, and a few of them are familiar with the era, and style of comic books I'm talking about.
On the suggestion of my good pal Dave*, I have attempted to approach this campaign, and character creation specifically, in a slightly different manner than that which I've used in the past. ﻿In my mind, I have been a tad more heavy-handed in telling the players what I'm looking for with this game. Dave was insistent that I had to be if I wanted to run a particular type of Superhero game. I do believe he's right.
It may not be my preferred way of doing things, but the results have been pretty good so far.
As expected, I still have two players who's characters are a tad off, although mostly in their powers. Their backstories and such are excellent. They are coming around, albeit a little slowly. That's OK by me. Take all the time you need to get the parts to fit together I say.
Expect updates on the PCs and the setting (still a mystery to most of the players! Yay!), ideas and attitudes toward running Supers, and anything else that pops up while I develop this campaign.
Questions and comments are always welcome!
Oh, and if you know of any good Superhero tabletop RPG blogs or podcasts, send them my way. Thanks!
AD
Barking Alien
*Dave is/was, surprisingly, having the most trouble with the overall feel of the campaign, even though he is my biggest advocate for the running of Superhero games.
Dave is not a fan of the Silver/Bronze Age periods of comics. I find this somewhat perplexing, even knowing the reasons for his opinion. My point to him was, "utilize the tropes and style, but add what you felt the comics of that era were missing".
It's comic books, not brain surgery, yet sometimes I think it would be easier to assemble a Brain Surgery RPG than one of the former type.
Posted by Adam Dickstein at 11:28 PM