I had always intended on posting a Player Profile of my long time friend, and gaming buddy Allen Halden, but never in a million years would I have imagined I'd be doing it posthumously. 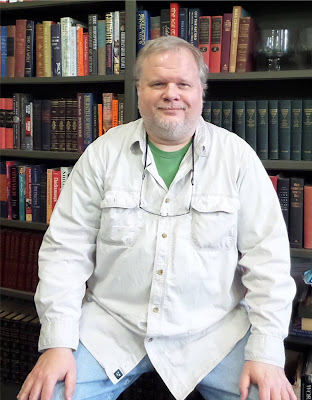 The most recent photo I could find.

This man's pinky knew more than your whole head.

I first met Allen about 25 years ago, when two of my New York friends introduced me to a group of like minded individuals who all met at the home of twin brothers who lived in New Jersey.

The brothers Moriarty had a pretty big house, and it had apparently become a mecca for gamers, comic books fans, Anime/Manga otaku, and pop culture geeks of every shape, size, and denomination. All races, cultures, ages, religions, genders, income levels, and every other manner of people were (and are to my knowledge) welcome.

The house, to this day, is known by the nickname, 'Strike Force Moriarty' (bonus points if you get that reference).

Allen and I didn't immediately become friends. Barely acquaintances. There were just too many people coming in and out of the house, talking about too many things. It would be a handful of visits before he, and I spoke at length.

There was one particular RPG campaign being run at the house that some friends I already had, or had made, were involved with, and that's where I first connected with Allen. The game was based on Sentai, the Japanese live-action superhero phenomena that we Americans appropriated and turned into the 'Power Rangers' franchise. The number of players in this campaign was huge, a dozen or so, though neither I, nor Allen were involved.

It was a running gag that Allen wanted in, and he said that alongside Red Dragon, Blue Dolphin, Golden Hawk, etc. he could be...(looking down at his own violently chartreuse t-shirt)...The Lime Green Wombat!

Ah, yes...one of Allen's many nicknames. The Lime Green Wombat. The Finicky Barbarian. Player of Freaks.

Anyway, I knew at that moment this fellow was my kind of guy. 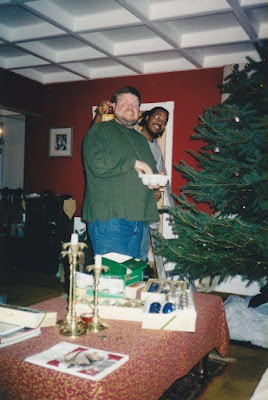 Photo of Christmas Past


Over the next two decades and change, he and I would become close friends, and game together a lot. For the majority of our RPG interactions I was the GM, but on rare occasions I would get to play in one of his games. He was an excellent GM, but I will speak more about his GMing legacy a bit later.

Allen was an amazing player. Amazing.

He was equally adept at logic puzzles, combat tactics, and in-depth characterization.

I was the best GM I could be with Allen as a player. I could create complex mysteries, tough opponents, and challenging environments, because Allen could handle them all. Best of all, he knew how to work with the strengths of the other players, and how to compensate for their weaknesses, as well as his own.

Over the years this became more than a gaming group, and Allen more than my friend. We were brothers, and this was our family. 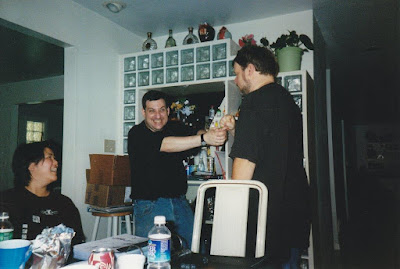 Here he is demonstrating how foolish it is for normal crooks
(represented by yours truly) to go up against Superheroes,
or as he called them, 'Gods in Long Underwear'.


He had an incredibly analytical mind, with the kind of deductive reasoning capabilities that would make Batman and Sherlock Holmes jealous.

He was an extremely knowledgeable fellow on a great many subjects, including but not limited to military history (including extensive Naval history), ancient history, the Victorian era, classic, Golden Age era Science Fiction, and Fantasy novels, and so much more.

His knowledge of gaming miniatures was quite uncanny. He could identify who made a particular figure, when, and in many cases who the sculptor was. If you said, "I need a mini for this game I'm in, but...I'm playing a dinosaur riding cowboy with a laser gun. How am I ever going to find something to represent that?" Allen would most assuredly reply, "I believe Ral Partha made that in 1980-whathaveyou...", and likely go on to find one in his massive collection.

He himself was a fantastic minis painter, and custom built all kinds of vehicles, terrain, and various sorts of accessories. You can see some of his work in this area on his websites, RavenFeast's Mead Hall, and Rivets & Steam. Although perhaps not as often in recent years, he was a regular attendee of numerous gaming conventions, especially Winter War, and Historicon.

He was an incredibly funny individual. Smart, sarcastic, dry of wit, and clever with puns, Allen was great at delivering comedic lines, or serving as the straight man (usually for me). He was an integral part of my Galaxy Quest, and Ghostbusters games. My long history of running humorous RPGs probably wouldn't have been possible without him. 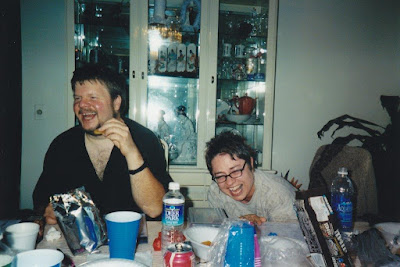 Allen and Rebecca, the latter in her usual state
of being virtually paralyzed with laughter.

He and I agreed on a lot of things, and shared very similar views of how games can work. I know this sounds selfish, but with Allen gone I feel like there is one less person in the world who really understands what I am trying to do at the gaming table.

We didn't agree on everything, though Allen was rarely if ever the argumentative sort. He was the last of truly great 'discussers'. He would listen to your ideas and opinions, calmly site ones he agreed, or disagreed with, and give you his own in a measured, reasonable fashion.

He liked war games, miniatures games, and fantasy. We both loved classic Star Trek, but he was not a fan of Star Wars, or Superheroes. We still got along (heheh), and I played the best minis game ever with him as GM/Referee. I convinced him to play both a Supers one-shot, and a short campaign of Star Wars. We always trusted in the ideas of the other.

One subject we both enjoyed immensely was giant robots. It was he who introduced me to some of the Mecha Anime I came to love, including Aura Battler Dunbine, Panzer World Galient, and Combat Mecha Xabungle (the latter two being Allen's absolute favorites). Mekton was a one of his most beloved RPGs.

The game we played together the most was probably Star Trek (Last Unicorn Games' Icon System). I can easily recall his characters for three separate campaigns. His favored approach was to take an obscure alien in the background of an episode, or film and flesh out their species enough that he could play them with considerable depth. Over time, he would expand on his initial ideas, adding to the milieu as a whole and not just his own PC. Other games I got to run for him include Faery's Tale Deluxe, my homebrew Galaxy Quest game, Ghostbusters / InSpectres, Mekton, Wares Blade, and many more.

His best, and most memorable characters [in my opinion] were:

First Prefect, Alien Super Soldier from Beyond our Galaxy (Deeds Not Words)

These are but a handful of examples of his varied, and diverse cast of characters, across a plethora of genres, and systems. Others I recall include his his Edoan First Officer in a Classic Star Trek campaign (FASA), a Watchmaker/Tinker Brownie in Faery's Tale Deluxe, and of course the superheroic First Prefect, from our single Superhero outing.

Any tribute to Allen would be incomplete without a reference to his Panzer Dreams campaign. 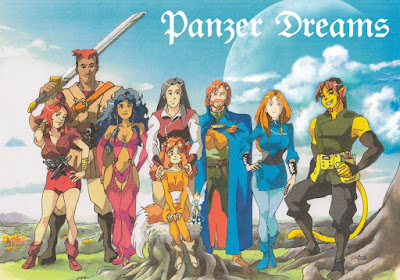 Panzer Dreams was Allen's magnum opus, his masterpiece. It was a dark, romantic, action packed fantasy tale set in a world of his own creation that resembled 15th century Europe with giant robots.

Although I only made a guest appearance in a single session, I am well aware of the impact this campaign had on the players who participated in it. They still talk about it to this day, fondly and often, and as I've noted in the past there is no greater evidence of a successful campaign then that.

People were moved. They were touched. Like the man himself, it left a lasting impression that made you think.

I usually include something written by the person themselves when I do these Player Profiles, and this case is no different.

Here is the last thing he wrote, read aloud by his sister at his funeral...


"The painting bench has been cleared for the last time; toy soldiers, ships and mecha packed away, never looked upon again by me. Tiny, little dreams that, perhaps, someone else will one day finish. May whoever they are find a bit of the happiness that I did in that old chair, under those lamps, brush in hand. Mayhap, even be lucky as I have been: to have made it around the table, rolled dice amongst friends, old and new, and laughed."


This is not the first time the name Allen Halden has graced this blog, and it will not be the last.

This post is a tribute, but no more than a raindrop in a bucket, or a grain of sand on a beach in its capacity to convey what my friend meant to me.

It is my hope that in reading this you will feel you knew him a little as well. Please don't feel sorry for my loss, or sad at his passing. At least not so much that you miss the greater message.

Be kind. Be inclusive. Remember. Learn. Teach. Use your head. Invest emotion. Try new things. Love old things beyond their apparent usefulness. Create. Make changes. Enjoy what others have made. Add to it.

Be a little more like Allen than you were yesterday.

That's what I hope to do. 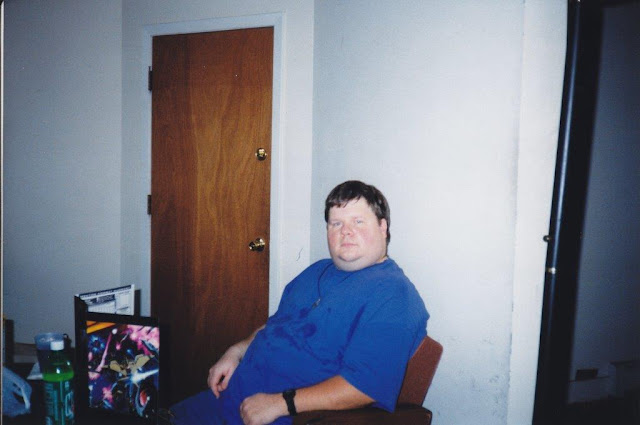 
Today, April 7th, 2018 would have been Allen Halden's Birthday.