These will probably be my last posts on the subject of Splitting The Party for a while.

I say 'these' and 'posts' because this is a two-parter.

I could go on and on with this subject, but I have a lot of other subjects and ideas I want to discuss, so I'll leave it at this for the time being.

I'm planning a Star Trek one-shot for one of the groups I game with, and in doing so I have been looking back over some of the material from older campaigns I've run. When I came across my OUTBOUND - Phase II entries, I was struck by twin bolts of inspiration.

I thought, "Wow, this was a great game. I should recap this on my blog", and "Wow, this game featured the perfect example of splitting the party done right!"

So, killing two Birds of Prey with a single Photon Torpedo (Yeah, I know. NERD), here is a recap of the Pilot Episode (First Session) of Star Trek: OUTBOUND - Phase II (the campaign title), featuring the crew of the Loknar Class* USS Thunder Bay. 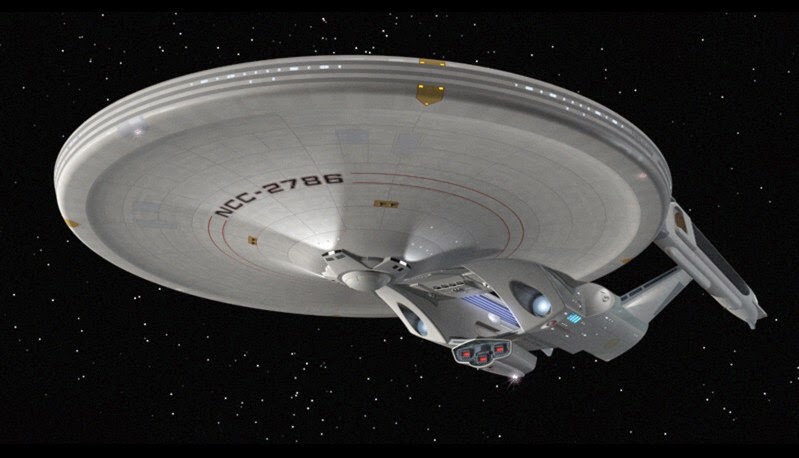 The Loknar Class first appeared in the FASA Star Trek RPG
This is a redesigned and upgraded version.
Ship design by Brian Gillies.

I love this ship. Love it.

So, the story begins in the Original Series Movie Era, sometime after Star Trek: The Motion Picture, but before Star Trek II: The Wrath of Khan. Our vessel, a combat frigate, has been repurposed as an exploration ship as part of Starfleet's Project: Outbound - Phase II (the original Project: Outbound was about 10-15 years prior). Outbound focuses on exploration in the Beta Quadrant and often comes close to the Romulan Neutral Zone.

Our crew (the PCs) consists of: 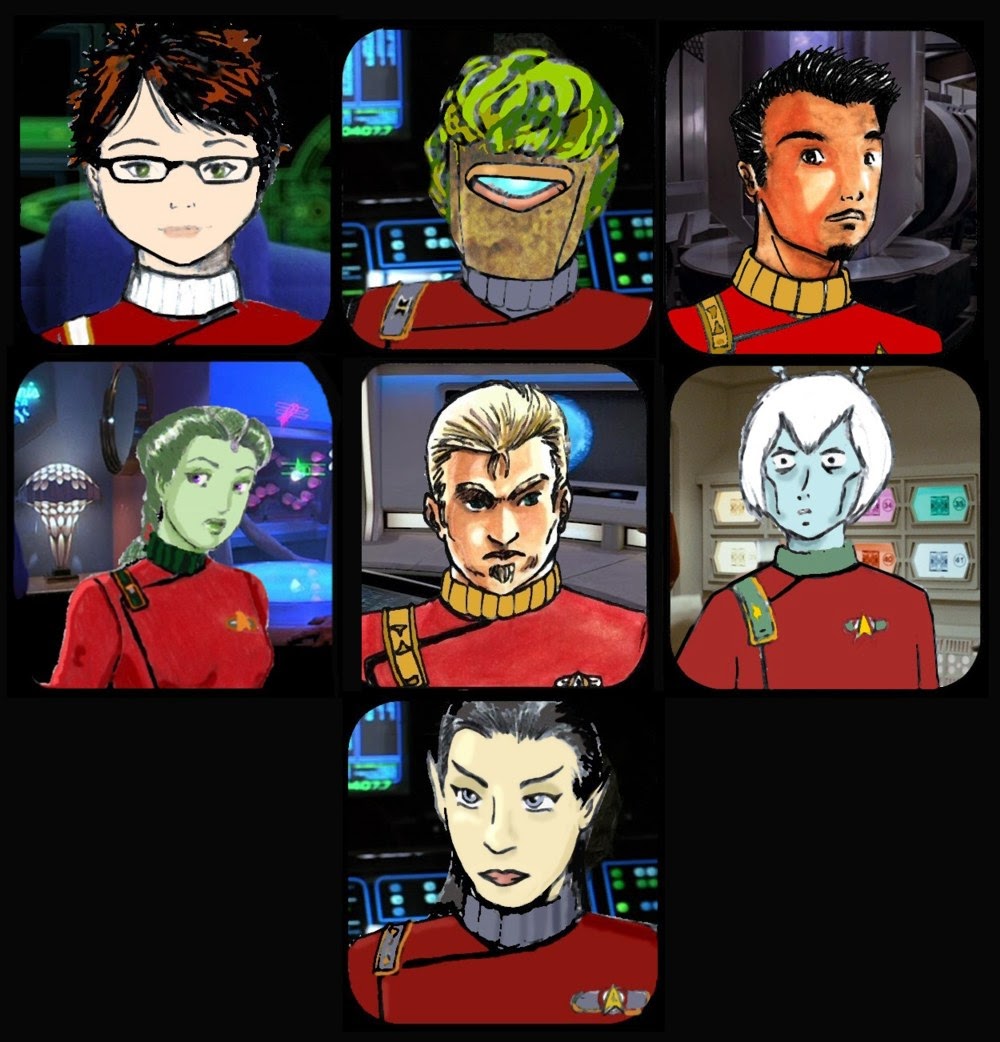 Illustrations by the players of each character
with the exception of the second and last.
The Xelatian and Vulcan were drawn by me.

(Left to right from the top)

Lt. JG Shilana Kincaid (Lynn)
Half-Human/Half-Orion, Female - Chief of Security
(Promoted to Lieutenant at the end of the session)


A Note to Trekkies: Some the ranks on the characters' uniforms in the picture might be off compared to the list above. The illustrations were not all done at the same time.

Notice that the game begins with the 'party' basically split. Munroe, Miragh, Kincaid, Santiago, and Serin are on the Bridge. Rozza is in the Engine Room/Main Engineering. Dr. Shran is in Sickbay.

In addition to Splitting the Party, I would like readers to note some of the other elements involved in this recap that I've discussed in the past. Among them, how to dole out clues for a mystery, letting each player/PC have their special moment, how much happens in one of our sessions - which was 6-8 hours in length - and the open ended nature of how to solve the situation.

I began the game by whistling the first notes of the Star Trek TOS opening. When everyone quieted down, and I had their attention, I nodded to one of the players (Ken I believe), who then turned on a CD with Star Trek theme music from one of the films (possibly II or IV - our favorites). After a moment, I signaled to Ken to lower the volume. I then signaled another player at a computer, who activated the Original Series sound effect for Red Alert.

I made a series of muffled explosion sounds (with my mouth that is), and began to call out phrases in a variety of voices, accents:

I point at the Helmsman and give him a literal thumbs up.

(Same voice) "Prepare to fire on my mark."

One of the players whispers to another, "Who is that speaking?", though I overhear it. I smile.

"Captain, we have a Plasma Torpedo inbound!"

Santiago's player says he practically barrel rolls the Thunder Bay, his dice roll just makes it. Serin, on sensors, tries to project the enemy ship's likely course. Not a great roll. She thinks they'll cloak, and come around for another pass at the areas they've already damaged. The Science Officer, Miragh, tries to use Serin's scans to track the ion output of the enemy vessel's engines. Hopefully, even if they cloak, the Thunder Bay will find some way to track them. His roll is good, he doesn't know exactly where they are, and can't get a target lock, but has a general idea of their position, which he feeds to Santiago.

First Officer Munroe grimaces and says under her breath, "Romulans" (as does the player of course).

"Captain, we're receiving a hail from the second, smaller vessel. We can't seem to get a clear signal though. The Romulans are likely jamming them. Or us."

Kincaid: "Or the whole damn area."

The players now guess the spooky, breathy voice is the Captain of the ship, and that Munroe is not yet Captain, but rather first officer. This was not something the players knew about before hand. This is essentially a prologue. I get a lot of praise from the group on this. : )

Nelson, the player of Santiago, who has played Star Trek with me a number of times before, guesses that the Captain is an Andorian. He guesses correctly.

I inform the Andorian Doctor, Shran, that one of the casualties is the ship's Chief Medical Officer. As per a discussion prior to the game, that NPC was Dr. Shran's fiancé. Shran is horrified, and Andorian level angry, which is not a pretty sight. Seething more than roaring. A low, simmering boil as he barks orders at the rest of the medical staff in coldly precise words.

The Romulan ship does indeed cloak, which I describe as flickering out before disappearing. Many of the Trek fans in the group say that doesn't sound right. Serin, the sensor officer, works with the NPC Navigator to quickly review the sensor logs of the attack.

There are several oddities in the way this Romulan ship works. First, it flickers in and out in a pattern that reminds one of an old time movie, instead of the standard wavy fade. Another is that it can decloak, fire, and recloak really quickly. She tells the rest of the crew. This prompts the Engineer, Rozza, to analyze the damaged area of the hull. He discovers the plasma burns differ from the standard Romulan Plasma Torpedo considerably. There is a physical, conventional missile impact here that then exploded into a ball of plasma.

Science Officer Miragh taps his tentacles against his console and faceplate in thought. Many are creeped out.

Meanwhile, (Me as) the Captain calls on the Helmsman to try and fire before the enemy cloaks. Santiago shoots...And Scores! The enemy cloaks, but the Thunder Bay's Phasers lance out and get a solid hit against the enemies forward sensor array and one of its Disruptors.

"Captain, our priority should be seeing to that other vessel. It could be damaged. Do we know if the Romulans hit it? What condition is it in?"

Allen, Miragh's player, says he has formulated a theory as to what transpired, and asks if he can relay it to the group. I tell him by all means.

His best assumption is that our ships sensors detected the Romulan ship and smaller unknown vessel engaged in a fight and flew over to check it out. Perhaps the smaller ship sent out a distress call. When we arrived the larger Romulan craft was attacking the smaller vessel. We likely hailed the Romulans, and they attacked us as well. Either that, or they responded and then we got into an argument that resulted in a fight. The rest of the group nods. Allen is great at this sort of thing.

I clap. Nicely done. I inform him that he was right the first time. They never returned your hail. They just started to fire on you suddenly, and without provocation or warning. I also confirm that the origin of the smaller ship is unknown. They are unfamiliar with the species and/or government that fields such a vessel.

Allen asks to roll dice to determine the condition of the unknown ship. Rolls Dice - does very well. I give him a thumbs up - as the player speaks, I nod or make hand gestures to guide his ad libbing a bit. I give him a general sense of the situation without having to say it and than have him repeat it - a typical problem of Science Officer PCs in Trek. Luckily, Allen and I are usually on the same wavelength)

"The vessel was indeed hit. Badly I suspect. We have no record of this ship design, so I am not certain how badly the craft is damaged. I think it's safe to assume they need assistance. Unfortunately, communications seem to be jammed and the transporter is down."

"We can take a shuttle. (Kincaid's player looks at Munroe's player with an earnest expression - the old NJ crew were method actors) Sir, you have first contact experience correct? We'll take a shuttle over there and help them, as well as make first contact. I'll go with you to ensure you're safety."

(Grimaces, and looks around at everyone in the room) "OK, it's a plan. Miragh, you're with us. Captain, do I have your OK on this?"

"Permission granted. Save lives. Make friends. While you're gone, we will be sure to give the Romulans hell."

Brief interlude where the three PCs, Munroe, Kincaid, and Miragh, board a Shuttlecraft and launch for the unknown, alien vessel.

At the same time, some of the other players move to sit closer together. They discuss their potential next moves, including discussing ship tactics.

I switch from the Shuttle Party to the Doctor. The PCs in the shuttle discuss first contact strategy.

In sickbay, the Doctor is sitting near a bed, crying over the sheet covered body of his beloved. Attendants come to remove the body, and he stares daggers at them. When they leave, he initiates a computer program, uploading her journals into the medical banks, adding footage from the couples personal files, and rerouting the sickbay computers interactive features to a subroutine he designed.

This is news to me. I ask what he is up to exactly. He shows me his character sheet, which clearly states he is a computer expert, and understands artificial intelligence. Oh dear...

Now, back on the bridge, time has passed with the shuttles departure, etc., and I wait a beat or so to increase the tension. Suddenly...

*The link provided for the Phobos Class upgrade to the Loknar is useful for determining the ships capabilities (for those interested), and for the deck by deck breakdown of where everything is located.

Posted by Adam Dickstein at 8:24 PM