A little thing came out in the Superhero genre you might have heard about. I think it's called...


I will start out by saying I absolutely loved Avengers: Endgame, which is doubly enjoyable for me since I really didn't like its predecessor, Infinity War.


Moreover I will definitely be spoiling Avengers: Infinity War, so if you haven't seen that one yet...what is wrong with you? Why are you even here?

Anyway, the issues I have with Infinity War are many but they basically boil down to the film pushing hard on my ability to suspend my disbelief.

As I may have noted before, I go into most films ready and willing to immerse myself in the story and setting. I try to absorb and process what is happening, why it's happening, and in the case of a known franchise/series, how it works with what I already know about the characters and the universe.

Whereas most people these days seem to enjoy looking for 'plot-holes' and consider everything that isn't clearly broken down for them to be a continuity error, I try to reason out how it makes sense and works given what I've seen and know.

Sometimes however, I can't. Sometimes there are elements that just don't sit right with me. Sure I can excuse them or come up with excuses for them but they just don't work for me as a moviegoer.

Such was the case with Infinity War and I was bothered that the filmmakers made a movie that even I couldn't avoid deconstructing. Basically if the guy who doesn't deconstruct, and doesn't want to deconstruct, has not choice but to deconstruct your film, well then you let him down.

After watching our heroes be clever and competent for 22 movies over the course of 10 years, they were suddenly immature, inept, poorly organized, and failed to take actions at key moments that I had seen them take before, even within the same motion picture. Other abilities and moves which might have helped were completely ignored. Then it hit me...

The bad guy was going to win. Not because he was more powerful than the heroes or smarter but because that's how the writers wrote it. It felt like I was watching a RPG session where the GM had predetermined the outcome. You know how much I love that. Yeah, I despise it even more in my movies (if that's even possible).

So the remainder of the movie (a little after the half way mark) I sat wishing I had a remote to fast forward it to the end. Nothing mattered after the realization that the story was going to make (not have or let but make) Thanos succeed. Everything else was a waste of time.

Worst of all it made glaringly apparent something I had managed to forget up to that point - no one was really going to die either. Spiderman, Black Panther, they had sequels coming out. They were obviously all coming back so damn you Infinity War why couldn't you have made the journey less transparent and predictable?

Yada yada Thanos snaps, yada yada everyone's dust for now, blah blah is it over yet?

Let's just get to Endgame. 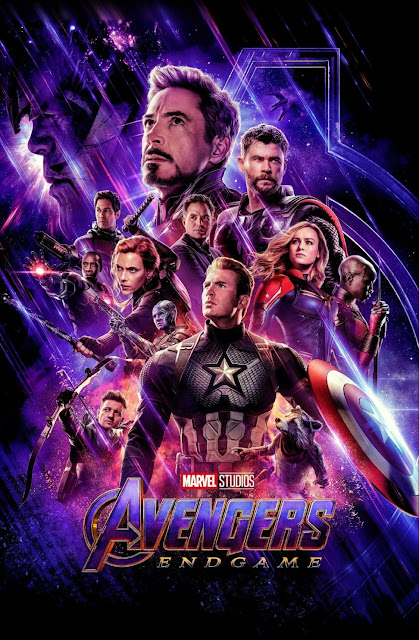 Avengers: Endgame is, for me at least, the superior movie. More than that, it stands on its own as an incredibly enjoyable installment in the Marvel Cinematic Universe franchise.

I was really, really impressed that the film was not a mile-a-minute rollercoaster ride throughout. Character development, story beats, and tension (a lost art in modern cinema) were allowed to do their part in the movie, giving the action more meaning and purpose.

Each character got to do something special, even if it was only briefly. We got to know relatively secondary characters such as Ant-Man, War Machine, and Nebula much better, not to mention a chance to shine.

One part of particular interest and amusement to me was their explanation of time travel as told to us by Bruce Banner/Professor Hulk. I was beside myself with happiness when he let everyone know it was Back to the Future or Bill and Ted style time travel but rather...wait for it...The Time Travel of 1970s Marvel Comics! OMG how cool! Seriously, if you got confused by any of the time travel bits in this film, it's because you didn't grow up playing with MEGO action figures and comics being 25 to 35 cents.

Well, those are my feelings and thoughts on Endgame. I considered using this post as a springboard to discuss how to end a long-running, successful Supers game with these movies as a framework but I am just not in that headpsace right now. Perhaps in the near future.

Half the month is already over and there is still many others subjects to address.

Until then, Avengers Assemble!