As promised last month, I have a Surprise for everyone.

Back during the month of August, the 23rd word prompt of the RPGaDay event was SURPRISE. I didn't post a full entry on that day as I was saving an actual Surprise I wanted to reveal but couldn't since the Surprise was coming from a campaign I was (and I am) currently running. The Surprise had yet to be revealed to the players and their PCs in the game, so to post it on my blog ran the risk of spoiling things for the members of that gaming group.

In that post on the August 23rd I made a promise to post the Surprise in full on September 23rd, which is today.

The cat is out of the bag now as the session that revealed the big secret was played on the first Saturday of this month. But...Unfortunately, one player couldn't make it and the rest of the group made a deal not to reveal what had happened to the missing team member.

Yes, you read that right. The big reveal of our campaign's third session and second full 'episode' is still a mystery to one of the players.

As I have mentioned before, on July 6th I started a Science Fiction RPG using a modified version of the Year Zero System created by Free League Publishing (or Fria Ligan in their native Sweden) entitled FRONTIER.

FRONTIER is based on a SF RPG concept I've been wanting to run for over 30 years. Set in a dystopian future in which the Earth is dying from years of  Human abuse and neglect, FRONTIER focuses the story on a project set up by the Smithsonian Institute and the United American governments (along with Megacorporate backers) to find a way to save Humanity's homeworld.

To this end, a group of scientists, engineers, and other specialists have been shipped 45.3 light years from our Solar System to FRONTIER Station, a Scientific Research Outpost orbiting the planet SA-2 in the 18 Scorpii system. 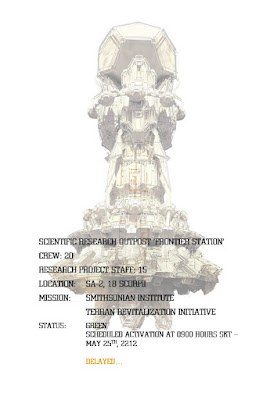 Over the course of three monthly sessions - The Pilot Episode/Episode Zero, Episode I, and Episode II - the players discover a mysterious signal that causes the A.I. of a starship to malfunction, feeding false information to the pilot and eventually other stations and equipment warning them that they are going to collide with 'Another Ship'.

The story begins with a cargo ship en route experiencing this very issue, with the ship's pilot - a cybernetically enhanced individual - suffering from hallucinations and severe paranoia as a result of the signal. He diverts him course to avoid a spaceship that simply isn't there and glances his transport against one of FRONTIER Station's exterior fuel pods. He then crash lands on the planet below, eventually shooting a shipmate dead and chasing another out of the vessel. 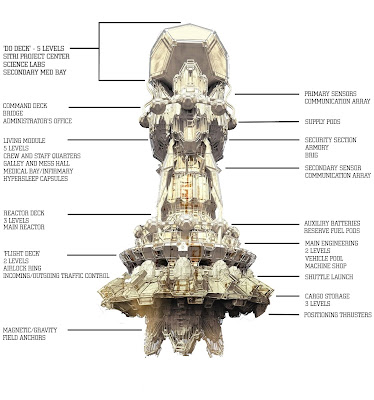 Our team is assembled to go down and look for survivors and as well as retrieve any intact cargo as we needed the shipment to fully load the outpost. In the process we find the dead Navigator, a Cargo Handler injured in the crash, and the Pilot and Warrant Officer wrestling at the edge of a cliff. Some of our team retrieves them but not before the group at the cliff are attacked by armor headed worms about the size of a large dog. 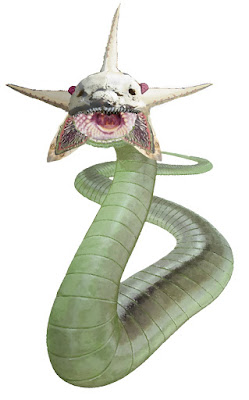 While some of the PCs engage in a quick, scary action scene with the worms, others gather some of the usable supplies, and still others investigate the wreck of the freighter. Eventually we start to piece together what transpired and the signal that caused the accident returns. The PCs begin picking it up on their own ship's systems and some of their personal gear connected to those systems.

Our vessel's Captain decides to purposefully maroon us on the planet, not wanting to take the chance that the signal might cause us to crash as well once we're airborne. Additionally, the PCs find out the Cyborg Pilot still has his gun, but before he can use it one of our Security Officers takes him out with a single punch. The Warrant Officer from the transport is revealed to be an Android, but for some reason her A.I. was not affected by the signal.

In the next session the team works to find the source of the signal and protect our ship from being affected. Meanwhile, in a sequence I am especially proud of, we find another ship, a medical rescue ship is approaching the planet. I cut to a Trauma Team Specialist PC, a new player being introduced into the campaign, and her NPC Captain letting her know they're waaay off course. Before long the medical ship and it's cybernetic engineer also get infected by the odd signal and drive the vessel into a deep dive towards the world of SA-2.

This is inter-cut with scenes of the other PCs already on SA-2 searching for two spots that may either be bouncing or producing the mysterious and dangerous message. After potentially deadly run-in with a herd of huge, stampeding, bipedal, horseshoe crab creatures, the PCs come upon another ship wreckage that appears to have been buried in the desert sands of SA-2 for a few decades. 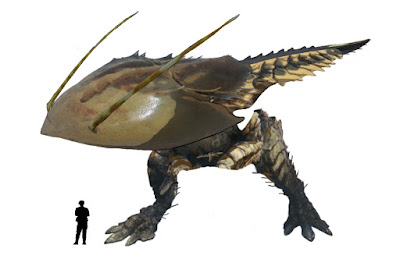 Cut back to the medical ship and we see the new Trauma Team Medic get into a Hypersleep style chamber as the NPCs frantically race to hold down their crazed Engineer and try to save their ship. Sadly...it's too late. The medical transport crashes into the surface of SA-2. I reveal the year of the crash as 2177.

"Wait a minute", says one of the players, "that's not the year. You said it was 2212." I replied that they were correct, it was 2212...currently. The medical transport Foster was lost and presumed destroyed with all hands in 2177. As several of the players, the new one included - who thinks she joined this session just to die - the others check out the wreckage in the desert which turns out to be...The Foster! Digging through both it's physical remains and what's left of it's systems they discover one survivor...heheh...a Trauma Team Medic in stasis.

After helping the newly awakened Medic and regrouping the rest of the PCs together, the group begins searching for the final signal point, which must be the source. Eventually they find it, an ancient structure deep in the sands. 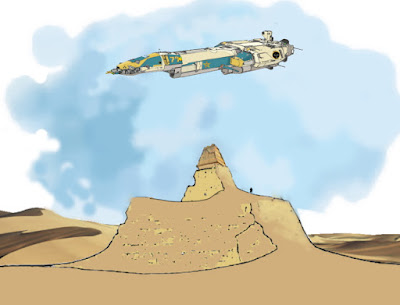 The PC group then goes deep into the bowls of a pyramid-like building clearly constructed by a non-Human intelligence in a setting with no definitive proof of sentient aliens to the players'/PCs' knowledge. Knowing that one player would be unable to attend the session, he and I worked out that his PC, the Captain and Pilot of the ship we had used to reach the surface of the planet we were on, had returned to said ship to facilitate communications between the party, himself, and the orbiting space station that serves as the PCs' home base.

After much exploration and experimentation with the 'temple's strange pictogram-like runes and various secret doors, the PCs discovered the structure was likely some sort of base of operations belonging to a species of highly intelligent beings that were at war with another, separate intelligent species. In fact, the temple may have been a way station or outpost during their conflict.

Finally reaching the lower level of the structure, the two Security Officers, aided by remote, robot drones, came upon what the scientists reasons was a research facility. They also came upon the ancient, desiccated remains of one of the aliens they believe built the pyramid. This being has signs of severe physical damage about the face and chest and was dead long before near-mummifying in this mind-bogglingly advanced tomb. The First Contact Specialist dubbed them 'The Thinkers' because of their amazing achievements and large craniums.

It was then that a shadow moved on a ledge halfway up the wall towards the very high ceiling. It darted again a moment later. Our Security Officer with the remotes instructed one of his drones to emit a high-pitched sounds, the sort audible to animals but not Humans.

The shadow leaped, clearing a distance nearly 50 feet across and 25 feet down, to land on the robot drone and force it into the ground. Although they didn't fully illuminate the entire room, many lights in the room were on thanks to the PCs messing with the  switches, buttons, and pictograms early. The creature, and it was a creature, was visible. As it stood up and hiss/roared at the closest Security Officer, I described it in vivid detail. While it has some unusual specific differences to it, the Security PCs' player thought it seemed familiar...

Oh dear. That's all the time we have. Muwahahahaha! Stay tuned...