At the time I am writing this, my last post on this subject netted only an average to good number of views and no comments.

I find this disappointing but not unforeseen. As popular and successful as The Dark Crystal: Age of Resistance Netflix Series has been, it may not resonate with the RPG gaming community or at the very least, the portion of it that visits this blog.

Hmmm. That actually makes very little sense. People coming to this blog can't be surprised I watched and loved Age of Resistance. They would certainly have to assume that if I liked it, which I really, really did, I'd want to talk about gaming it.

This makes me think I am alone in my interest in running a Dark Crystal RPG. That's a shame if true. As I've noted in the past, I see a lot of potential in a campaign set on the weird and wonderful world of Thra. Perhaps you'll read on and change your mind.

Writing has that power. As the Gelflings say, writing is 'Words that stay'.

As noted in the previous entry, I've always been impressed and inspired by the original Dark Crystal film but I've also felt that the concepts in it, the world setting of Thra, was far more amazing than what we actually got to see. I've always wanted to see a deeper exploration of this milieu and get to know its people, places, and history better.

Mother Aughra warns of possible spoilers. Impossible ones as well. 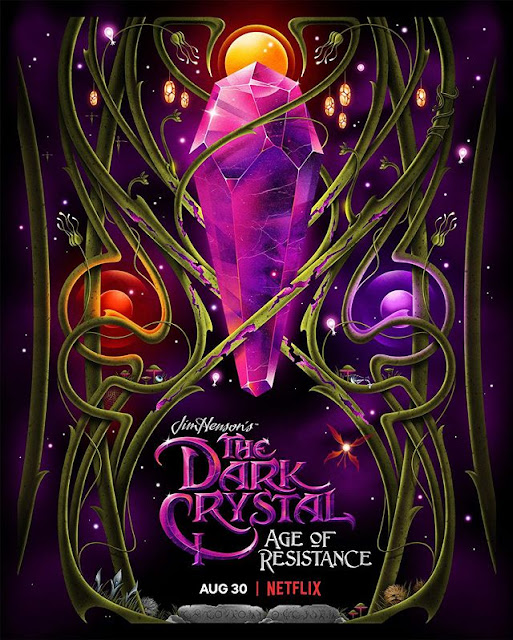 First I want to say that I absolutely loved every minute of this series. Everything from the story to the design and artistry to the combination of traditional puppetry to the modern special effects were breathtaking and inspiring. If you haven't watched it do yourself a favor and go do so. Don't worry, this post will still be here when you return. Go, enjoy!

Among the incredible feats achieved by this series was the positively perfect merging of character development and world-building.

The audience got to know many of the characters on a personal level, making them not only people you are interested in seeing the exploits of, but also giving the events weight and meaning. You care about what is happening because it is happening to characters you either like or despise.

For every cheer and chuckle thrown Hup and Deet's way, there is a boo and a hiss for SkekSil the Chamberlain or SkekVar the General. These are heroes you love to root for and villains you love to hate. Sounds perfect for an RPG doesn't it? More on that later...

As for the world-building, Age of Resistance delivered in spades by taking us on a journey across the Skarith Region of Thra right alongside the characters. Each episode added a little more detail and piece by piece the world of The Dark Crystal truly came to life.

From the Caves of Grot to the coast of the Silver Sea, the Crystal Sea's Circle of the Suns to Stone-in-the-Wood, I can clearly see Thra in my mind's eye. I want to explore it so badly! I want to go to a Podling tavern and learn more about those grounded (literally), salt of the earth (again literally) people. What secrets lie within The Castle of Crystal that we haven't yet seen? I am also eager to see more of Thra's creatures, from the 'swimmers' in the Black River to whatever beast SkekMal the Hunter made his skull mask from.

The Netflix series intertwines in a most interesting way with the series of young adult novels by J.M. Lee that finished with its fourth volume around the same time Age of Resistance began streaming.

Although not identical tales, it seems that the main characters in the novels are seen as secondary and background characters on the Netflix show. It is almost as if two different, though definitely related, parties of adventurers were going on related missions through the same world setting.The Netflix series focuses on one group consisting of Brea of the Vapra Clan, Rian of the Stonewood Clan, and Deet of the Grottan, while the books follow Naia of the Drenchan, Kylan of the Spriton, and Tavra, a Vapra Gelfling who happens to be Brea's sister. In addition, Naia's brother Gurjin is a major supporting character in Age of Resistance. The two teams cross paths at various points in each series.

That is all for now. My next Dark Crystal related post will more specifically address setting up a Dark Crystal RPG campaign and why I think it would be absolutely awesome. Though I am none to dislike Dungeons & Dragons style fantasy, the mystical yet alien nature of Thra and its inhabitants deeply intrigues me.

See you when single shines the triple suns, what was sundered and undone, shall be made whole, the two made one.