This Is The Way

I followed this Tracking Fob based on the Bounty Puck I picked up from the Guild and it lead me to... 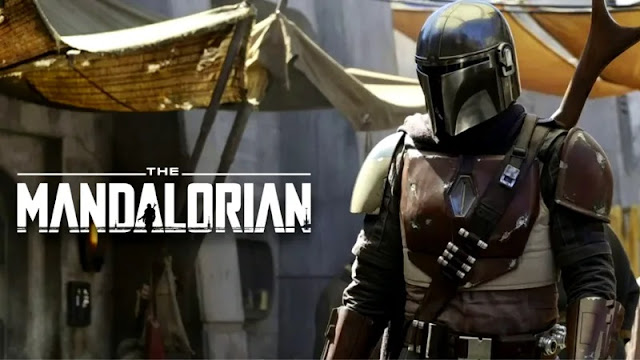 This. Is. Star Wars. 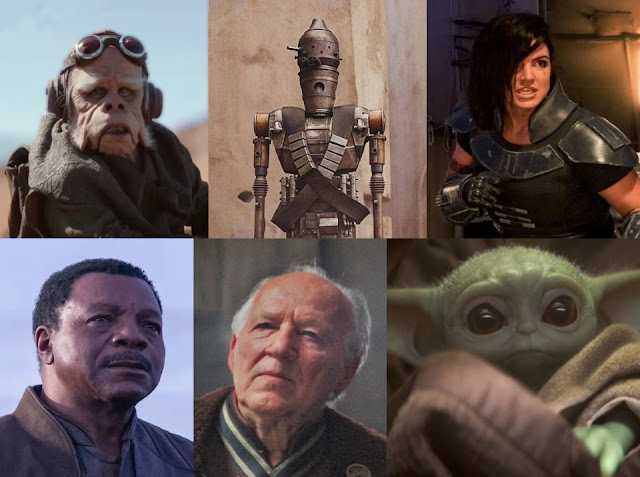 SPOILERS!
Blogging is a complicated profession...

I was grabbed by the first episode right away; I was impressed by the music, the scenery, the world-building, and of course the characters.

I am absolutely amazed by the acting and directing in the series that enables us to get a show that features a character with no face in the starring role. I mean...WOW. Every Superhero movie and TV series, please take note.

As a fan of the universe it was awesome to see some many of my old favorite elements like landspeeders, Rodians, R2 unit Astromechs, and Jawas. Of course they're Offworld Jawas (which incidentally is the name of my new Alternative Prog Rock Band) and that leads into the next great thing about The Mandalorian - New Stuff! New Jawas, New Weaponry, New Starships, Tracking Fobs, Bounty Pucks, some dangerous Alien Walrus Monster under the ice of a New Planet, and an unknown type of R Unit piloting a speeder dolly/platform. Sooo cool!

Plus, like any good Star Wars installment, each episode brings in new characters and furthers the overall plot that explores the people involved and their situations. I can't wait to find out what happens next, who it happens to, and why it's happening! 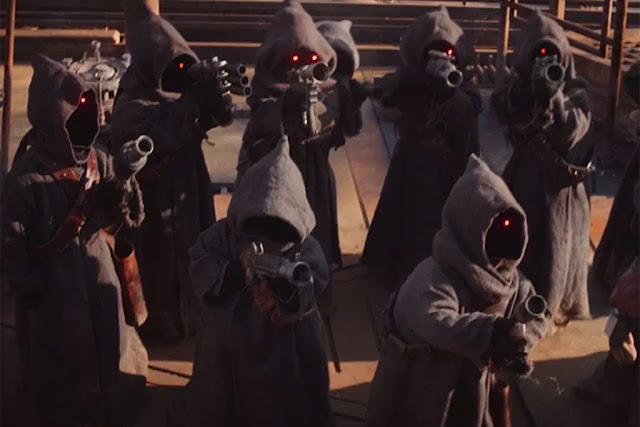 Every being put your appendages together and welcome...Offworld Jawas!

Seriously, I can't find anything bad to say about this show so far. While not every episode is as spectacular as every other, nor is every scene and moment Star Wars fandom perfectnon, nothing I've seen makes me feel any part of any episode has been poorly done. In fact, as I said to a friend recently, it's reassuring that the weakest episode of The Mandalorian is still ten times better than the strongest of the Prequel or Sequel films.

High praise? It is indeed and I stand by it all the way.

No review of the show would be complete without addressing the seven pound, fifty year old, womp rat in the room - BABY YODA! He is super cute, super well handled, and super interesting. Is he another member of Yoda's little known about species? A clone of Yoda himself? Something else? I don't know yet but I would gladly mow down a platoon of Imperial Stormtroopers or wrestle a full grown Mudhorn to keep him safe. Just try me!

Needless to say the series has really bitten me with a major Star Wars RPG bug. I am extremely interested in running a Star Wars campaign at some point early new year, regardless of how good or bad The Rise of Skywalker is.

Needless to say, I am really eager to see more of The Mandalorian. As with other, similar material, I absorb these episodes as much as enjoy them. They are definitely entertainment, but as a fan and a gamer it's also source material. Based on what I've seen so far, all I can say is keep it coming.