What You Leave Behind

I have seen a lot of gamers on Facebook, Twitter, and other social media platforms posting a query that goes something like, "What were the first three Tabletop RPGs that you played?" or "What were the first two RPGs you encountered after D&D?, the later being presumptuous if not entirely unexpected.
To me a far more interesting question would be, "Of the first five or six RPGs you played after getting into the hobby, how many do you still play?"
For me the answer is...one. 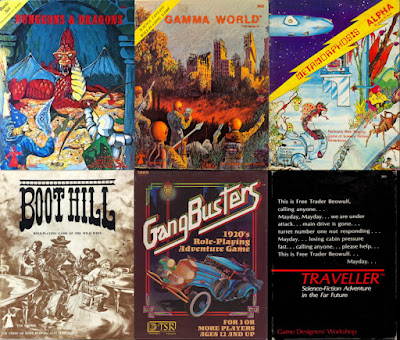 Can you guess which one it is?
Answer below.
There is exactly one TRPG of the first five or six games I've played that I still bring to the table. Perhaps once in a blue moon one of others might get some attention for a special occasion, often only for the sake of nostalgia or novelty. None have been played in a long while and it's unlikely they will see the light of day anytime soon.
With the exception of Dungeons and Dragons, I only played a short set of adventures or perhaps a one-shot of each of these. Traveller, which is incidentally the only one I still play, was a game I really did not like at first. None of the other had any real staying power with me at the time, which would've been between 1977 and 1982.
Alright that's not entirely true. I played D&D quite often as that was the most popular game in town and around 1979-1980 my friends and I 'graduated' to Advanced Dungeons and Dragons (1st Edition). We often played a mixed D&D/AD&D hybrid until we fully got the hang of AD&D in its entirety.
The big changes came in 1982 when I purchased Villains and Vigilantes 2nd Edition and Star Trek by FASA. Never a huge fan of Medieval Fantasy or Swords & Sorcery stuff, I played D&D and anything like it (Rolemaster, Runequest, Chivalry & Sorcery, etc.) less and less now that I had access to Superheroes and Star Trek.
Trying out new games became a thing for me and my buddies, a hobby within a hobby, and before long I practically never picked up a D&D book unless it was specially requested I run something.
As for the others...I ran one or two short Gamma World campaigns and turned a friend's Metamorphosis Alpha campaign into a Star Frontiers Super-Spy game for a stint around 1983. I ran a really amazing Boot Hill homebrew variant around 1979-1980 that I can't imagine I will ever surpass or even come close to. Finally, also around '83, I ran a short Gangbuster campaign that was fun and leaned heavily into film noir detective movies and novels more than the real history and crimes of the Depression Era.
Now it's 2021 and not only haven't I played any of these save Traveller is well over 30+ years, I haven't played V&V or FASA Star Trek in a very long time either, unless you count a one-shot here and there over the past two and a half decades.
How is it that some people play one game and have been playing it for so long? How do you survive without adaption and evolution? What if anything have you changed or learned about the game you've been playing for 30-40 years or more?
What are you first five? Which ones do you still play?
AD
Barking Alien
Posted by Adam Dickstein at 6:32 PM