First a little housekeeping...
Happy Holidays and Merry Christmas!
It's nearly the end of 2022 and while it was a good year for me in my non-gaming life, my 45th Anniversary in the RPG Hobby was a whole lot of disappointment. All my plans for the blog were for naught as none of my thoughts and ideas amounted to much of anything. Ugh. Total waste of 12 months.
In addition, I got frustrated and burned out with my gaming to the point where I not only couldn't be motivated to blog, I wasn't motivated to run or play after while. I have spent the past month and change not gaming but searching for a way out of my funk.
Luckily I have in the form of my planned weekly Pokemon homebrew RPG campaign set to start in January. This still leaves me needing a campaign for my Sunday group and ideas for my bi-weekly return to Star Trek Adventures. I have some thoughts and even prospects on those fronts and I'll be discussing that in some upcoming posts. Fingers crossed.
Before that, I want to finish the Character Creation rules for Pokemon: Rise and Fall. I am getting some good feedback on the material so far and my players are pretty excited. I want to apologize for the slightly disorganized nature of the Character Creation explanation. Although I am trying to be organized, my enthusiasm and excitement for particular elements are making the posts feel a little more stream of consciousness than I'd like. I hope its working for everyone. Let me know in the comments.
Now, back to Pokemon AD! 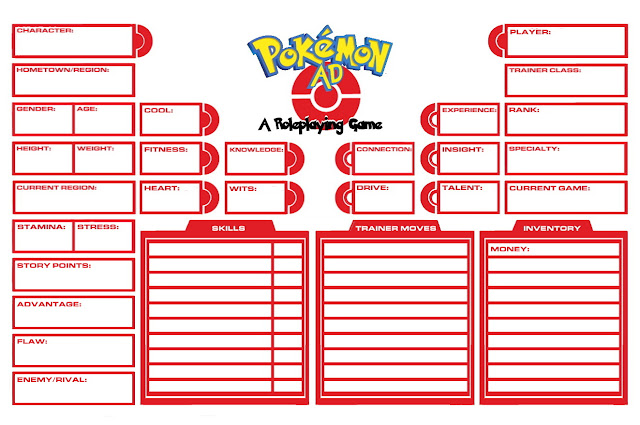 Taking a look at the left side of the Character Sheet, below the Character's basic information and just to the left of one's Skills, we have Stamina, Stress, Story Points, Advantage, Flaw, and Enemy/Rival. Let's break it down...
Stamina is a measure of a person's health, well-being, and ability to keep going without passing out. Instead of Hit Points, a Pokemon Trainer takes physical damage to Stamina as well. When you do battle with your Pokemon, swim a great distance, climb a mountain, or fall from a considerable height, you lose Stamina.
Stress is similar but mental. When your PC gets frightened, confused, extremely frustrated, or faces off against psychic powers, you lose Stress.
Player Characters begin the game with 10 points of Stamina + 1 for every die in Fitness.
They begin with 10 points of Stress + 1 for every die in Drive.
When something threatens to harm or wear down your PC, from weather conditions to Pokemon attacks, they lose Stress equal to the Attack Move or Hazard's Damage Rating +1 for every Success that exceeded your Trainer's attempt to Avoid Damage. There are numerous ways to Avoid Damage, from simply dodging to having a Pokemon Defend for Counterattack for you.
It is the same for Stress, though there it can get a little more Narrative Driven, with the context of the situation and other factors potentially playing a larger part in modifying your Avoid Stress rolls.
There will be more about this when I cover the Basic Rule Mechanics in the near future.
Note that allowing yourself to be Injured, Worn Out, or Stressed can earn you a Story Point. Which brings us to... 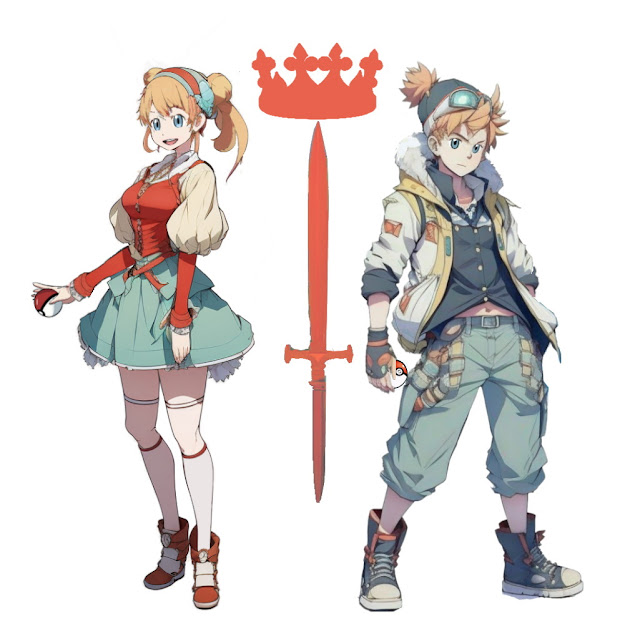 Pokemon: Rise and Fall Pokemon Trainers
Art by Midjourney, modified in Arcsoft Photostudio by me.
Story Points are points the Player can spend to manipulate the outcome of a situation, essentially giving them active agency over the story (the events in them game). Story Points can be used in a variety of ways, from doing extra damage to creating an opportunity that will enable the PC and their allies to escape a tough predicament.
Before discussing what they can do, let's talking about how you get them.
Each PC starts every session/episode of the campaign with 1 Story Point. Unused Story Points left over from previous episodes become 'Game Points' that are used to improve the Pokemon Trainer and in some cases their Pokemon. Game Points are usually recorded like this: