E is For Epic, Right From The Start

In the RPG circles I run around in here in NY, there is quite a bit of competition among GMs to secure players, a spot to play and a time that works for all. Our FLGS is awesome but not huge and there are only so many tables and chairs.

With multiple GMs, each one reserves the best table (the upstairs, back room) on whatever free Saturday is available. Players make it as often as they can to that Saturday and GMs do work with each other to accomodate their fellow referees on days when they can't make it. In other words, if I know I can't make my Saturday, I'll tell another GM so maybe he can get in an extra session of his game or make up for one he had to miss.

Now that said, if you don't garner interest in your game in the first few sessions, you tend to see a bit of player drop off. People don't want to hurt each others feeling but they just don't seem to be able to show after a while. To me, part of this is because the GM doesn't wow them in the all important First Four. What is the First Four? Well, TV show and Anime fans might be aware of it. It's basically the first month of a television series or an Anime program. The first four episodes. If you can't get people jazzed about the show in the First Four, the show is unlikely to do well. Granted the show may pick up later but in the competitive entertainment market you may not get the chance to have those later episodes aired if you can't hook'em early on.

When it comes to alot of games, what I feel is missing most from the first few adventures in a sense of Epicness. Now not every style and subject of game needs this but if you are running medieval fantasy of a D&D style, Star Wars, Star Trek, Comic Book Superheroes or any other flashy and somewhat over-the-top style universe, I want to say 'Holy Crap!' at least once in the First Four sessions. The problem is that alot of GMs and players think the start of game means low power, low level, low expectations of WOW! Why? Sure that is the traditional view but it really doesn't have to be that way.

Is this a scene in the first adventure of your Sci-Fi RPG?

I am not advocating starting a game at higher level or with more points. It's not about power. It's about feel. I can make a first level D&D adventure just as epic and exciting as a fifth level one and a fifth just as epic as a tenth or twentith. How? A simple trick I first tried back in the early eighties... 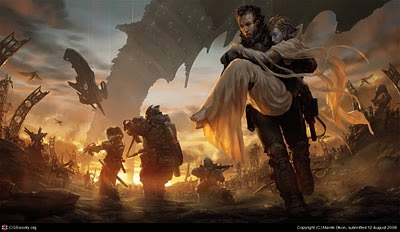 When you introduce a creature, trap, weapon or event to an adventure players should initially have little idea of its level of power. A horde of goblins (like, maybe 200) can have as many actual hit points as 4 or 5 goblins.

In one first level first adventure I ran for D&D 3.0, the players and some NPCs were attacked by an army of goblins, hobgoblins and other monsters. The more powerful NPCs took out the more powerful seeming monsters while the heroes waded through the throngs of goblins to reach a leader type. The leader was stated more appropriately for a fight between one monster and five first level PCs. In their mind's eye it looked epic. The situation appeared challenging and dire, and it was, just not as dire on paper as in the spoken word.

In another game, the PCs were on a failing starship that had been attacked by enemy forces and was now heading for an impact with the planet below (a modification of the old WEG Star Wars RPG module Starfall). Their characters had to face a malfunctioning vessel, hazards from fire and explosions to zero gravity and lack of air, all while fighting enemy soldiers and trying to escape. Brand new characters, act one, scene one, EPIC!

So in conclusion, before you send your PCs off to yet another dungeon in yet another pseudo european forest to fight rats and spiders (But they're giant rats!...Yawn...) considering a way to make their very first experience in your world an experience.

Posted by Adam Dickstein at 9:03 AM