W is for Wonder, I Got That in Spades

When I think of my homebrew D&D milieu, the one I use with my D&D-for-those-who-don't-like-D&D games, I always imagine it as both very different from what you typically encounter with a lot of other GMs' worlds and yet not so different at all. 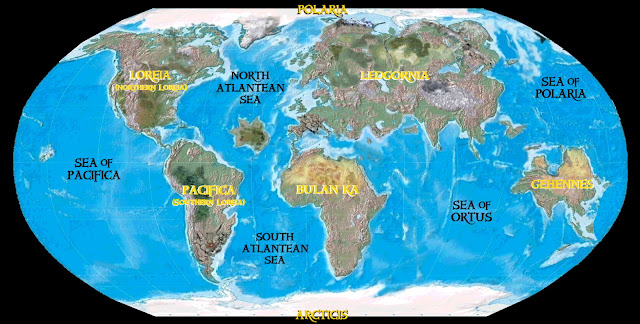 Since the thinking behind the world's development is unusual compared to that of various old school ideals, my campaign universe is definitely going to have an peculiar feel to it for many gamers.

At the same time, I was intent on making sure the world was recognizable as D&D, even if only in a very general sense. I was determined to keep Races, Classes, Saving Throws, Dragons, Vancian Magic, and numerous other staples of the game so that players would simultaneously find things familiar and be wowed by the changes.

When Jeff Rients, gaming guru and man about town, posted this entry asking twenty questions for your campaign setting, it got me thinking about trying to answer the questions for my own campaign. In many instances I can't clearly or at least easily answer the questions. The answers would be so obvious to my players and I that I don't think about how hard it would be to explain them to those that haven't experienced the setting. In a way it brought about a strange sense of wonder trying to 'retell for the first time' some of these elements.

Anyway, here goes my take on things as they apply to my world of Aerth...

What is the deal with my cleric's religion?

Each religion is different and there are nearly as many religions on Aerth as on our Earth, of which Aerth is a parallel. The Aegyteans worship a pantheon with a senile Ra, Osiris, Set, Bast, etc. The Gretha-Novans follow the deities of Olympus. The Red Brotherhood follows the Great Red One. Clerics communicate and have contact with their gods more readily on Aerth, though not always in direct or clear cut ways. Some have dreams, visions, are visited by messengers, ancestral ghosts, or see messages in strange places like clouds or flocks of birds.

Where can we go to buy standard equipment?

Unless I am misunderstanding the question, 'standard' equipment is...standard. As such you can buy it just about anyway. Even small towns and trade outposts will have some basic gear for sale.

Where can we go to get platemail custom fitted for this monster I just befriended?

It's easier than you might think. On Aerth the monster might be a friend, a member of the party, or even your character. That said, the best places are the largest and most advanced capital cities or major trade ports. I recommend Gallatain on the continent of Legorna, Rae-Uhn on the continent of Loreia and of course the island nation of Corindel.

Who is the mightiest wizard in the land?

That is up to some debate. The Master of Magicians of The Order of the Winghorn Guard is believed to be the most powerful and accomplished Wizard anywhere but that person's identity is kept a secret and numerous individuals have held the position over the centuries. Order member Omalphia of Gretha-Nova is extremely talented and powerful as is the mercenary mage Spi'Tar Pi'Ton. Some say the eccentric Ip Witspear of Witspear's Wondrous Wizardry Emporium is not only the greatest and most successful purveyor of material components in all the realm but a former adventuring wizard of considerable might and knowledge.

Who is the greatest warrior in the land?

Again this is unclear and different people will have different answers. The Winghorn Guard boasts many warriors of amazing skill including, of course, its Master of Warriors. Order member Shaylan Everleaf, a Sargent and Sylvan Elf, is perhaps one of the greatest swordsman of our time. The Half-Orc Warrior-Priest SlainShadow is deadly with both divine magic and a brutal mace. The Golem Monk called 'Rook' is the world's most accomplished martial artist.

Who is the richest person in the land?

Without a doubt, the Merchant Princes of Corindel are the richest men and women of Aerth. The standing of who among them is richer then whom constantly changes.

Where can we go to get some magical healing?

Most temples, churches and shrines will give out minor healing elixirs for a small donation to their cause. Many of the more popular and powerful religions set up hospices in the major cities to help stop outbreaks of disease, heal travelers and provide general information on health and well being in hopes that such services will turn more people over to their view.

Where can we go to get cures for the following conditions: poison, disease, curse, level drain, lycanthropy, polymorph, alignment change, death, undeath?

That is a bit more complicated. A paladin or cleric may be able to go to their own temple and wizards usually seek help from their old college or the local Wizard Guild but generally speaking many adventurers go to a local Wizard who has set up shop for just such a situation. Witspear's provides these and similar services (except death, curing death is outside his area of expertise*) at a fraction of the regular costs and only requires a minor favor in the vicinity of Mt. Oblivion in exchange for your discount.
*Actually, curing death is an epic quest in and of itself, undertaken in only the rarest of instances by the most determined of individuals. PC and NPC death isn't common in my Aerth campaigns but it is largely permanent. Resurrection simply isn't a thing.

Is there a magic guild my MU belongs to or that I can join in order to get more spells?

But of course! Several. Most likely he or she can call on the guild associated with the Wizard College they graduated from. If they went with an apprenticeship instead of a College it can be a lot tougher depending on your mentor. Elves seem to get the best of both worlds, training in a college but receiving an apprenticeship in their last year if they've display exceptional talent.

Where can I find an alchemist, sage or other expert NPC?

Again, any major city, most smaller cities and large towns, and even some villages.

Where can I hire mercenaries?

You're not from around here are you? Why would there be only one place to do a thing?
Pretty much any place but if you're looking for quality and price isn't an object go to Corindel. If you're looking for good but watching you're wallet check out Rae-Yora or Drakkenheim. If you need a guy with a pointy stick and only have a few coppers might I recommend Gruegen, Rae-Skorn, or the south of Uthster.

Is there any place on the map where swords are illegal, magic is outlawed, or there are any other notable hassles from Johnny Law?

Not...exactly. Many places require weapons to be peace bonded and you certainly need a license or clearance from the local law enforcement authorities to cast combat magic in most of the more civilized lands. Rangers, Bounty Hunters, Wizards and a number of others are considered licensed careers and a license is required to practice them professionally.

Which way to the nearest tavern?

Um...really, really close by. Usually to the left for some reason.

What monsters are terrorizing the countryside sufficiently that if I kill them I will become famous?

Depends on the region. Wendigo in the Great North West Territories. Sea serpents in the Northern and Southern Seas. Vampires and Werewolves abound in Borgovia. Demons in or near 'The Earth Wound'. Gretha-Nova may still have a Gorgon or Chimera left over from their Age of Heroes. Dragons...well its rare that you'll find Dragons. If you kill them you'll be famous...assuming you and the neighboring countryside survive.

Are there any wars brewing I could go fight?

Not at the moment. A state of cold war exists between many nations and minor conflicts do break out from time to time but open warfare is rare these days. A 'United Nations' like pact exists reducing the chance of all out war. Luckily, the Great Order of The Winghorn Guard and its charter provide an alternative to war as the Order's diplomatic counselors will be happy to mediate a negotiation between the conflicted countries.

How about gladiatorial arenas complete with hard-won glory and fabulous cash prizes?

Still popular in Gretha-Nova, though much more organized and less barbaric then those of the early days. A variety of other professional sports and contests are held in arenas and theatres throughout the world these days, as are musical and stage performances.

Are there any secret societies with sinister agendas I could join and/or fight?

No. Of course not. There is no Circle of the Shattered Rainbow. It's just a myth. An old folktale. Let's not talk about them anymore since as I said, they don't exist.

What is there to eat around here?

Gallatain has some of the finest restaurants in the world, though Rae-Uhn has a greater array of choices. Elven dishes are currently the rage with Hltheen Ei'Gehr being very popular. It is basically a salad made with vegetables grown exclusively in the Wood Elven land of Sylvandel that can fill up even the most demanding meat eater. Most describe it as savory and hearty though it looks to be fairly plain greens with carrots and a few radishes.

For seafood fans I highly recommend 'The Cove' in Corindel, the 'Shell of Fulfillment' in Atlantandel (or Atlantis as it is often called) and of course numerous restaurants and inns in Nihon.

Any legendary lost treasures I could be looking for?

Many but some of the most intriguing to date are the artifacts connected with the Lost Era of Rae. In the Freelands of Rae are several instances of magical machines, complex devices powered by magic such as the Machine of Lum The Mad, the Mighty Servant of Leuk-O, and the Great Golems of Rae-Uhn.

Other items of interest are The Philosopher's Stone, The Weapon of War (War as in the Four Horseman of the Apocalypse), one of the numerous Rings of Gax (in Aerth's multiverse there is one Ring of Gax for each plane/dimension in a fashion similar to the Green Lantern Rings having one for each sector), and The Unwritten Book.

Where is the nearest dragon or other monster with Type H treasure?

I don't know what that means exactly. I'm going to imagine 'Type H' means a lot of treasure. Since my world doesn't exactly have random treasure strewn about, it would really depend upon where you are in the world. Dragons are best handled by professionals for reasons other than stealing their treasure. If that is your only motivation for fighting one you will most surely die. The Dragon will then find out where you lived or came from and go destroy that town down to the last man, woman, and child. Dragons are serious @*^t on Aerth.