Return of the Jedi

Just a quick update as I am pretty busy today, but I realize I haven't posted much this month. It's already the 7th of October, and this is only my second entry. Ugh.

As noted in my last post, I am gearing up for a new Star Wars campaign using the WEG D6 system with a gestalt group combining members of my old New York High School gang, my New Jersey gang, and one new edition who is a friend of a NJ player. Right now there are only four players, plus myself, but we'll see. Others may join later.

I am astonished at how easy it's been to assemble this game. Even the creation of the campaign concept has gone smoothly. It's like magic. I suggested some ideas, people talked, one idea got mentioned both seriously, and jokingly a few times, and we all decided that if it caught our imaginations that fast then that's the winner.

Then characters - One fellow came up with a very basic idea, a Human Smuggler with a bigger, heavier freighter than the famous Millennium Falcon, and then he needed a co-pilot/partner - Who's that guy? What's his deal? Next thing you know we have an Ithorian Fixer, a social type of character who knows someone who can get you thing you want no matter where they go. 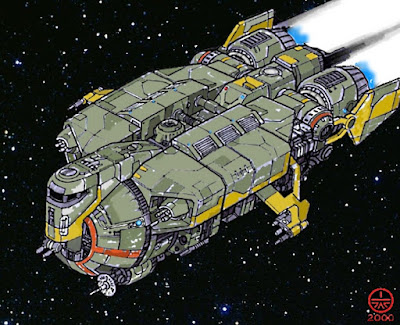 Design and Illustration by the incredible Jeff Carlisle
Colors by Me.
Background by NASA.

It's all falling into place so effortlessly.

I can't wait to see what the remaining characters are like, and what they decide to do in the setting. I have a general idea of the campaign's theme, and some of the plots I'm scattering among the stars.