Continuing my first Campaigns I Have Played entry covering the only the Star Wars RPG campaign I was ever in as a player, I'm going to add a few new features in addition to those I regularly have in my Campaigns I Have Known series.

The first new feature I've already added, as the previous post contains a reference to who the Gamemaster was for this campaign. In the Campaigns I Have Known version of this series, the GM is always me (or me, with a few sessions run by other here and there).

Another feature, which I am thinking of applying to future entries of both my '...Have Played' and '...Have Known' posts, is Opposition. Basically, a summary of the opponents the PCs faced during the campaign.

Lastly, there will be a section called Player's Perspective. It is here that I will give my personal feelings about the campaign, and how it was run and played from a player's point of view. As I prefer to GM, this section may have a Gamemaster's slant to the review. 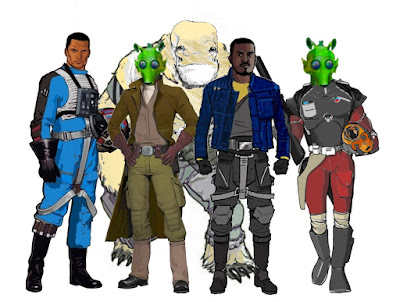 From Left to Right:
Tag Aether, Dreg, Alec Raydawn, Reek,
and Hud Choban (rear)
Opposition: The main enemies of the PCs in this campaign were intergalactic crimelord Chuuphga Two-By-Four, an Imperial Admiral, and an Inquisitor. Other reoccurring opponents were several Bounty Hunters, numerous minor Imperials, and the competing crimeboss Gumbad the Hutt (and of course his henchmen).

The most memorable villain was, by far, Chuuphga (pronounced CHOOF-gha) 'Two-By-Four'. A Pho Ph'eahian career criminal who started as a small time hood under a younger Jabba the Hutt. Making his way up the ranks, he eventually took the initiative and gave himself a promotion to kingpin of his sector. The previous crimelord retired. Permanently. Due to blaster fire.

A mix of movie mobster styles, Chuuphga could best be described as a Russian Mob Goodfella. He was polite, reasonably well mannered, cordial, and warm if not exactly charming. He was also ruthless, randomly killing minions who displeased him.

Chuuphga was humorous, smart, and honestly scary. We were far more worried about dealing with him and his minions than we were the entirety of the Imperial Forces sent against us.

I recall the voice of the Admiral having a classically sinister British accent. Other then that, I don't recall much about him. He was pretty clever, but terribly arrogant. It was easy to fool the Admiral by playing off his perceived self-importance.

The Imperial Inquisitor was cool in that he was very different from what you'd expect. He wasn't the typical athletic, physical sort as much as he was old, sage-like, and wizardly. He was much more of an advisor and deeply knowledgeable about the Jedi texts that the Imperials were attempting to uncover. 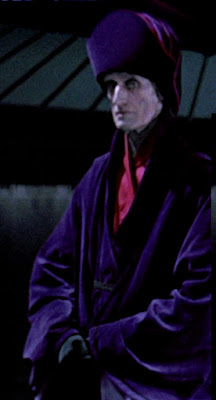 Our Imperial Inquisitor was more like one of the Emperor's Advisors
as seen in Star Wars - Episode VI: Return of the Jedi

Synopsis: Local legend on the planet Ord Itani says that there was once a notorious gang of pirates, scoundrels, and other riff raff who met at the Laughing Gundark tavern, and eventually used it for a base. The gang became known as 'The Laughing Gundarks' themselves as a result. Eventually the group was wiped out by their rivals, 'The Smiling Banthas'*, and by the early rise of the Galactic Empire. The establishment was driven out of business by it's association with the name of the gang.

Several years later, the cantina opened up again using the pirate den identity as a theme to bring in customers. As the planet was now on the very outskirts of Imperial jurisdiction, controlled more by Hutt crime families, no attempt was made to dissuade the owner from using the name. In fact, keeping up the idea that the Laughing Gundarks were a thing of legend, and not something real, benefited the Imperials and the Hutts.

Many years went by before an employee of the Laughing Gundark Cantina, the Uchoda mechanic named Hud Choban, got involved in an after hours altercation with some local gangsters. A group of Chuuphga Two-By-Four's goons, and a few others he didn't know were trying to start up a fight with a Rodian whom Choban thought he remembered from earlier that same day.

Choban decided to step in and assist the Rodian, as a second Rodian (the one Chodan had actually seen beforehand) joined in the fight. Well, sort of joined in the fight. Stumbles into it is more accurate. The three of them end up in a pitched battle between themselves and the various blaster totting thugs.

Escaping their opponents, the team runs into Alec Raydawn, a scoundrel also on the run from Chuuphga's gang. Together they make a play for Dreg the Rodian's ship, the Green Sun Endeavor. Unknown to the four, their movements have been followed by Mercenary Pilot Tag Aether, secretly a Rebel Operative. Using his Toscan 8-Q starfighter, Aether covers the Green Sun Endeavor's escape. The Transport, and the fighter communicate, then depart together, with Aether giving the others the coordinates for a safe haven on the planet Nanador.

The campaign then follows the group as it goes on the run, hoping from planet to planet, sometimes on the defensive, sometimes on the offensive. While trying to avoid prolonged engagements against Chuuphga's forces, and those of the Imperial Empire, the group actively pursued their enemies from time to time to find out what they were up to. The PCs were also out to determine why Chuuphga and the Imperials had joined forces [unbeknowst to the galaxy at large].

It is eventually revealed that while hiding out on a remote, abandoned, mining colony planetoid as a younger man, Chuuphga discovered some sort of Jedi Temple buried deep beneath the surface. The structure turned out to be more a library then a temple. After being rescued by his cronies, the crimelord hide the truth about the planetoid until he could find a way to exploit his findings. He eventually bought the planet with his ill gotten gains, and contacted the Empire. Working together, the two parties hoped to bypass the library's hidden defenses, and excavate any useful texts, maps, or other materials.

We (the PCs) performed a number of hit and run attacks against our adversaries in the later half of the campaign, getting bolder and more confident as the game went on. We learned the truth of what they were after, and pursued a plan to thwart the enemy. Eventually we were able to disable the Admiral's strike cruiser, killing him in the battle, and badly wounding the Inquisitor. The final fight was actually against a Sith Spirit possessed Chuuphga in the ancient, lost Jedi library. Chuuphga, true to his nature throughout the campaign, is able to fight the possession (with our help and encouragement), enabling Raydawn to banish the Dark Side Phantom to the nether reaches of the galaxy.

The game ends with the team, 'The Laughing Gundarks', turning the location of the Jedi Library over to Luke Skywalker just after the Battle of Endor. Luke considers taking on Alec Raydawn as an apprentice after he gets the chance to read through some of the texts in the library.

Appendix N: In addition to the Original Trilogy, and some material from the Han Solo novels by Brian Daley, there wasn't a ton of expanded universe information back in 1989.

Wait...that's not true. There was the RPG.

Our GM, Peter C., used a ton of the material found within the West End Games produced RPG to aid in the 'world building' of our campaign's particular take on the Star Wars Universe. Several modules, sourcebooks, and related supplements factored into our story, often with the names, locations, and such altered to fit our game.

In addition, a number of other films from the 70s, and 80s served as inspirational material for the theme, and atmosphere of our campaign including:

Dog Day Afternoon, It's a Mad, Mad, Mad, Mad World, The Poseidon Adventure, Raiders of the Lost Ark, and Take the Money and Run (as well as many others).

I played this campaign while attending my first year of college. Most of the players were friends, and classmates I went to college with. We were all artists (it was an art college), and the game had a good deal of artwork made for it as a result. Sadly, I do not have any of it anymore (the GM kept most of it). All the illustrations in these past two posts were either obtained from other sources, or drawn specifically for these entries.

I created detailed deckplans for my ship, the Green Sun Endeavor. I had the bridge/cockpit layout, knew where each character's room was, and even accounted for secret panels, and hidden cargo holds.

The overall look of the Green Sun Endeavor was based on the arrow shaped ship in this painting by Peter Elson and the Star Bird toy by Milton Bradley.

For a few sessions we were on a planet that translated the name of the ship...poorly. 'Green Sun' was the nickname for an illness one could catch from too much exposure to the local sun. Endeavor was oddly translated as well, believed to be a term for a never-ending, or ongoing process. The natives called my ship the Unending Incurable Illness. Very embarrasing.

A number of other players stepped in to run NPC guest stars. Most were one-shot appearances, while a couple would appear, and then come back several sessions later for another episode.

Our GM used a surprisingly large number of modules in the campaign. Many elements of these modules were changed to fit our campaign, but pre-prepared adventures were fairly common place. For example, the adventure Tatooine Manhunt, the first Star Wars D6 module produced if I am not mistaken, was set on the original planet of Pumot, a volcanically active world of ash, fire, and stone. Although the location and some other elements were changed, the plot - find a hero of the Clone Wars thought long dead while evading bounty hunters - remained unchanged. 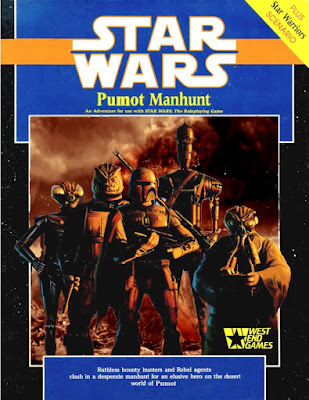 Player's Perspective: NEW FEATURE! What I really liked about Peter as a GM, and especially as a GM of Star Wars, was his excellent use, and command of pacing.

Chase scenes and battles had a fast, often frantic pace. Planning scenes were given time to happen, but then something would complicate matters, and get us moving again. We had moments of downtime to think, relax, and catch our breath, but not for longer than necessary. Never so long that it slowed down the game's overall pace.

Peter was also good at creating memorable NPCs. Their quirky natures, accents, and distinct personalities made them fun to encounter, as well as easy to love, or hate. Of particular distinction were the droids 'Wendy', and 'Ruby', the bartender/owner of the Laughing Gundark Cantina, and of course everyone's favorite crimelord, Chuuphga Two-By-Four.

Well, that about wraps up my first 'Campaigns I Have Played' entry. Sorry it took so long to complete. October turned out to be incredibly busy, and not entirely smooth sailing for me in the real world.

Now we're about to embark on November, and I have a lot of ideas and thoughts I'd like to get out so let's hope for the best, and see if I can get back to posting more regularly.