Prior to this post, I have tagged exactly one entry on my blog with the label Sentai.

Sentai, now officially 'Super Sentai' since 2000 and the fancy new logo, is the name given to the long-running (40+ years now!) Japanese superhero team genre. The word Sentai directly translates to 'fighting team'. This series of shows is identified as live-action, produced by Toei Co., Ltd., and Bandai, although the term Sentai is sometimes used to describe similar series of Anime/Manga, and shows by these, and other companies.

While I am certain I have brought up the subject of Sentai elsewhere, perhaps only in passing, I do not appear to have ever made a dedicated post on the subject. 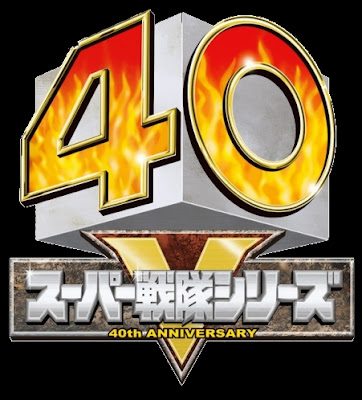 
For those unfamiliar with the shows, they are of the tokusatsu genre, featuring live action characters in color-coded costumes, performing exaggerated martial arts, or other acrobatic combat moves. The shows uniformly feature a giant robot, super-science, or magical powers and showy, but simple special effects (bright flashes of light, colored smoke, etc.). The programs are (generally) aimed at children, or younger audiences.

The Super Sentai Series is one of the most prominent tokusatsu productions in Japan, alongside the Ultra Series and the Kamen Rider Series. Currently the shows air along with the other similar programs in the Super Hero Time programming block on Sundays. Outside Japan, the Super Sentai Series is best known as the source material for the Power Rangers franchise. Note that while not a live action program, Gatchaman, which aired in the United States and elsewhere as G-Force, or Battle of the Planets, is also considered a Sentai show, possessing many of the same qualities, and tropes.

I've been a fan of Sentai for many years, having accidentally discovered it in the early days of cable TV. My father lived on a mountain in Northern New York State, where one neighbor higher up on the mountain had a satellite dish, and one below him had a another set up (I don't recall what it was). Located in the middle, my Dad's house sometimes caught foreign TV programs. 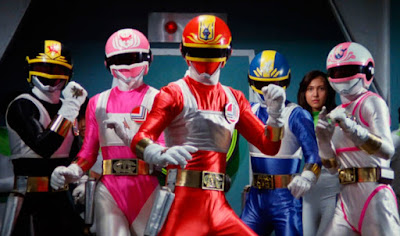 Some years later I would work for the various comic book/toy/fandom product stores that carried Sentai action figures, robots, and art books, reigniting my interest in the genre.

The typical Sentai, or Super Sentai, series revolves around five young adults who are granted special abilities and weaponry by some outside force for use in battling an evil entity, or organization.

The members of the Sentai team may be from different walks of life, or they may have been trained by the military specifically for the purpose of being a Sentai team. They are each given a device that transforms them from normal people into Super Sentai Superheroes, complete with cool, color coordinated costumes, and magical, or high-tech gear.

Each color represents something different, and governs the characters role on the team, and even their personality to some extent. For example, the team leader is always the Red member, and whatever else they may do they are strong-willed, morally good, and great at motivating their friends to battle evil. Blue is typically a scientist, or scientifically minded, etc.

Usually each member has a unique weapon, or device such as a sword, a shield, a lasso, a spear, or some other item of power. Other times, every member will carry the same array of armament, like everyone having a laser pistol, but are given some special feature to make it theirs.

Another common element is each member having a unique vehicle, which may transform into another shape. Following the third Sentai series, the group can summon a Giant Robot, or combine their vehicles to form one.

The villains of the Sentai genre are typically an alien empire invading Earth, a secret, underground organization such as Hydra, or G.I. JOE's Cobra, or a hidden civilization trying to conquer the world. My favorite bit is that there is usually a main leader, a set of lieutenants - each with their own special abilities, personalities, and agenda's, and a horde of faceless goons. A common weapon/tactic of the enemy is to create some kind of monster to cause trouble, then enlarge it to Kaiju size requiring the Sentai team to battle it with their mecha. 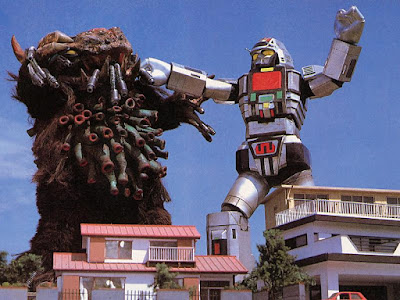 Around 1990 two good friends of mine introduced me to friends of theirs who lived in New Jersey, and who were involved in a Sentai RPG campaign. It was there that I met the members of my oft mentioned New Jersey Group.

The campaign itself was...well...let's just say it's one of the few RPG campaigns I've ever encountered that required one of those PTSD Support Groups afterwards for the players to deal with their experience. I never played it myself, but after watching an entire session I went to go sit alone in a dark room, contemplating the thought that perhaps this whole RPG thing had been a waste of my time and I should consider taking up stamp collecting as an alternative hobby.*

While I have run a few Sentai one shots here and there, and I did run a short Tokusatsu** campaign, I've never gotten the chance to run a full on Sentai game.

I recently learned of a RPG produced by Stupid Dice Studios called Super Happy Sentai Hour. My friend Leo alerted me to it when he discovered there was a Kickstarter for a new improved version.

This got me thinking...

I will be meeting up with the old NJ crew again sometime this summer in celebration of our long friendships and the memory of our friend Allen, who passed away this past March. I have been asked to run a one-shot game for the event, and I can think of no better subject than Sentai, returning to the genre that introduced us to each other over twenty-five years ago.

Lime-Green Wombat***, this one's for you.


*This actually happened. My friend Martin found me downstairs in the house we were in sitting alone in the dark. When he asked if I was OK I replied, "Perhaps I was wrong. Maybe RPGs...aren't a good thing. Maybe...hmmm...stamp collecting seems appealing." He proceeded to run over to me, lift me up by my shoulders and shake me saying, "Snap out of it man! It's going to be OK!"

**Tokusatsu is a general term for Japanese live action programs, or movies with lots of special effects. Sentai is it's own entity, as are Giant Monster/Kaiju features, so when I refer to Tokusatsu I am generally talking about non-Sentai Japanese superheroes such as Kamen Rider, Ultraman, and Kikaider.

***Allen was not in the original Sentai game, but there was a running gag that he would join as an additional member of the color-coded team as...The Lime-Green Wombat! He owned a t-shirt so shockingly bright green that it hurt to look directly at it.