This Thorough Thursdays entry was supposed to have gone out yesterday, but I came down with a terrible cold, and forgot to publish it. Gomen nasai!

Prior to this post, I have only tagged three posts with the label Cyberpunk.

Those posts refer to the Cyberpunk 2013/2020 Role Playing Game by R. Talsorian Games and the genre as a whole respectively.

Three posts labeled Cyberpunk by a Science Fiction fan who loves the concepts of artificial intelligence, robots, and Anime/Manga. 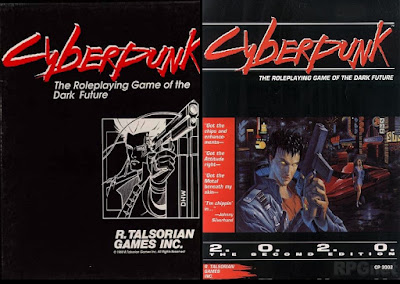 I first discovered the term Cyberpunk through my uncle, a brilliant fellow and an avid reader of Science Fiction. He was especially interested in SF works that address changes in Human nature, culture, and thought brought upon us by advancements in technology.

After reading a number of novels in the genre he recommended them to me, namely Hardwired and Voice of the Whirlwind by Walter Jon Williams, Neuromancer, Count Zero, and Mona Lisa Overdrive by William Gibson, and Blood Music by Greg Bear.

I became quite a fan myself, and since I am influenced as much by cinema as literary works, I became further inspired by the film Blade Runner, and the often underrated TV series Max Headroom.

This all lead me to the R. Talsorian Games RPG Cyberpunk 2013, and its follow up, Cyberpunk 2020. I ran a lot of 2020, often altering it a bit to reflect more of a Blade Runner setting and feel. I also tried my hand at Shadowrun, 2300 AD, and other games with significant Cyberpunk elements.

Around 1990 I discovered the Japanese RPG Metal Head, a Cyberpunk RPG that also included space travel, mecha, and other elements that really appealed to me. I ran a few games of that as well. 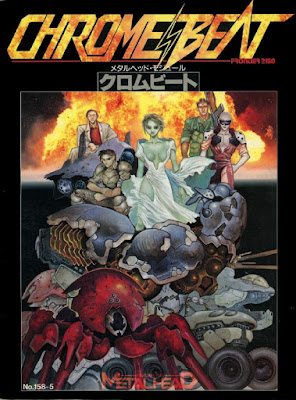 Many of my Traveller campaigns contain heavy Cyberpunk influences in the way technology and corporate culture interact with the people of Charted Space and the Third Galactic Imperium. .

Cyberpunk is a strange genre. It really should be jarring, thought provoking social commentary and sometimes it is, but it is just as easily an excuse for technology-porn, and non-stop action.

How many Cyberpunk stories have cybernetics? Most, if not virtually (pun intended) all.

How many Cyberpunk stories feature 'punk'? Not many.

Punk is traditionally a social movement born out of the frustration and angst of the working class. It bucks tradition, corporate culture, and celebrates freedom, non-conformity, and the establishment through acts of counter-culture rebellion.

Does Cyberpunk actually do that?

As noted, sometimes it does, but other times the main characters of Cyberpunk stories end up working with, or at the very least within, the confines of the established authories to take down other interests who aren't all that different in the grander scheme of things. For example, Major Motoko Kusanagi of Ghost in the Shell isn't some punk rebel trying to stick it to the man, but rather a kind of police officer - She is the man! Well...you know what I mean.

Wouldn't a true Cyberpunk hero, or heroine have no cybernetics, avoid the 'net', and try to dismantle the oppressive culture of megacorporate government control? Are Shadowrunners really Cyberpunk if they go on runs for one megacorporate patron against another? That's just facilitating the situation, not rebelling against it, which is the real definition of punk.

For a time it seemed that Cyberpunk in the classic sense had fallen out of favor. Real world scientific advancements had shown that biological, not mechanical, improvements were the logical next step. Also, things stated to look less dystopian, and an oppressive corporate culture less likely to prevail.

Now, things have swung back the other way. Between the current world political and social climates darkening yet again, and improvements in the fields of prosthetics and virtual reality, the outlook for our future seems more Cyberpunk then ever. Is it just a coincidence that Blade Runner is getting a sequel now, and they finally put together a live action Ghost in the Shell film (crappy and poorly handled as it was)? 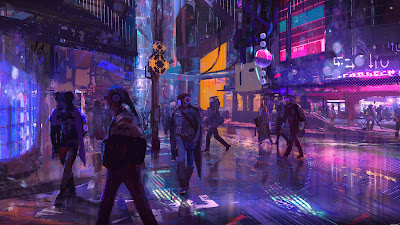 Recently Age of Ravens started a Cyberpunk retrospective of sorts as part of his History of RPGs series. One of the podcasts he's involved with, Play on Target, released a recent episode covering Cyberpunk gaming as well. Check them out won't you?

In the end, I am going to say I am a fan of Cyberpunk, especially its presentation in games, Anime/Manga, movies, and television. At the same time, I see it in a fashion similar to how I see Fantasy. It's a guilty pleasure for me this genre, since I don't feel like most of the Cyberpunk we see is truly what Cyberpunk is, or what it could be. The Cyberpunk we get is over-the-top, sensationalized Cyberpunk, and that's the opposite of what Cyberpunk should be.

What are your thoughts on the subject?

Posted by Adam Dickstein at 1:52 PM