As such, there is more than ample room for the many stories we Humans dream up, and set among it's potentially infinite reaches.

While I may not like what the powers-that-be have done with my beloved Star Trek, someone out there will. Someone, heck, a lot of someones, will find it interesting, and exciting, and maybe it will inspire them to watch other Star Trek shows they haven't seen before. Maybe they will want to play a Star Trek RPG, or run one.

That's pretty cool, regardless of my personal feelings on the product itself.

Luckily, there are other options for things that will inspire me to explore distant worlds. There's The Orville of course, and, oh yeah, have you seen a little thing called...


I am so eager to run a Star Wars game it's ridiculous.

My only problem is that most of the people I know who would participate don't really want to play Star Wars. That is, they say they do, but the stories they want to tell aren't very Star Wars-y.

They're into painting the New Republic as flawed and no better than the Empire, or talking about the economic and political ramifications of a huge galactic military, or, you know, anything and everything in Star Wars that isn't Star Wars.

The new trailer has all that, and more than a dash of pathos as well, but it still feels very Star Wars.

Say what you will about The Force Awakens, that is was far too derivative of the original film, A New Hope, but it got Star Wars feeling like its old self again after...*shudder*...the prequels. It had the right look, the right feel, and it reintroduced us to a Star Wars universe that felt familiar, and yet still has some new things to offer.

I am hoping this film does the same. Yes, I'd like to see a bit more originality, but honestly, not too much. I don't want to see the universe I love become a different universe that I don't. That's basically what's happened with Star Trek, and that makes me sad. If it becomes a choice between doing that, or rehashing classic tropes, please rehash away! I look forward to seeing another lightsaber duel between a black armored space knight, and a naive young hero, with some sort of Sci-Fi vista in the background. I am good with that.

Anyway, I don't have much else to say on this just yet. It's early, and the film is still two months away. I have no immediate plans to run, or play Star Wars, but its certainly on my mind and, well, you never know.

Some other news, and notes...

This past weekend I attended New York Comic Con. I had a great time, largely because I spent it meeting up with old friends, and one new one. 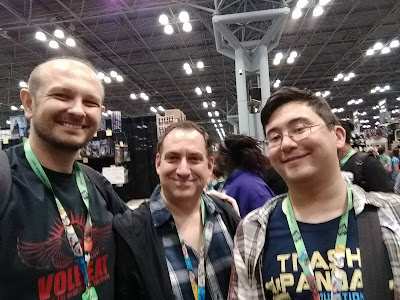 The fellow on my right is Jose Viruete, a fan of this blog since 2010, who has commented on various posts here and there. Jose lives in Spain, and came to the States as part of a vacation that included attending NYCC.

The chap on my left is my good friend Ray, a member of my gaming circles for a few years now, and mentioned  in posts off and on.

We had a great time talking about Science Fiction, Superheroes, and RPGs, and the unique elements and differences between those in Spain, and the US (as well as a few other places). It was a wonderful conversation, and Jose is the nicest of nice guys.

If you read this Jose, you are welcome back anytime! Next visit we'll go to lunch, and grab a beer, or something.


As it turns out, October isn't just for Halloween anymore. No sirree! A lot of cool stuff is coming out this month, and if time allows, I will be covering, or at the very least posting some thoughts on the various releases. They include:

Red Dwarf Series XII - Which will see the return of Norman Lovett, the original Holly, after 18 years!

Plus, all the CW Superhero programs have started back up, and I'm looking forward to Flash, Legends of Tomorrow, and Supergirl. Arrow is my least favorite of the shows, but last season was an improvement on the previous two, so hopefully it will get even better this time out.

Alright, that's all for now. Catch up with you again soon.

Posted by Adam Dickstein at 9:53 AM