"Passion is one great force that unleashes creativity,
because if you're passionate about something,
then you're willing to take risks."
-Yo-Yo Ma

There are a lot of fandom subjects that I'm passionate about, but few as strongly as Star Trek.

Although the original Star Trek television series went off the air in the same year I was born, I fondly remember watching it with my father when it was re-run on our local TV channel on the one evening a week when he was off from work as a police officer.

Star Trek reminded me of my Dad back then, and vice versa.

The characters were men, and women in uniforms, protecting their families, friends, and neighbors from hostile forces who might seek to steal from, or harm the good citizens of the United Federation of Planets.

Additionally, they embraced the task of exploration, meeting new people from far away places, helping strangers in need, and discovering things about their universe, and about themselves.

Star Trek, like DC Comics Green Lantern Corps (one of my other favorite things) combined my two dream jobs as a child - Policeman, and Astronaut. What could possibly be cooler than that?

Much changed as I got older, but one thing that didn't was my love for the optimistic, 'better tomorrow' of Gene Roddenberry's Star Trek universe. Apparently, I wasn't alone, as the original series spawned a series of motion pictures, four spin-off series, hundreds of novels, and books, and of course Role Playing Games.

Now, 48 years after the first series ended, yet another series has been produced that embraces the philosophy of Human, and extraterrestrial mutual prosperity through putting aside our differences, and embracing what makes each of us unique. A series that celebrates diversity, discovery, and flat out Space Adventure Fun!

I am of course talking about... 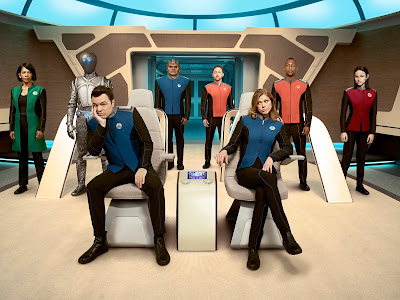 What? You thought I meant another show? A different show? Really? What...

I shall discuss the utter disappoint that is STD some other time. Suffice to say, no program has ever had more appropriate initials.

If you are a fan of Star Trek, truly passionate about the kind of Action-Adventure Science Fiction that sometimes asks tough questions, and doesn't have easy answers, then the show you are looking for is The Orville.

A love letter to both The Original Series of Star Trek, as well as The Next Generation, The Orville is the brainchild of Seth MacFarlane, a multi-talented fellow best know for the long-running animated comedy series Family Guy. In addition to other spin-off series, he also created the wildly popular film Ted, and serves as executive producer for the Neil deGrasse Tyson hosted space science series Cosmos: A Spacetime Odyssey (based on the show Cosmos, hosted by the late Carl Sagan).

Seth is, it turns out, a Sci-Fi geek, and a huge Star Trek fan. He had a reoccurring support role on Star Trek: Enterprise, and has always wanted to do a Science Fiction series in the vein of Star Trek.

As a matter of fact, it is now coming to light that Mr. MacFarlane approach CBS about producing a new Star Trek series sometime ago, but was turned down. Like any bold explorer he didn't let that stop him. Instead, he decided to make his own and as far as I am concerned, he succeeded!

The Orville is great! It is a fun romp through an all-new Space Opera galaxy that feels at once familiar and brand new. There is more than a touch of humor in the show, and while not always hilarious, the drier and more subtle jokes are very funny indeed. They lighten the mood, and at the same time make the characters seem more Human.

The characters are my favorite part of the show. I like these people. I would hang out with them. I'd love to catch an old Earth flick with Malloy, and Lamarr, talk futuristic weapons with Bortus, see if the awesomely capable and adorable Alara wanted to go for hike on some alien world, and find out if Isaac dreams, and if so what about.

That's not even addressing Captain Ed Mercer (played by Seth himself), who is a huge Muppets fan (just like Seth himself). We have so much in common! Then there's Commander Kelly Grayson, Mercer's ex-wife and a former Agent of SHIELD. Heheh.

What's a good Sci-Fi show without cool tech though, am I right? We've got it all here on The Orville. The ship itself is awesome (designed by a friend of mine - No kidding! - A guy I went to high school with. I found out he was the lead designer), with Cutting Rays, Tractor Beams, Deflector Shields, and a Quantum Drive based on the Alcubierre Drive.

The characters themselves are armed with energy weapon sidearms (yet to be named as of this writing), and 'Comm-Scanners', which are a combination of a Communicator and a Tricorder (Comm-Scanner is not the official name, as that too has not yet been confirmed).

The uniforms, the aliens, including the villainous Krill, ALL SO COOL!

The stories are a mix of classic Science Fiction tropes, and in at least one instance, real, thought provoking moral questions. There's only been four episodes for far, so it remains to be seen which style of story will dominate the episodes. I'll point out that the series format is more episodic, with traits carry over from one episode to the next, but no big meta-plots. I am so relieved. Take me to a new planet each week! Let's meet god-like aliens, and evil space pirates! I am so tired of the, 'What? You missed one episode here and one there? Well now you'll never understand the opening of Season 3 and the intricate layers of intrigue we've so carefully developed'. Bugger off you! What's the matter? Not skilled enough to tell a story in an hour?

Anyway, you know me, when I get this excited about something, I just have to game it. So, as a bit of a side project (you realize that I have as many side things going on as a box of D20s right?), I'm working on this... 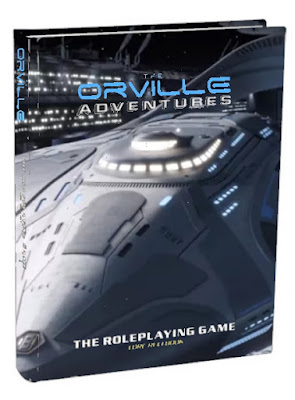 I'm starting to turn around on the new Star Trek Adventures RPG, and think it's a perfect fit for the type of stories being told on the Orville so far. Basically, interesting, exciting, quickly paced, but not as complex, or involved on the average as classic Star Trek. I am really looking forward to seeing where this goes, and whether or not I can get any of my friends to take the trip with me. 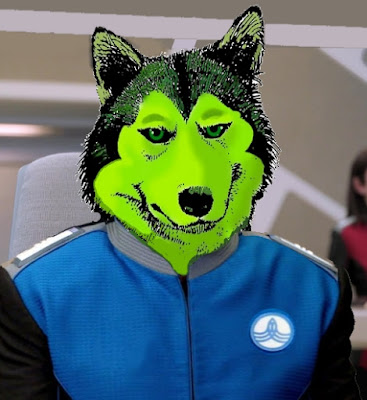 I'll update you guys as I go, but I already have a custom character sheet, and ship record ship ready to go. More info as it becomes available (and as more episodes of the series come out).

Until next time, Engage Quantum Drive!