The latest film in the Star Wars saga and franchise has been released and as one might expect, I now have a serious case of Star Wars RPGing on the brain.

A funny thing...the very first Star Wars film, later designated Episode IV: A New Hope, came out a scant four months before I first played an RPG and a good ten years before West End Games would put out the first official game.

I absolutely adored that first film. I took it in, absorbed its universe into my imagination, and saw it as a fantastically entertaining work of movie magic. It inspired me and deepened my love of movies, outer space, and storytelling.

Every film since has been viewed through the lens of "What does this have that I can use in my games?" Essentially, the original Star Wars was my introduction, and the rest are enjoyable research.

This newest entry is no exception.

First, I want to say that I very much enjoyed the film. After the original trilogy, Solo: A Star Wars Story may be my favorite film in the franchise.  It wasn't a perfect movie by any means but it was very good Star Wars.

From this point on I am going to issue a SPOILER WARNING. I don't intend on revealing any big secrets, but just in case you have been warned. 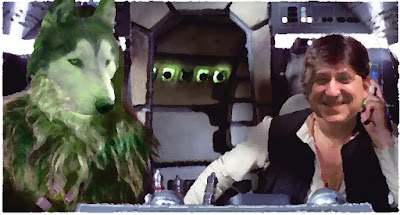 "You never heard of the Barking Alien Blog?
It's the blog that gave a SPOILER WARNING in less than 12 parsecs."

Always in motion is the future

One of the things that makes for a good Star Wars adventure, and indeed a whole campaign, is forward momentum.

Things - people, starships, events - should always be in motion. Like any good road trip, you need to stop now and again at some truck stop or scenic site to catch your breath and reflect on the journey, but never for too long.

Once you're ready, and there is always some underlying feeling of urgency even on a site-seeing trip, you're back on the road. You have a goal, a final destination, but the twists and turns of the trip itself are half the fun.

Solo does a good job of this. Again, perhaps not perfectly executed, but well enough to get the characters, and the audience, moving along toward an exciting climax - the ultimate goal of any action/adventure story.


Your first step into a larger world


Another element key to Star Wars films and gaming is to utilize the familiar, yet be sure to introduce the new.

Players and their PCs should see familiar species, starships, droids, and maybe even worlds (use these sparingly - see below), while at the same time encountering new creatures, devices, and planets right along side them. 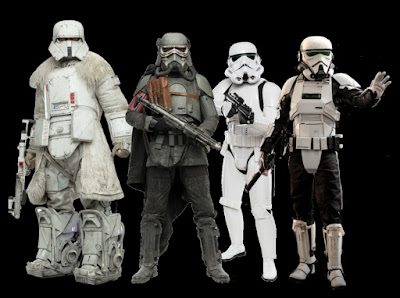 
When you run Star Wars [or any IP based game for that matter] make sure you include well known elements to reward your group for choosing to play Star Wars in the first place. I mean, why choose to place your game in the Star Wars universe if your not going to use Astromechs, TIE Fighters, Rodians, or other favorite bits?

That said, if they only ever see things they already know, they're going to get bored with the setting. Maintain a balance of old and new and you will always have a reason to return to the same universe.


Make the jump to Hyperspace!

Related to both of the aforementioned factors is the notion that, unless you are running a particular type of game, my advice and preference is to travel to different planets fairly often. 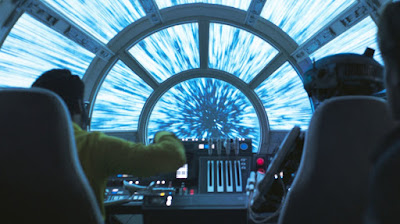 How often? Hard to say. My recommendation is to play it by ear but for me, I don't usually like to spend more than one Star Wars session on the same planet. Yes, you read that right. No more than a single session.

If your games run short - say, 3-5 hours - sure, you can spend a couple of sessions on one world. For my in-person Star Wars games, which usually last around 8 hours, I try to either start the game on a world or with the PCs arriving at the world and by the end of the session they should be leaving it and heading somewhere else.

But I want to explore the planet and survey it's terrain and ecology.

But I want to learn about the native species, their art, and culture.

This is Star Wars. You want to do a thing, get in trouble with the Empire for doing that thing, then battle your way past the Imperials on your way to do another thing on another world.

Solo does this...well...it almost over does it. In the span of the movie's 135 minutes run time, the characters and events take place across no less than five planets. Maybe more. I am not actually certain. There is a scene or two that seem to take place on the same world but may be different world's and vice versa. Also, the final scenes - which are relatively brief - take place on a planet not previously seen in the film so I guess it's really six.


I got the chance to run a Star Wars one-shot this past Sunday and I tried my hardest to GM it based on the principles I've mentioned here. It went over really well and the players are hoping to turn it into a campaign.

In an upcoming post (perhaps several) I will detail the first session and dive more thoroughly into how the above concepts were implemented and why they worked.

Until then, I have a good feeling about this,