It's been a very hectic month for me and as such a very light one as far as posting goes.

I did want to finish off May with a little update on Champions: REVIVAL.

We've run two sessions so far and we definitely have a hit on our hands.

Before I do session write-ups (likely in the next week or so), I figured I would give you all the established conceits of the setting and the Player Characters involved:


Six months ago prior to the first session of our campaign (i.e. Issue #1):

An alien being calling himself The Examiner arrived on Earth with numerous, space-faring, mountain sized machines which scattered themselves around the globe, floating a couple of miles above the surface.

He performed what he called 'The Final Analysis' and deemed 'The Grand Experiment' a failure (whatever that means). The result was that he was going to use his machines to destroy the Earth. The superheroes of the world, organized by Project: UNITY, went to stop him and his android minions. Three major supervillains also tried to help - Holocaust, Kineto, and Paradigm Shift.

Holocaust and Paradigm Shift had their own agendas and ended up attacking each other. Wounded, they escaped and disappeared. 😢

In the end, Kineto sacrificed himself to destroy the Examiner and his devices after the other heroes had disabled Examiner's defenses.

Three weeks after the Final Analysis Event, Omni, arguably the world's most popular and powerful hero (top three at least 😉) resigned from UNITY to take care of matters of a personal nature. He disappeared after that and has not been seen since. 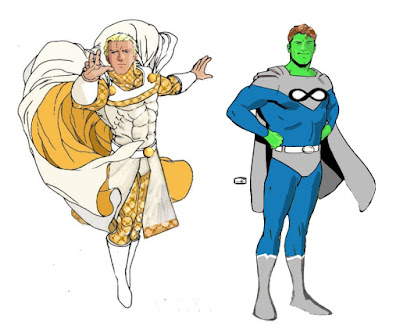 
This is all the PCs know at the start of the game. I told them that if they have contacts in the Supers Community, Government, or Law Enforcement they might know more. Likewise, if any of them have Knowledge or other appropriate skills they might be able to learn additional information. So far they've been too focused on what they're up against to investigate the backstory further.

Hypnagogia is defined as the transitional state between being awake and being asleep.

We all agreed that Esmeralda came up with the perfect codename for this most mysterious of superheroines. With the psionic power to manipulate light and the way the mind perceives it, Hypnagogia is a mistress of illusion, with her 'psychic holograms' visible to cameras and digital film as well the Human eye.

She possesses a number of other powers as well, including a powerful blinding flash, the ability to read and manipulate minds of semi-conscious individuals, and turning herself invisible. In actuality, she is permanently invisible due to a subconscious panic attack she had when her powers first manifested. She must concentrate to become visible, and often uses her illusion power to 'show herself' (meaning none of the other PCs or NPCs know what she really looks like as of yet).

She is a detective, battling mostly street level villains and gangs before joining up with the rest of the group. Now involved in the dark doings of true supervillains, Hynagogia is trying hard to expand her understanding and use of her abilities to better combat her opponents.

Who this young woman really is and how her powers first came to her is unknown at this time. She may not even know those answers herself.

An orphan whose parents were involved in some government project that got them killed, the boy who would grow up to be Matrix lived on the streets of New York City using his higher than normal intelligence and mechanical aptitude to get by. He often fixed devices for people or would repair discarded items and sell them to get food and other necessities.

Eventually, the kid was approached by some gang members who had gotten a hold of a high-tech weapon and were willing to pay him to fix it. He did, and before long he was known as the go-to guy for super-science repairs and modifications on the fly. This went on for some years and he eventually did work for some big name super-crooks.

Unfortunately for him, Matrix was eventually caught and sent to jail. His high intelligence enabled him to survive and even help some fellow inmates to navigate the often dangerous prison system. One particular fellow became a close friend and when that fellow was paroled they stayed in touch.

One day a man arrived and met with Matrix to offer him a special deal - join a top secret government research project to expand Matrix's intellect to it's full potential and Matrix would receive a complete pardon. Matrix agreed. Things did not go as expected however. The fellow was an agent for a black ops organization that experimented on Matrix and a number of other young people. Eventually the experiments on Matrix unlocked a latent Intrinsic Field Power that caused a massive explosion at the hidden facility where he was being held. He escaped in the confusion, learning all the other subjects had already been killed by the experiments days before.

Now on the outside with a superpower could barely manifest again, let alone control, Matrix decided to turn his life around. He built equipment to help him harness and utilize his Intrinsic Field powers, and created the costumed hero identity of The Matrix to make up for the wrong doings of his youth.

Matrix generates a field of energy that can only be fully utilized while wearing various devices of his own invention - gauntlets, boots, a helmet, a partial battle suits, etc. With the gear he can shoot blasts of different types, fly, use a variety of super-senses, etc. Without his equipment, he can only manifest a small portion of his power and it is extremely difficult for him to control the results.

A college professor specializing in Ancient History, Mythology, and Folklore, Pantheon discovered he possessed the rare gift [in this setting] of being able to utilize magic. On one of his many travels abroad, he learned that through long forgotten rituals he could communicate with the deities of old and channel aspects of them through himself to become their avatar.

The deities of this particular Superhero universe have yet to manifest in physical form on the mortal plane. While God and Goddess powered heroes and villains exist, there are absolutely no such mythological entities working the Earth. To put it another was, you might run into a Captain Marvel/SHAZAM type character or Wonder Woman, but there is no Thor or Loki.

The reason for this is currently a mystery, one Pantheon is curious to learn the answer to. In the meantime he uses his ability to summon divine aspects to fight evil magical entites, demons, and the Earth minions of evil gods.

At present we know he can become the avatar of Isis, the Egyptian Goddess of Magic (various Spells and Mystic Abilities), Maui, Hawaiian Demi-God (Shapeshifting, Super Strength, and a Magic Fishing Hook) and at least two others.

Pantheon has made a number of enemies during his short career, including the marauding mage who calls himself The Thaumaturge and his own former assistant who possesses the same gifts but tend to deal with darker gods.


Too Fast (played by Marcus)

Not too much is known about this character's background either but he is definitely the perfect merger of classic and modern hero. While he is here to give his 110% to fighting evil criminals and saving lives, he also wants to make sure you caught that take down of the villains on your iPhone so he can upload it to his youtube channel.

He is a little like Impulse/Kid Flash crossed with Booster Gold.

His powers are particularly interesting. A Super Speedster for sure, Too Fast can also manipulate speed, adding it to or taking it away from objects and people. He often serves as a team support member by increasing the velocity of Warfare's running tackle or subtracting it from baddies as they try to escape.

Too Fast's grandfather is a retired PRIMUS Agent (PRIMUS being a SHIELD-like organization that tends to look down on Supers in this setting). While relationship between PRIMUS and the Supers of the USA has improved here and there, it isn't all hunky dory. Grandpa is a source of info and helps the team navigate some of the red tape of dealing with PRIMUS, but he is also an older man out of his prime. It's like having Nick Fury and Aunt May combined!

By far the strangest character is Warfare, a four armed, alien warrior from a distant star who has come to our world to battle 'the greatest challengers and challenges the galaxy has ever known!'

Before coming to Earth, Warfare was a warrior/guardian on a planet that experienced centuries of global conflict. Sworn to defend his people from aliens, mad warlords, and anything else, Warfare was left without purpose when the wars finally came to an end. A new, world-wide government was established and peace and prosperity reigned supreme. Sadly, there is no place in a Utopia for one such as Warfare and so he left the planet for another world in need of his talents.

As Earth was noted as a place constantly in danger of being taken over, destroyed, or otherwise subject to danger and villainy, Warfare headed there and has now joined with others to protect the people of his adoptive world.

Warfare is seven feet tall, lightly scaled, pale green [with a darker, more scaly back], and possesses four arms. He strongly resembles Goro from Mortal Combat, though leaner and lizard-ish.

In addition to great strength, armored skin, and martial prowess, Warfare wears the ancient Gauntlets of Chaos (really bracers). When Warefare takes enough damage he can utilize the damage to increase his physical abilities or duplicate himself, summoning a temporary clone. Unfortunately, absorbing a lot of damage can set off his Disadvantage of Berserker Rage. The Gems in the Gauntlets of Chaos want to promote rage, battle, and mayhem!


OK, that's the basics and all for now.

A lot on my mind. Hopefully I will have a little more time this coming month to explore some of it.


*Illustration of Omni based on a Superman illustration by Eric 'Doc' Shaner.