As with all my campaigns, an early, primary concern for me as Gamemaster is to determine who the PCs will be and what their role will be in the campaign.

I asked myself, "What will players and their characters do in an Incredibles campaign?"

Concepts to consider when developing the player characters would be:

When did your Super develop their powers?

Perhaps it was very recently. Maybe you were secretly doing 'Hero Work' for the past month, a few months, or maybe a year or so.

What if they developed a long while ago. Were you one of the Supers from back in the good ol' days, forced into retirement when Superheroes were banned? Are you just now making a comeback?

What about playing a child of one of the previous Supers like Dash, Violet, and Jack-Jack?

One of the Supers that intrigued me and got me thinking about character variety in Incredibles 2 was Reflux, a senior citizen with the power to breathe (or more accurately vomit) lava. 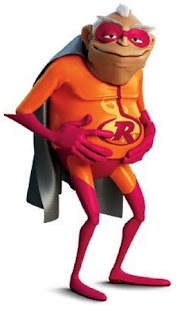 As Reflux doesn't appear in flashbacks, nor in the National Supers Agency Files from the DVD/Bluray added features, it is unlikely he was a major hero of the old days. He is clearly an older gentlemen, which could mean he did have a low profile career as a Super in the past but it seems just as likely he simply gained his powers later in life.

He has a go-to line to put people at ease when he goes to help them. This implies he's been actively doing hero work, but was that in the past or recently in violation of the anti-Supers legislation.

I absolutely love the idea of a retired person gaining superpowers in their old age and wanting to go out and save the day. Unfortunately, they are hindered by laws preventing them from doing just that. With nothing to lose and no regrets, kindly, old Mr. Burns from down the street periodically fights crime and rescues people because dog-gone-it, it's the right thing to do. It's time to show the world that the elderly still have a lot to contribute to society!


"One of us is going to have to get a job."
Helen Parr/Elastigirl, Incredibles 2

What is your Super's secret identity?

Really think about this character's life before being a Super and after having become one.

Do they have a family, kids, and a mortgage? A Mom-and-Pop business? Are they desk jockies in the soul crushing, living hell slog that is the 9-to-5 corporate world? Maybe they're a college student with tons of debt going for an highly useful fine arts degree?

Professional Supers of the kind implied in the first film's past are not yet a thing.

Secret identities in this game will be part of the plot in a way that rarely shows up in other Supers RPGs these days. While I have no intention of playing out board meetings or PTA bake sales, they are definitely factors they will complicate the PCs lives as Superheroes.


"I was approached by this tycoon. He wan't to talk...about hero stuff"
Lucius Best/Frozone, Incredibles 2 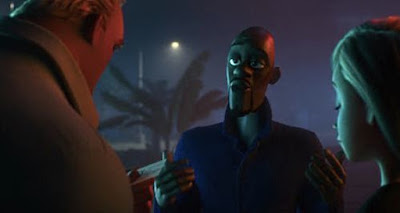 One concept that struck me as especially interesting [but which must be handled carefully] is the idea that in light of legalized Superhero activity, former Supers (and perhaps even new ones) periodically take secret work from wealthy entrepreneurs.

After Supers are legalized again, one would assume the US government would re-activate the National Supers Agency. At the same time, before the renewed NSA gets its act together, it's possible that rich individuals or companies might sponsor new Super teams.

Would the Super PCs be OK with this? Would they wait for the NSA, a group they can trust, or would they accept an offer from a Winston Deavor type fellow?


"Combustion imminent? What does that mean?"
Bob Parr/Mr. Incredible, Incredibles 2

I may go into this in more depth in a later post, but the last point I want to make about character design is giving thought to what powers your character has.

It seems fairly clear from the first film, and would logically carry into the second, that most Supers have only a handful of superpowers. Dash has Super Speed, Elasticgirl Stretching, and Frozone Cold/Ice Generation. Mr. Incredible has Super Strength and Toughness, and Violet has both Force Fields and Invisibility.

These powers also seem to be extensions of their personalities.

Dash is a bit hyper and impatient, Elastigirl flexible, Mr. Incredible direct and straightforward, while Violet is private and insecure (though her personality changes and develops along with her story arc, leading (if you notice) to less invisibility and more force field use.

Figure out who your character is first and what they are going to be like as people before choosing your power. If possible, have the PCs personality and powers reflect each other. Stick to no more than two or three powers, unless the character has a number of minor, lesser powers such as the ill-fated Stratogale, who could fly at sub-sonic speed, possessed superhuman strength, and the ability to communicate with birds. Still and all, that's only really three.

I am considering a system by which players would either roll 1D6 to determine how many powers their Super had, or starting them with 10 'levels' of power which can be broken up into different abilities.

...or something along those lines. It remains a work in progress.

"Come back darling. I enjoy our little chats."

Stephen 'Steve' J. Ditko, American comic book artist and co-creator of Spiderman, Dr. Strange, The Question, and the Creeper among other characters, passed away on June 29, 2018 at the age of 90.

Ditko's unique artistic style and boundless creativity earned him numerous awards and honors over the years.

Departed yet immortal through his various creations, Steve Ditko will missed.