I'd like to discuss a character flaw of mine. It's one I've found quite beneficial over the years. 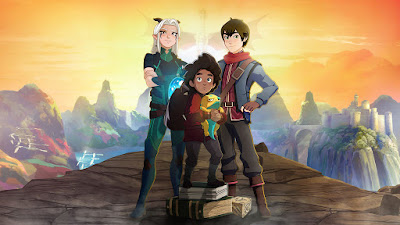 I am often inspired to run games not because I have been exposed to some great example of the subject or genre, but a recent encounter with it that was thoroughly awful.

The Star Wars Prequels and The Last Jedi made me want to run Star Wars sooo badly. After seeing the first J. J. Abrams Star Trek film (and I use the term loosely) and Discovery (Blech!) I just knew I had to run 'Trek.

Unfortunately, the same thing happens when I am exposed to a bad game. If someone runs a poor Sentai game, I become obsessed with running a Sentai game of my own. (No reason I picked that particular genre. Ahem. None at all).

I can't help it. Seeing something done poorly that I feel I could do better just plants a seed in me that is warmed by the light of my burning hatred for it, watered by my tears of sorrow over what could have been, and nurtured to fruition by my undying disdain for poorly executed ideas.

The thing is...in the case of something like a bad Star Wars movie or a lame actual play podcast, no big whoop. I get inspired, I run a good session with my friends, I get it out of my system...no harm, no foul. No one gets hurt and my friends and I have a great time.

On the other hand, if my buddy just ran a right rank game of Mekton and now I want to run Mekton, it's hard to avoid looking like a turd-waffle who's trying to outdo him.

The truth of the matter is...and even I know this sounds like bantha-poodoo...I am not trying to upstage the other GM. I'm not. I am trying to show the subject some love where I feel like it was recently shown a disservice.

At the very least I want to try to take a different approach, to find out if it was the other GM, the game (subject or system), or if maybe I can't do any better than they did.

Yet I am aware I am potentially making someone else feel bad by doing this and it kills me. To that end, to that truth, I often don't run my idea with the same group that ran and played the session I didn't like. I am not looking to show anyone up. Again, that is absolutely not the point. I just get frustrated when I think something that could easily be cool just isn't.

Don't think less of me for...eh...go ahead and think what you want. I know it's a donkey's rear-end thing to do but not only do I try to make sure it doesn't hurt anyone's feelings, I can't help myself. I gotta be me. 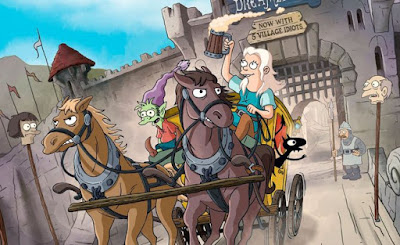 I definitely don't get jazzed by good Medieval Fantasy. As I have noted many times I am not a big fan of it. Not in the way it's usually presented anyway. I rarely want to run Dungeons and Dragons and it's nieces, nephews, third-cousins, and endless derivatives. My girlfriend has gotten me to finally watch Games of Thrones, which is very well done by the way, yet it doesn't make me want to DM a game of D&D at all.

I recently watched both Disenchantment and The Dragon Prince, two new animated series released on Netflix.

I liked Disenchantment, though I was surprised it wasn't as funny as The Simpsons or Futurama considering its DNA. I also thought that the twist (no spoilers) was cool but wondered if those who follow Fantasy literature saw it coming more easily then I. It seemed at once clever and nothing ground-breaking.

And speaking of nothing ground-breaking...

The Dragon Prince was tepidly excellent. Overwhelmingly OK. It sets the bar of mediocre quite high. I enjoyed it for the most part but also felt that it was a bunch of empty calories. It's own pedigree - Avatar, The Last Airbender and The Legend of Korra - well, it isn't those.

I also ended up watching and listening to some D&D actual play podcasts, some great animated youtube shows on gaming ( do yourself a favor and check out The Animated Spellbook. Thank me later), and finally, listened to a friend complain about his recent attempt to run D&D 5E.

Crap. I want to run Fantasy. I want this non-Fantasy fan to show'em how it's done.

Labels: Medieval Fantasy, Personal, RPG, What Other GMs Do Wrong