Out of This World

Great Geks of the Galaxy! It's already the 15th of September!

So much for being inspired to blog more.

No, that's not right, I am inspired to blog. I've just let the time get away from me.

While Indie Adam considers what kind of deep meaning, hippie-trippy RPG campaign will work best in the coming year, Mainstream Adam* is thinking about Space Opera Science Fiction once more. 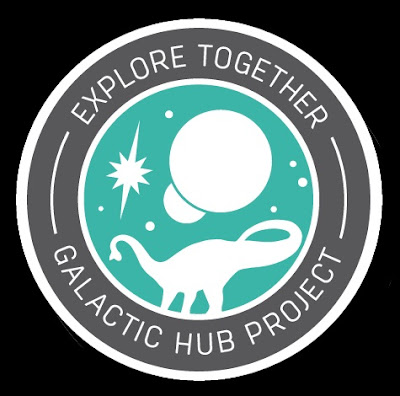 I've talked about it before but for those of you who may not be familiar with it, No Man's Sky is a Space Opera Science Fiction, Action-Adventure computer and video game created by the independent studio Hello Games.

In the game you are an explorer traveling through a procedurally generated open universe of literally hundreds of millions of planets. The game can be played by different people in different ways by choosing to focus on one or more of the games key themes:

You can dedicate your time to battling space pirates, kill monstrous creatures, or destroy the robotic sentinels that appear on worlds throughout No Man's Sky's galaxies (yes, plural). Mine, craft, buy, sell, and trade to upgrade your personal and shipboard weapons, defenses, speed, etc.

Of the four intelligent alien species in the game, the Vy'Keen are the warrior culture who most value fighting as a means of getting what they want.

You can earn Units and Nanite Clusters (two of the game universe's three currencies) by discovering new star systems, new worlds, scanning the creatures and plants that live on them as well as other elements. In addition, there are secrets to the various species and the nature of the Sentinels and the mysterious Atlas that can only be found by looking around and interacting with the artifacts and ruins you find scattered across the cosmos.

The Korvax, an intelligent species of cybernetic, or perhaps robotic lifeforms are the pioneers of Science and Discover in the game.

Nothing can be accomplished without money and resources. The game enables you to mine for minerals, plant material, and even chemicals and gases. These are used to keep you alive, powering your exosuit, multi-tool, and starship. They can also be used to build devices, bases, and vehicles to aid in the other aforementioned aspects of the game.

The diminutive Gek, a reptilian alien species and my favorite of the four starfaring sentients are all about trade.

The universe of No Man's Sky is dangerous. Toxic, freezing, and scorching atmospheres, deadly poison spores, quick striking pirate starfighters, and other hazards lurk across the stars. No matter how else you play you must also survive to Fight, Explore, and Trade another day.

The fourth species, the Travellers, are the ultimate survivors, or at least their memories and works will live on for eons...

No Man's Sky Next (see below) adds a fifth intelligent lifeform, The Anomaly, who appear for all intents and purposes to be Humans, but that has not been officially confirmed. Little information about them is available at this time. 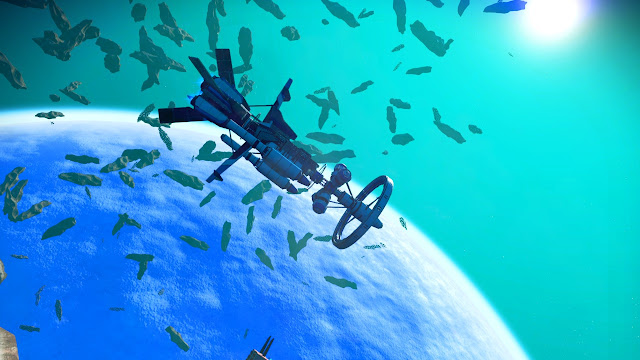 My Science Frigate, the GDV-101s Inquiring Mind
coming through an asteroid field and into orbit around
Yuki-Onna, in the Ame-No-Koyane Antares System


The game has had a few updates since its original release two years ago, with the latest a major content release known as No Man's Sky Next. I played the game when it first came out and again somewhere around the second update. Now, with Next, I have returned once again and I am loving it like never before.

I am also getting very inspired. I want to get back to Science Fiction.

Not just any type of Science Fiction but Space Opera style SF similar to that of No Man's Sky. The adventures of brave but lonely space explorers roaming the cosmos in search of wealth, glory, and knowledge. The next planet you land on may hold a score big enough to retire on or the answer to questions about the very nature of the universe.

Now I just need a game that can handle that. Easy peasy, right?

Certainly I could do it with any number of games, with Traveller and Star Frontiers coming to mind immediately. When playing No Man's Sky I often find myself thinking about my old games of Star Frontiers. The look of things, the types of missions you take and 'quests' you get all feel very Star Frontiers to me. If Star Frontiers had better sentient species it would be No Man's Sky.

It just so happens however that there is a game on Kickstarter right now (only a few days left to go!) called Free Spacer that seems right on the money (unless of course your advanced society no longer uses it).

What makes Free Spacer so well suited for a No Man's Sky type setting?

A big part of the No Man's Sky is the resource management and crafting aspects that work so well in computer and video games but rarely show up in American tabletop RPGs.

Free Spacer makes this a key part of the game play. There is a very interesting (and more than slightly complex) relationship between the in-game management of the PC crew, their starship, the items, materials, and information they buy, sell, and exchange, and the rule mechanics for bonuses to skills and various actions.

I love a little resource management in my Science Fiction. It is something I found overwhelming in Traveller if you play it by the book but of course I never did that. Instead I simplified things and created a smoother, quicker, and much easier way of handling funds, resources, and the like that my players really get a kick out of.

Other aspects of Free Spacer that sound intriguing include the options for 'world-building' the universe, which involves player and the Gamemaster collaboration, the way you can reward good Role Playing to power-up your character and the ship, and a host of other nifty ideas.

Here's a First Look at Free Spacer by Adam Koebel, co-designer of Dungeon World. Check it out but be ready to sit through some very youtube-content-poster moments. Still and all, quite informative and definitely made me want to see more of Free Spacer.

I am a little under the weather, so I am going to call it a day here on Space Station Samulayo Sigma. The Kickstarter is linked further up in the post. 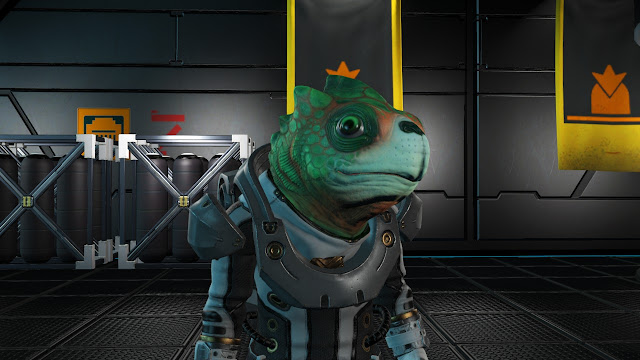