Last night I got to play a session of my friend Justin's Mecha Combat RPG Beamswords and Bazookas, which has been successfully backed on Kickstarter. Congratulations Justin!

You may notice that I describe it above as a Mecha Combat RPG. That's because that is what it is. That wasn't exactly what I was expecting and in truth, not exactly what I am looking for in a Giant Robot game. 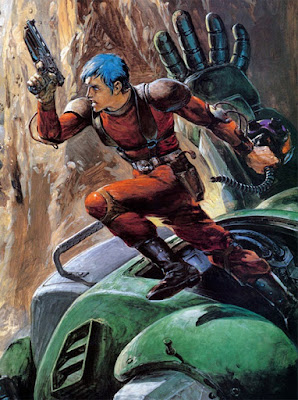 
I want to make it clear first and foremost, this is a good game. A Really Good Game! You should definitely get it if you want a medium to low crunch, tactical, tabletop Mecha miniatures game with RPG elements. It's like, if Battletech actually wanted it's robots to be cool robots and not just boring tanks with legs that are less effective than conventional military hardware.

There are a good number of options for Characters and Mechs alike, with skills, weapons and special abilities - called Traits - that can give your PC and robot combat advantages in various situations. Combat is generally fast and the mathematical calculations are kept small and not at all cumbersome. There are some particulars to the rules regarding hit and defense that are good to memorize and the game has a bit of resource management when it comes to PC Stress and Mecha Energy but it's all pretty easy to handle.

Now, the big question...would I play it again? Sure. It would be fun to revisit for another one-shot here and there.

Would I want to play or run a campaign of it? No. I am afraid not. 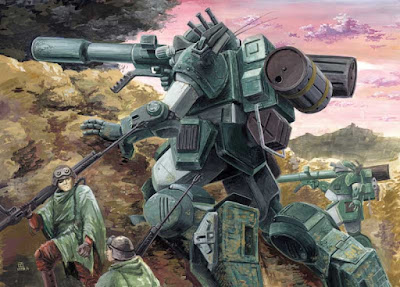 
Beamswords & Bazookas is fun but it is not the kind of game I am looking for. It isn't an Anime game. There aren't any elements in it that really speak to the genre of Japanese Anime and Manga Mecha stories except that it features some of the same trappings, most notably Mecha.

B&B is a War Game with RPG elements as opposed to Mekton which is a Role Playing Game with a Mecha Construction and Combat System. As it is, I feel that each edition of Mekton got more and more complex, and tactical-simulation orients and further away from the fun of it's earlier incarnations.

Personally I am looking for something a little less tactical, combat focused. Something more genre and story driven. If you could switch the percentages on this game, the Tactical Combat to RPG ratio as it were, it would probably be more my style.

I am still 100% pleased with the game, with the session we had, and with the fact that I backed it. I am certain that most gamers will get a lot of fun out it. There are RPG elements in it. I did have a Player Character I kind of liked. I just don't think the overall purpose and focus of the game clicked with my sensibilities. Nothing wrong with that.

In conclusion, you should definitely give it a look. It is definitely a game worth your time and money.

I remain in something of a Mecha mood...Hmmm. 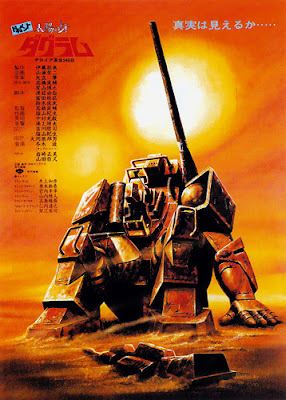 Dougram
Fang of the Sun