The Art and Making of The Smiling Bantha Gang! 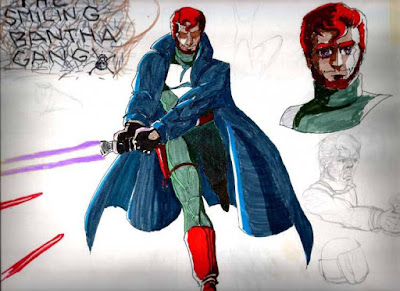 
One of the things that really stands out about The Smiling Bantha Gang campaign now that I look back on it from a point some 30 years in its future is how much material we made up that would later be filled in by Lucasfilm, Disney, the Expanded Universe/Legends, and other official and semi-official sources.

It's also amusing to note how much of what we created matched some of the canon or popped up and became canon later on.

We had Purple Lightsabers, Double-Bladed Lightsabers, Offworld Jawas, a Volcanic Ash Planet, and more details on the Mandalorians and certain alien species, long before they became part of Star Wars common knowledge now made canon by the Prequels, The Mandalorian Disney+ series, and the Clone Wars and Rebels CGI animated shows.

It become a running joke over the years that one of us (the players in the group) was a spy for Lucasfilm or that our gaming locations were bugged by them so they could steal our best ideas. LOL

My group did have a Jedi with a purple lightsaber long before Samuel L. Jackson's character Mace Windu in the Prequel Trilogy. While there was a story behind it, it really came about because the player's favorite color was purple. We retro-actively adjusted the story to imply Ximet's Uncle trained under Windu.

If you look at the villains of our game. Gildergath the Great (aka, The Great Gildergath and not to be confused with his son, Gildergath The Lesser) was inspired by an unused concept art design for Jabba the Hutt. That same design was used in Star Wars Rebels for Azmorigan, the Jablogian criminal who appeared in several episodes throughout the series.

Fleeto Woff, the Mandaloria Bounty Hunter who you might notice closely resembles Boba Fett's color scheme in his first appearance, the much maligned 'Star Wars Holiday Special' has a rather humorous origin. After seeing the Holiday Special my friend Joe and I fell in love with the character of Boba Fett but could not remember his name. At one point I said, 'Was it something like Baba Fetts?", to which Joe replied, "That sounds like a Star Wars universe breakfast cereal. Kids, did you eat your Baba Fetts today?" Complete with Blue Milk no doubt.

We eventually settled on believing it might has been Fleeto Woff. When we saw The Empire Strikes Back and other material confirming Boba Fett's correct name, Fleeto Woff became an original character used often in Star Wars RPG campaigns.

Shuuth, the Ubese Bounter Hunter, was played by my dear departed friend Peter Hernandez III. He wanted something Humanoid but not too Humanoid and originally considered playing a Twi'lek. Then he saw concept art of Boushh and said, "Wait...who are these guys when they're not Princess Leia in disguise?"

Looong before The Mandalorian, I had Jawas, with gray cloaks, red eyes, and living on a planet other than Tatooine. When I saw the second episode of that series I literally shouted and laughed out loud. Plus, the planet I had them on, my original world of Gardine, is a gray, ash-covered, volcanic planet virtually identical to the planet Nevarro, which also appears in The Mandalorian.

I apologize to whomever played Mees. I remember him very clearly and his unusual 'play mechanics' which I will discuss below. It's very frustrating that I can't remember who the player was. I actually called out to the old players and none of them could recall who played him either. So strange.

Mees was played in a non-traditional way, especially when you consider this was back in 1990. The basic Template of Jawa Mechanic was given less than the standard 18 Dice to Attributes and 7 Dice to Skills. I forget exactly but it may have been something like 15 and 5 or even less. What Mees' Player did was then create a set of Droid Templates. Initially I believe he had 5: An R2 Unit Astromech (R2-D0D), a Protocol Droid (JD-3PO), a Medical Droid (30-1B), a GHK Power Droid (GONK-90), and one other. He would than allocate a number of Dice to these that made each one less effective than a normal PC but SUPER effective at a narrow set of abilities. 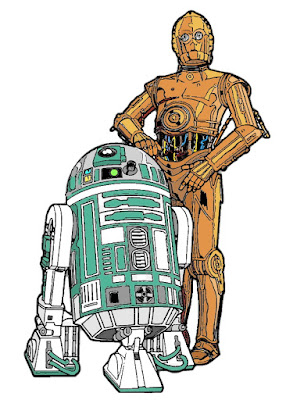 This was his 'Droid Pool' and he could field Mees himself plus two Droids, or three Droids at a time, with the Player playing the role of the Droids in either case. The other droids were assumed to be back at the ship powering up or undergoing repairs or whathaveyou. During the course of the campaign, Mees would pick up other droids, usually ones we had damaged or found wrecked, and add them to the Pool but he would still only play up to three at a time. I wasn't ultra strict on this, as I would often play JD-3PO as an NPC, while the Player played Mees and two other droids.

A lot of work went into this game in a relatively short amount of time. In a period where the only source of expanded information on many aspects of Star Wars could only be found in the RPG by West End Games, my friends and I developed a huge volume of fan stories, theories, art, and researched reference material to give the game its unique feel as fresh but wholly set within the concepts of Star Wars.

In addition, as you may or may not be able to tell, there was often a tongue-in-cheek, humorous element to The Smiling Bantha Gang campaign, though I would definitely not label it a comedy. That is to say, while some of the character concepts were a bit over the top and some of the dialogue and situations very funny, the entirety of the plot and the approach to the game was quite serious. If anything it could be likened to the later half of The Orville Season 2, wherein there is humorous banter but the show is no longer a comedic take on Star Trek but instead a Science Fiction Dramedy. This was the Star Wars equivalent of that.

The ship is calling The Smiling Bantha, and that in turn is where the gang got it's name, but where did the ship get that name? Well, as it turns out, the Smiling Bantha is an old Sand People/Tusken Raider legend about a Bantha that roams the Dune Sea finding lost travelers and laughing at their misfortune. Supposedly, if you tell the Bantha why you're there and he deems you brave and determined, not foolhardy, he will lead you out of the seemingly endless desert to safety.

Jo Jetto claimed to have seem this Bantha as a young man and it lead him to the wreck of a ship that he repaired, used it to get back to Mos Eisley, and, you guessed it, he named The Smiling Bantha. The actual (?) Smiling Bantha appeared twice during the campaign. Once to Shuuth who thought he was seeing things, and once to Ximet in a dream.

Well that is that for now. Man this was fun. I would like to thank David Concepcion, Nelson Marty, Mike Moss, and the late, great Pete Hernandez III for making this game so memorable and producing so much artwork and ideas for it.

I want to thank all of you out there you took the time to take this stroll down memory lane with me and please, let me know if you liked this and want to see more Campaigns I Have Known again in the future. If there is a particular campaign you'd like me to reminisce about - Hey Adam, do you have a particularly memorable Mekton game you can tell us about? Was there a TOS Era Star Trek Campaign You Have Known that you'd like to share? - please let me know that too.

Until next time, May The Force Be With You and with your dice as well!

Posted by Adam Dickstein at 5:20 PM