The third session of my ongoing Yellow Sun campaign - based on the British Sci-Fi Sitcom Red Dwarf and utilizing the Alien RPG by Free League Publishing - was a lot of fun but definitely not as strong an entry as the first two.

I decided to switch things up after the character-focused adventure 'It's Double or Nothing' by doing one that was more action focused. As with the show the game is based on, sometimes the comedy surrounds, or is surrounded by, serious moments of combat and of course, running for one's life.

Most if not all of the combat on the Red Dwarf series is depicted in the form of clever tricks and goofy mishaps. Either that or it is perpetrated off camera and by characters others than the main stars. Basically, combat and action aren't the focus of Red Dwarf but they are important elements. 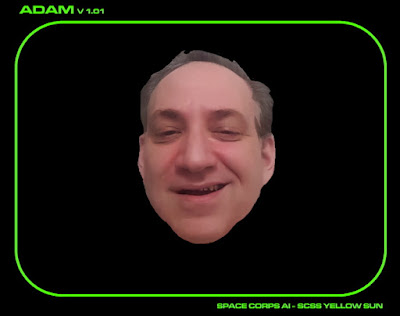 "Mayday, Mayday. This is an SOS Distress Call from the Search and Rescue Vessel Yellow Sun.

A radiation leak has killed the entire crew. The only survivors:

Utilizing my vast intellect, the knowledge in my extensive data banks, and the culmination of the nearly limitless mental resources at my disposal, I have calculated that we are...screwed. We are so screwed."


Our session opens with the Yellow Sun flying through space on its continuing mission to locate the Red Dwarf. It is noted that where the Port Side Laser Cannon should be, there is instead a hole, some additional damage, and a bit of makeshift repair. This is a hold over from the previous session in which Chicken accidentally caused the weapon to overload and explode.

ADAM informs the group that he's detected a JMC Supply Ship called 'Behemoth', a Leviathan Class Vessel. These were Cargo Freighters often used by the Space Corps, JMC, and others to ferry important supplies to other ships and space stations. The ship is not responding to hails and in fact appears to be a derelict. 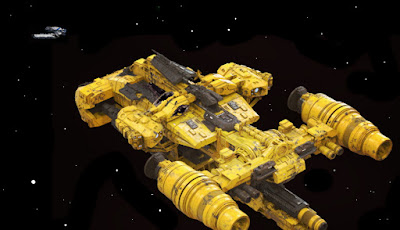 Noting that the Cargo Container section is largely undamaged, the team plans to board to the Behemoth to see what it has. If they're lucky they can find parts to complete repairs on the Port Side Gunnery Deck and maybe even find a replacement Laser Cannon.

The party flies over in a Starguard Rescue Shuttle instead of a Starbug, just in case the damage to the Behemoth is so severe that they don't have a lot of good landing surfaces. Plus the Starguard, though smaller, has a lot of emergency equipment on board like climbing gear, extra oxygen tanks, a medical bed, etc. 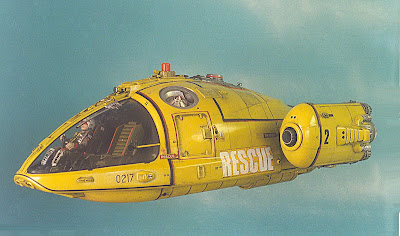 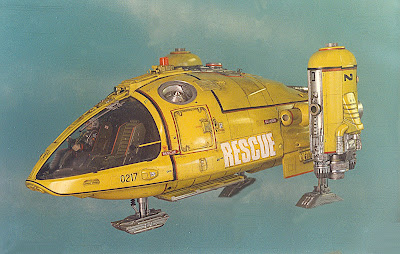 A cross between a Rescue Chopper and an Ambulance.
Seats two in the front and another two behind them,
with room in the rear for two more. Or ARTHUR.

There were no life signs detected about the Behemoth, though there were flickering mechanical signs indicating some sort of robot might still be active about the vessel. Parts of the Cargo Container section were shielded from sensors.

The ship was badly damaged and in fact, Wilder and ARTHUR estimated it may have been attacked. If so there could be very little left aboard. Nonetheless, the PCs ventured forward, with Chicken piloting the Starguard 2. 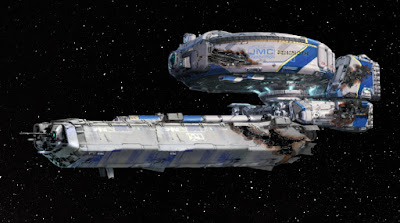 As the Starguard approaches the Behemoth, they see quite a bit of debris floating about the space surrounding the ship. Among the detritus are what appear to be dead bodies, both intact and in pieces. On closer inspection the PCs realize they are viewing the bodies of synthetic people - unusually realistic looking, pseudo-biological androids.

Chicken remains an excellent pilot and a terrible lander, bouncing the Starguard off the side of the one partially closed Hangar Bay doors and spinning across the deck. The little shuttle eventually stops hard after ricocheting off the back wall, sparking and smoking. Chicken panics, as is her default, and quickly opens the door of the shuttle to exit the craft. With the Hangar Doors half open there is no atmosphere in room and the gravity is off as well. As in the region outside the ship, android bodies and body parts float here and there throughout the Hangar.

FHOOSH! She leaves the Starguard accompanied by the air within the tiny ship as explosion decompression hurls her across the bay. Webb, having been turned head over heels by the landing (such as it was) is nearly thrown out as well, managing to hold the edges of the doorway for dear life before ARTHUR pulls him in and shuts the hatch. Grabbing a spare helmet, ARTHUR leaves the shuttle (after Webb secures himself and attaches his own helmet) and floats through the gravity free Hangar after Chicken.

Chicken temporarily saves herself by getting into a sealed cargo container. ARTHUR finds her, gives her the helmet, and then the two of them make it to the floor of the Hangar once again. Everyone uses magnetized boots or feet to walk to the doors that lead into the rest of the ship. Hologram Wilder has been at a great advantage during this entire sequence, being unaffected by the lack of air and gravity.

Entering the rest of the ship and closing the door behind them they begin to encounter more gravity and air as they get further on. Auxiliary Power Batteries and Back-Up Generators, though weak, are still functioning in some sections of the Supply Ship. Lights are low and often tinted red, with some completely dead in many areas. Continuing forward the PCs see that the dismembered synthetics were likely soldiers, each having varying degrees of armor and weaponry on what's left of their person. In addition, other damaged and destroyed robots are found, including ones identical to ARTHUR and a dedicated Cargo Lifting variant of ARTHUR's model that he himself is unfamiliar with. None of them are active. 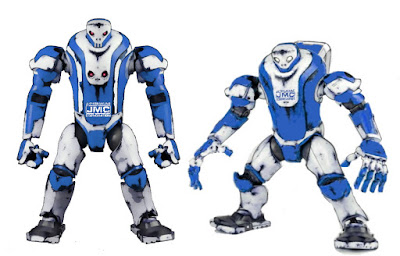 
Soon the team reaches a curving corridor and both Webb and Chicken notice something moving at the end of the hallway. The two of them inform the others who saw nothing. As they try to get a better look without getting too close, ARTHUR attempts to scan with his robotic eyes and still comes up empty handed. Just then, Chicken and Webb notice something leaping up onto the wall, bounding off, and suddenly it attacks ARTHUR. It manages to score his armored form but fails to cause any real damage.

ARTHUR retaliates with his Arm-Mounted Lasers but it isn't a solid hit. The entity, like a shadow of some human-animal hybrid, then lunges at Lt. Wilder and somehow hits his Light-Bee (the object that generates his hologram), sending it bouncing off the wall and clattering to the ground. Wilder's image flickers and then goes off for a moment, rapidly returning as the Light-Bee floats into the air once more.

Chicken at this point has started running away back towards the Hangar Bay. Webb is of course hot on her heels. Wilder is absolutely stunned. His Light-Bee has never been struck before and indeed it would be extremely difficult to do so. It's like trying to his a floating tin can hidden behind a life-size picture of a person. How did the attacker see it? How did they know he was a Hologram? Was it merely an accident, a lucky shot?

Strangest of all, neither ARTHUR nor Wilder could see their assailant. To their artificial senses, nothing had attacked them. The claw marks sliced into ARTHUR's chest armor confirmed their reality however.

Wilder noticed the organic team members, Chicken and Webb, had already reached the end of the hallway leading back to the Hangar, though they were having difficulty with the manual lever to open the door. As Wilder turns to head towards them, ARTHUR is attacked again, this time taking damage on his shoulder and the side of his head. Thinking fast, he fires a smoke grenade, making it easier to 'see' his opponents by its movements through the cloud of charcoal colored gas.

Wilder thinks back on his training and remembers some emergency security protocols. Clearing his 'mind', he shouts a coded command at ARTHUR. "Go HAM!" ARTHUR's mechanical brain unlocks a dangerous 'Barbarian Rage' mode and he grabs the attacker, grasping his heavy mechanical hands around the entity's leg. He proceeds to swing the being about Hulk vs. Loki-style, slamming it into the near wall and then across to the far wall of the corridor. Oddly, his touch receptors, optic units, and audio receivers still pick up nothing. He can not feel, see, or hear his enemy. This is true for Wilder as well.

Webb is aware of what's going on however, as he can hear the horrible, whiny, almost Human animal screeches of the creature in ARTHUR's grip. It tries to kick him and squirm away but the Security Robots hands are like a vise. ARTHUR slams the thing against the floor for good measure and then backs away as he believe he has rendered it either stunned or completely unconscious.

As the team assembles at the Hangar entry, ARTHUR drops out of Full On Crazy status and uses his great strength to open the doors manually. As the group enters the bay, Webb and Chicken run to their shuttle, while Wilder notices an android floating down the opposite hallway and...waving? Yes! One of the synthetic soldiers is actually still 'alive'. ARTHUR grabs him on Wilder's suggestion that he might have insight into what the heck was going on.

Chicken and Webb enter the shuttle to find out that they can't lift off. The landing gear is jammed under some heavy debris.

As ARTHUR and Wilder run for the small craft with android in tow, a sinister shape reaches the entry way to the Hangar Deck. Webb and Chicken can see it plain as day but to ARTHUR, Wilder, and their companion, who identifies himself as Simulant Cameron, the entity remains absolutely invisible and undetectable. 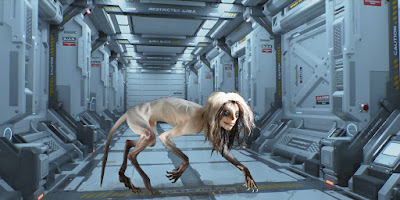 Tune in again soon for Part 2!