The Old Dragoon's Blog posted that someone else (possibly Tardis Captain's Blog of Holding?) had initiated a 31 Days / 31 Characters RPG Challenge for the month of January 2021. 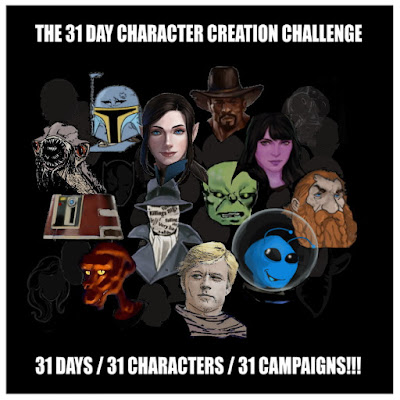 To me this sounds like an excellent way to get the creative juices flowing and start the New Year off with a bang. While is going to create a new character in a new system every day for 31 day (WOW! More power to you sir!), I am going with a different take on things.

Each day in the month of January I will post a different character from one of the many, many campaigns I have run or played in in the past. Some of these characters will be mine, some will be those of my players, and some will be memorable NPCs. I will indicate the Player or NPC nature of the character, list the system, setting, and campaign they were used in and give some background information on them.

This is a perfect excuse to do a blog series I've been thinking about for a very long time, which is to celebrate some of the greatest characters in the greatest games I've been a part of, especially if they haven't gotten the proper love in other posts I've done previously. In a way it's a nice combination of Campaigns I Have Known/Played, Player Profiles, and a special thank you to everyone in my life who have made gaming my favorite pastime bar none.

See you next month. Happy New Year to you and yours from me, mine, my dog Sketch, and of course Barkley. 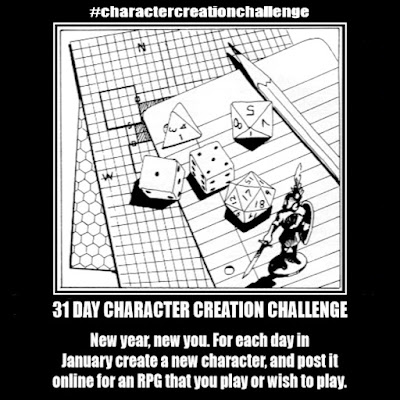 The original 31 Day Character Creation Challenge image
OK, not exactly the original. I altered it slightly.
The real one was kind of bland and off center.
It gave me artistic OCD until I tweaked it.
Posted by Adam Dickstein at 7:35 PM