Before I move on to discussing the various Japanese Tabletop RPGs that cover the Superhero genre (and thereabouts), I thought I'd share some news on an upcoming American Superhero TRPG that has come to my attention... 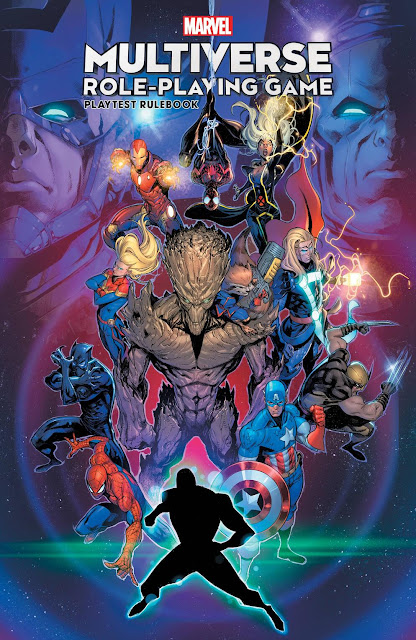 Look at that cover! Wow. It has some awesome stuff on it, as well as some things that make me scratch my head a little.

First, I like the title, Marvel Multiverse. It ties into the upcoming Doctor Strange and The Multiverse of Madness film as well as implying that each campaign you play, that anyone plays, exists somewhere in the infinite dimensions of space and time. Yes! Love it.
If you read the full article, Matt Forbeck and the games' design team have done my kind of reinforcing of the IP and setting. Their new, original rules for the game are referred to as the D616 System, a homage to the main universe of Marvel Comics being Earth-616. The Attribute stats for a character appear to be Might, Agility, Resilience, Vigilance, Ego, and Logic. Yep, MARVEL and honestly I just did that from memory after reading it only once or twice. Clever on their part. I would say even easier to memorize than FASERIP (I can never remember what all of those letter stand for).
Lastly, I love that the character in the forefront of the cover is yours. A silhouette that could be any hero but which intrinsically implies you can be the greatest hero Marvel has ever seen. Brilliant! A long way from Marvel Heroic's lack of built-in Character Creation and a mindset of 'Why wouldn't you want to play as Spiderman?". Maybe because I'm an Tabletop RPG gamer? I want to meet Spiderman. I don't want to BE Spiderman. I want to be someone I created and have them save Spiderman!
Now for some...odd choices on the cover and in the write up of the announcement.
First, who the heck is this supposed to be? 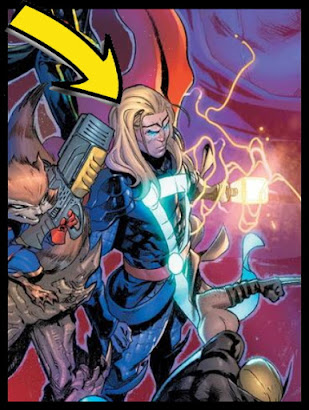 Is that supposed to be Thor? Just when I get done praising the designers for brand identity and marketing they gotta go and do dumb stuff like this. Are the art directors and editors working on this new to comics? Even if Thor looks like this now, by the time the book comes out in a year or so he definitely won't look anything like this. Why not draw him to more closely resemble the iconic image of Thor we'd all recognize. Even better, why not illustrate him so he resembles the MCU Thor. That is what is going to sell your game to fans of 'MARVEL the Entertainment Empire' as opposed to those who like Marvel Comics (smaller group) or gaming (waaay smaller group).
The second thing that bugs me is in the title...Playtest Rulebook. It says the players can get the Playtest Rulebook and effect the shape of things to come as their feedback will be included in the final, complete version of the game due out a year later.
Are you saying...wait...does the Playtest Rulebook cost money? Are we, the fans and consumers, going to need to pay you in order to make your game for you? I know I'm being cynical here but it just sounds like we'd be buying an incomplete game that Marvel is going to complete a year latter using the fans' ideas and then sell then the book again. That may not be what's going on but that's what it sounds like. I could really use some clarification on how this is going to work.
Still and all, I am looking forward to it. I haven't run or played a lot of games set in the Marvel universe, usually preferring my own setting or DC as I was once a huge DC Comics fan. Nowadays however, with the MCU in theaters and on TV, the upcoming What If? animated series and DC doing at terrible job of being DC, I could definitely see myself running another alternate universe Marvel game like I did way back when.
I'll be following the developments of news of this one closely so check back and stay tuned.
Excelsior!
Now back to Japan...
AD
Barking Alien
Posted by Adam Dickstein at 9:55 PM