I am so close to running my first session of our Pokemon: Rise and Fall campaign with my Pokemon AD homebrew rules and I can not tell you how excited I am. Like, truly excited! I
haven't felt this thrilled about a campaign in a long time (or at least it feels that way). 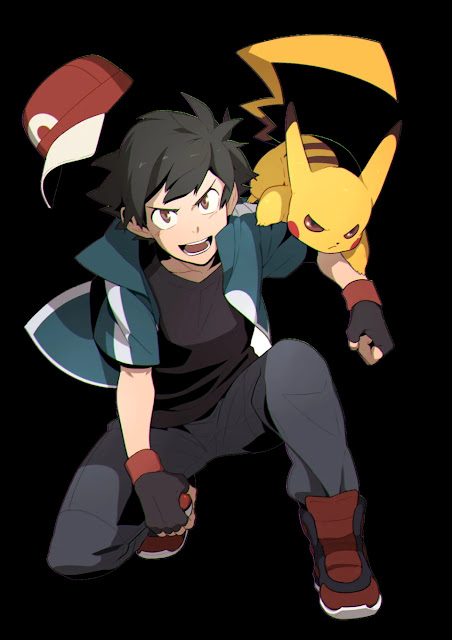 All we need is the Trainer Moves List, an Inventory List, and the Starter Pokemon. This post will deal with the Trainer Moves, including the special Runar Synch Moves, a unique feature of the Alfmork Region.
I'll start off with Trainer Moves
Trainer Moves are techniques that enable characters to boost or modify the stats and abilities of themselves, their Pokemon, their allies, their allies' Pokemon, and even opposing Trainers and their Pokemon. These abilities are akin to Feats or Talents in other TRPGs.
PCs start with a single Trainer Move of their choice during Character Creation. After completing the Tutorial Stage/Introductory Adventure, they may choose two more for a total of three to start their Pokemon Journey.
Note that some Trainer Move require the user to have special Advantages (such as being Psychic) or only work with particular Types of Pokemon. If there is a character requirement it will likely be noted under Story Cost/No. of Uses. If there is a Pokemon Type requirement it will be noted under Target, indicated by the Pokemon Type Symbols. 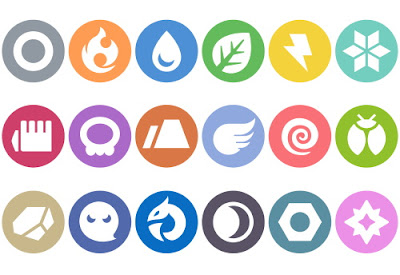 Top Row, Left to Right:
Normal, Fire, Water, Grass, Electric, Ice
Middle Row, Left to Right:
Fighting, Poison, Ground, Flying, Psychic, Bug
Bottom Row, Left to Right:
Rock, Ghost, Dragon, Dark, Steel, Fairy.
The first thing listed is the name of the Trainer Move, following by the Story Point Cost and the Number of Times it can be used in a single Battle/Scene. You must spend the Story Point Cost after declaring the maneuver but before it is executed. Usually Trainer Moves can only be used one time each but not always. Next is the Target, the recipient of the Move's effects, and the Type of Move it is - Attack, Defense, Enhance, Heal, or Hinder. Finally we have the Description, which explains what the Move does in game terms.
Trainer Moves are primarily used in Battles but many have out-of-combat applications as well. Most initiate immediately upon being used and only last for a single Action. In order to use a Trainer Move, declare which one you are employing at the start of your Attack Action or in response to an Attack as a Defense Action, during your turn. Enhances and Hinders must occur on your Attack Action but you can Heal on your Attack or Defense Action. If using the Move to aid an Ally you must expend an Action/Move before that Ally goes, then you announce which Trainer Move you are using, then that Ally may take their Action/Move modified by your assist.
Be aware that a single round in a Pokemon Battle/Scene is over when everyone has used all their Moves/Actions. Moves come from your Pokemon, so make sure you know how many Moves you get by checking your Pokemon's Move stat. Most Pokemon are only going to have one or two Moves but more powerful, highly Evolved Pokemon can definitely have more. If you switch Pokemon during a Battle/Scene, subtract the number of Moves you've already taken from the new Pokemon's Moves total. The result is how many you have left that round.
Example: Emma is an accomplished Pokemon Trainer specializing in Cat Pokemon. In a Battle against Team Usurp she begins with a Purugly, which has a Speed of 11 and gets 2 Moves during each round. In the second round of the fight Purugly uses its first Move to Attack but then gets seriously injured by its opponent. Emma uses the second move to recall Purugly and put out Zeraora. Zeraora has a Speed of 14 and 3 Moves. Subtracting the Moves Purugly already used, 2, the completely unharmed and tip-top Zeraora has one more Move it can take this round. 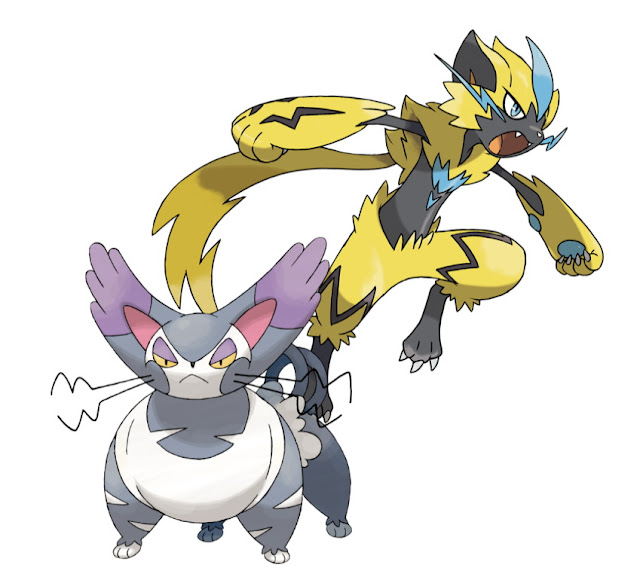 Here are 39 Trainer Moves for the start of your game and ours. More will be added later. This should hold us over for a while though. Additional Trainer Moves can be obtained following Milestones or they can be taught to your Pokemon Trainer by a Trainer of higher Rank that knows the Move. 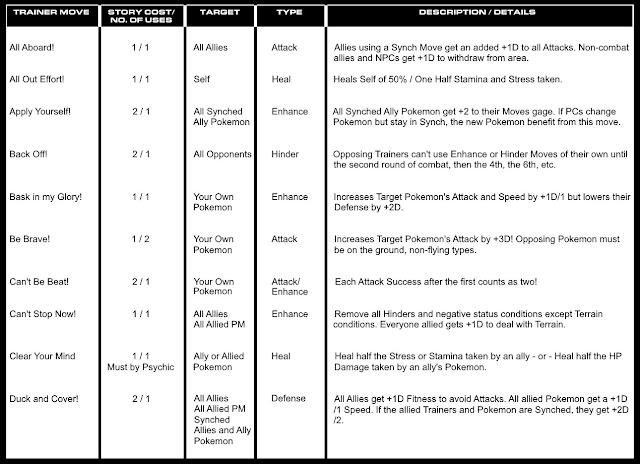 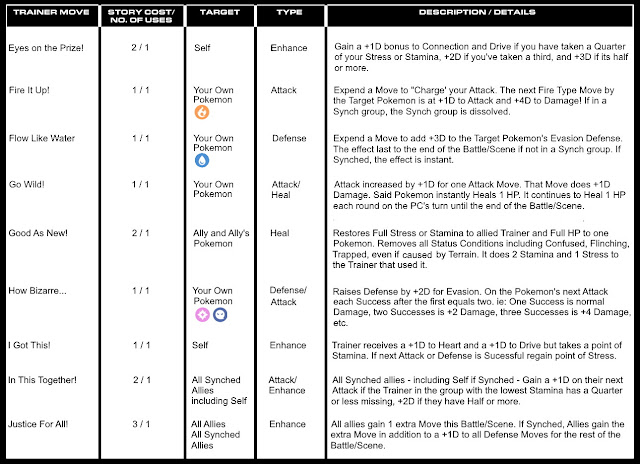 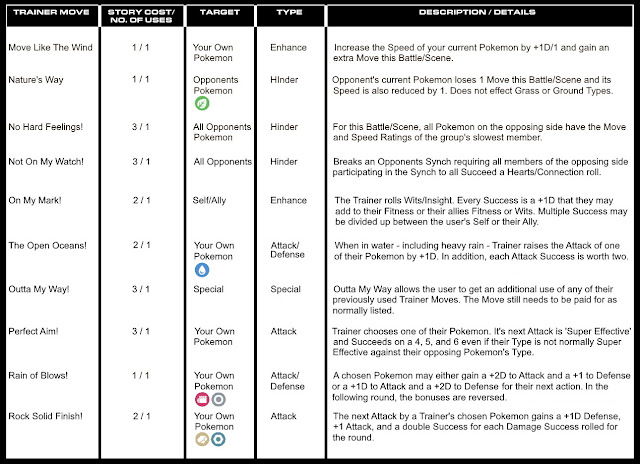 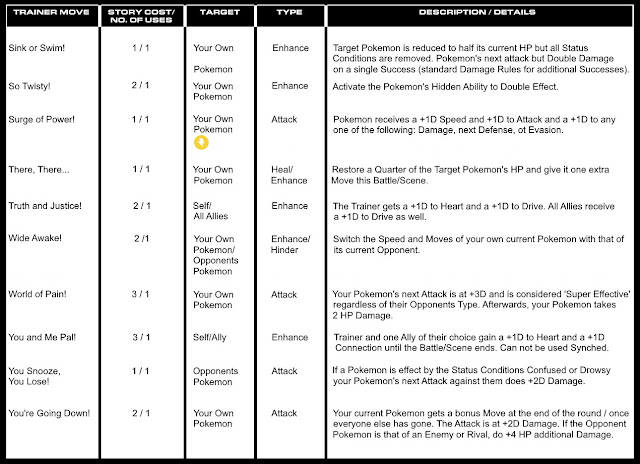 Next up are the rare and unusual Runar Synch Moves! What are they? How do they work? What are Runar and what is their connection to the ancient history of the Kingdom of Alfmork?
Stay tuned,
AD
Barking Alien
Posted by Adam Dickstein at 11:36 PM