Greetings all, short post today, just going to announce a little thing I've been wanting to do since, well, March two years ago...


MARCH 2014 will be MUPPET MADNESS MONTH
PART DEUX!
Why 'DEUX'? Well duh...or maybe deuh...it's because I have run a good number of sessions of The Muppets RPG now, learned some things, tweaked some things and I'm looking for an excuse to add new material. Plus, I will be finishing up and exploring some variations on the game including The StoryTeller, Labyrinth and Dark Crystal 'expansions'.
Why March? Well, I love alliteration and Muppets March Madness Month sounds waaay cooler than Muppets April Madness Month. Also, I did my first Muppets Madness Month in March of 2011. Thirdly, there is this little thing going on in March 2014 regarding the Muppets called...
A SEQUEL BABY! 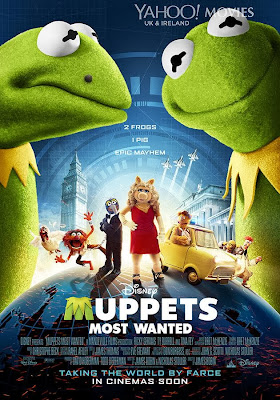 This film looks like it's going to be pretty darn good if I do say so myself. Much more action-y than your typical Muppets film with the usual great cameos (actually the one area the previous film fell short IMHO was that the cameos were kind of weak), amazing puppetry and tons of classic Muppet style humor.
Plus, check out how...there is no other was to say it...badass! Sam the Eagle gets to be as a CIA Agent. Go Sam!
Here's the trailer!
Yeah!
So watch out for the film and more maniacal, Muppet mischief here at Barking Alien this coming March.
Have a Great Weekend!
AD
Barking Alien
PS: Thank you to those who have made donations. Not out of the woods yet but feeling good about it. A little help goes a long way.
﻿
﻿
Posted by Adam Dickstein at 9:14 AM