I had a wonderful time this past weekend.
I got the chance to play in a very cool, FATE variant game on Friday night, was able to run the twentieth session of my Traveller game on Saturday (after a month and change hiatus), and spent the majority of Sunday with my mom, my sister, my brother-in-law, and my nephew.
Much of the time with the family was spent looking at old pictures, including some I haven't seen in ages. A number of them featured family members we have since lost, including my father, and my grandparents.
Among the yellowing photo albums, I found this picture, which I can honestly say I have never seen before. 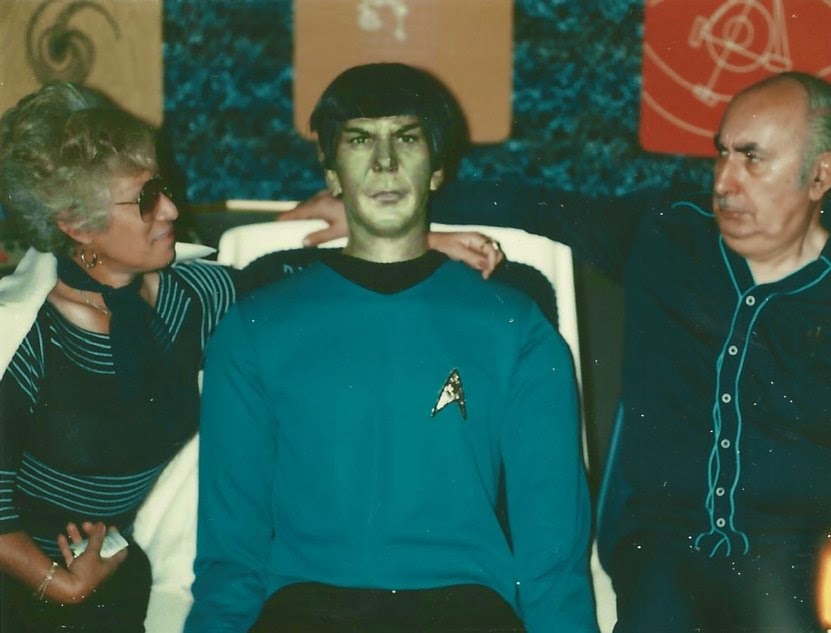 This is a picture of my maternal grandmother and grandfather (whom we always referred to as 'Poppy' or 'Pop'), at some kind of wax museum in California.
My mother and grandfather were always quite meticulous about recording the dates on their photographs, as noted by this writing on the back of the picture. 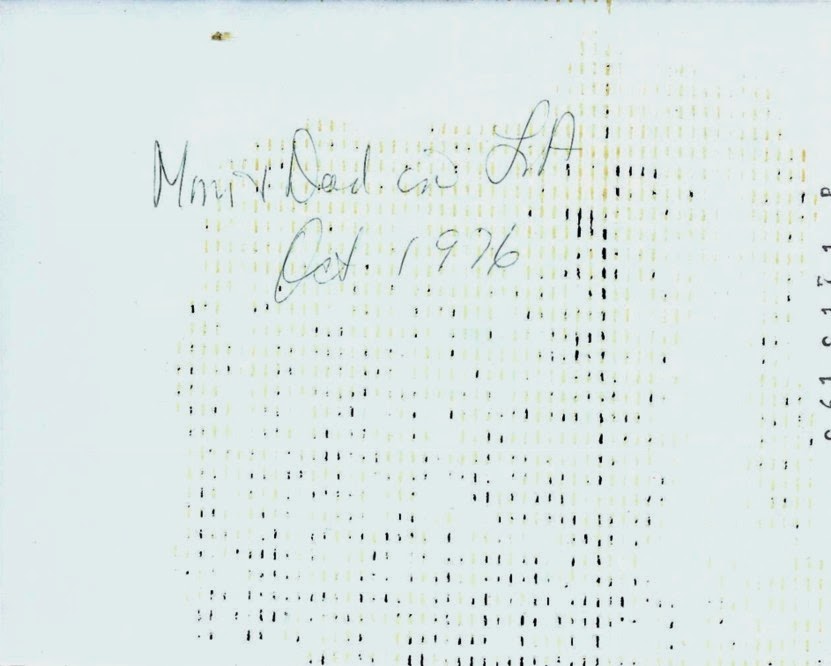 (Nowadays Mom is so tech savvy and cool she has everything saved to her iPad or Instagram, or whatever new fangled doohickey all the kids are going on about)
I've spoken about my Pop before, and it was a very odd feeling to see this picture, having never viewed it prior, when a) this has been in the family's albums for 38 years, and b) my family knows what a huge Star Trek fan I am.
It gets weirder...
So, I mentioned above, at the very beginning of the post, that I played in a homebrewed FATE game on Friday night, right? Well, as it turns out, this is the group I've been gaming with occasionally wherein my friend Dan (normally) runs his homebrewed Superheroes game. As a change of pace, we all agreed to try something different, and have other members of the group run other things for a session or two.
The first of these alternative sessions was a World War II era game where the PCs are part of a secret, 'Allies' sponsored team of military specialists who fight the paranormal. It's a mix of Sgt. Rock and Easy Company, BPRD from Mike Mignola's Hellboy series, and Stalking the Night Fantastic's 'Bureau 13'.

Anyway, it was a great game, cool set up and a great cliffhanger. The next session with this group will be Superheroes again, and then we'll return to this soldiers against the supernatural game.

At the end of the evening on Friday, we were discussing ideas for other games and who might run them, so I offered to run Star Trek. As I got to know a couple of the guys (and vice versa) in the first place because I had run Star Trek for them at one of the RECESS conventions, the suggestion went over really well.

Then on Sunday, I find this photo.

I don't really believe in such things, but perhaps it is simply the universe's way of telling me that probability will always steer me back to Star Trek somehow, someway, no matter what.

If it is more than that...well, thank you Poppy and Grandma. It was both inspiring and heartwarming to see you again.

Posted by Adam Dickstein at 2:07 AM