Before I go deeper down the wormhole of Star Trek Traveller, I'd like to tell you about a some great gaming experiences I had over the holiday vacation.

Between December 24th, and December 31st, I got the chance to run a lot of games. How many you ask? I don't even remember. A LOT.

While they all went over well, two in particular were really fun, and I can pinpoint why quite reasonably.

Now when I say easy, what I mean is that it required very little effort on my part to get the games set up, started, and going smoothly. The players displayed no resistance to the genres, nor to any of the details of the setting, story, or rule mechanics.

Basically, in a very zen sort of way...I wanted to run a game for my friends. I did. They wanted to play a game I was running. They did. It was fun.

Because in order for me to run a great game, I need players who want me to run, and want to participate in, a great game. Furthermore, it would be awesome if they want a great game from me more than they want to get hung up on their various individual, er, hang ups.

Wouldn't that be grand?

The first of the two games was a DC Adventures / Mutants & Masterminds 3E game with my ex-wife, my friends Luke, and Lily, and a bunch of  'alumni' kids from the Tutoring Center. Inspired by the DC Comics Holiday Special issues over the years, the Justice League, and some of their Young Justice proteges went up against the Penguin, Sinestro, Bizarro, The Floronic Man, and the wicked warlock Wotan! All in a desperate battle to save none other than Santa Claus!

The Justice League of Earth-602!
Why 602? That's the address of the Tutoring Center, LOL

The most amazing thing about this session was how well the players took to their characters, when the vast majority of them aren't comic book readers. I've noted before that this group, largely middle school and high school students of Chinese decent, have never read American comics. Their only knowledge, and exposure to these characters comes from the animated and live action shows on television. Add in the fact that only one of the adults in the group was a huge comic fan (and more well versed in Marvel mythos), and it repeatedly astounds me how well they all nail these well-established characters.

Each person's interpretation of their character was very much influenced by the individual players' familiarity:

Green Lantern was very much the GL of Justice League Unlimited.
Aquaman was Super Friends style.
Flash and Kid Flash were a mix of the CW show, and Young Justice.
Martian Manhunter was a mix of Justice League Unlimited, and the Supergirl CW show.
Aqualad was totally Young Justice.
Superman was classic Silver Age, if a bit powered down (JLU also?).
Supergirl was straight out of the CW show.
Wonder Woman was Super Friends/Silver Age, complete with Invisible Jet.
Batman was pretty much Batman: The Animated Series.
Green Arrow looked classic, but was really more like the Arrow TV series.

If you are asking yourself, "Wait...were there actually 11 players?!", then I can tell you the answer is yes, most assuredly.

The second awesome game I ran was MACROSS - Return of the Blue Dragons!

A sequel to the 1986 MACROSS - Blue Dragons campaign I ran in high school. Two of my old high school buddies, David Concepcion, and Eric Flores, were on hand to revisit my version of the Macross universe 30 years later (both in game, and in real life).

David played the son of his original character, while Eric played a bishonen character whose gender is never clear throughout the scenario.

Numerous upgraded elements from the original campaign were added including the PCs' base of operations - The UN Spacy Odyssey II replaces the previous Odyssey), upgraded versions of the variable space fighters - the VF-3 series - and both of A.J. DeLorca's kids following in their parents footsteps, and becoming Valkyrie pilots. 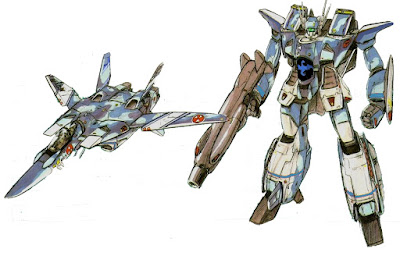 
With a thirty year gap between the last session of the original series, and this one-shot, one would think it might have been hard to get back into the swing of things. Nope. Not one iota.

For Dave, and I it was really just continuing the campaign as if little time had passed out of game. As if we've been meeting to run this every month for three decades. Eric, for his part, merged into our lane with ease, and contributed an interesting character, with good tactical skills, and even better social ones.

Snappy dialogue, fast paced combat, and a classic science fiction plot made this so much fun we were bummed when the session ended, and we realized, 'Crap. This doesn't continue next week, or even next month.' Sad panda.

Dave, as I have mentioned in the past, now lives in Boston. He is a working, single parent, and though he makes trips back to NYC every few months, he doesn't always know if, and when he'll be visiting.

Eric is a GM regularly running his own campaigns.

I have work six days a week (my own Dog Walking Company, and one day teaching), yet still manage to run, or play twice a week (online, and Friday nights), and once a month (my monthly group campaign, which is currently my homebrew Superheroic Medieval Fantasy setting using Ars Magica rules).

Still, and all, I am looking forward to more gaming like these two sessions this year. For my 40th Anniversary, I want - no NEED! - to get back to gaming like I use to - an immersive experience, with players that buy-in and embrace the setting, and their characters, and can't wait to see what happens next. Additionally, we do so without the deconstructed, meta-viewpoint so prevalent in modern gaming.