My previous post on the subject of a Pokemon RPG campaign was heavily abridged and edited from what I had originally intended to write.

Part of the reason for that (a BIG part actually) was that Blogger was acting particularly craptastic while I was putting it together.

Another reason was that I felt like I needed time to organize my thoughts on the subject in a very specific way. I want to excite and inspire you all out there, and maybe even my player groups, while at the same time not giving too much away should I get the chance to run it for anyone who reads this.

It's a bit like, "Please read this post about an awesome idea I have, but...ya'know...don't read it too much." 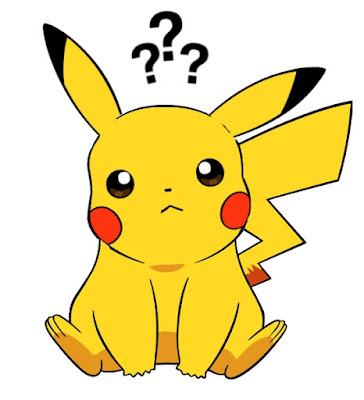 The system I am looking at for this is an unofficial, fan-made, totally free project called Pokerole, or Pokemon, The Role Playing Game.  I would like to point out that this is a well polished, visually impressive work, and that's important to me. The art, graphics, and overall design fit the universe of the Pokemon video games especially well, and therefore maintain the right look and atmosphere for a RPG set in that milieu.

There are a number of similar projects across the internet, many of which are D20 compatible (or at least related), but for me this Pokerole Project really hits the spot.

With that, I would like to discuss those ideas for running a Pokemon RPG that I think will get the blood pumping without giving too much away. Here are just some of the plans, options, possible houserules, and ideas that just won't let me be unless I explore them.

Every Pokemon game needs a name. In fact, it needs two.

We started with Pokemon Red and Green (Red and Blue internationally), went on to Gold and Silver, Ruby and Sapphire, Diamond and Pearl, Black and White, X and Y, and last, but not least (far from it) Sun and Moon.

There have been a number of spin offs, but these are the main titles.

The significance of having two versions of each generation of Pokemon game is that the two versions have Pokemon exclusive to one version, or another. The idea is that players will catch Pokemon and trade them with friends who purchased the version different from their own.

When the idea for a Pokemon game first came to me I immediately starting calling my project 'Pokemon AD', largely as a place holder until I could think of a better title. Then I started getting the idea that, like each of the main Pokemon games, I could split the campaign's 'meta-plot' into two parallel storylines: Pokemon Astro and Pokemon Dwimmer!

At the start of the campaign, before character creation, the players much each decide which version they 'purchased'. Basically, are you playing the Astro or Dwimmer?

Your chose changes which starting Pokemon are available to you, and gives you different information on the nature of the region you will be adventuring in. Also, certain types of Pokemon with be more aligned with the Astro, or Dwimmer aspects of the campaign giving the PC an edge when using Pokemon related to his, or her version 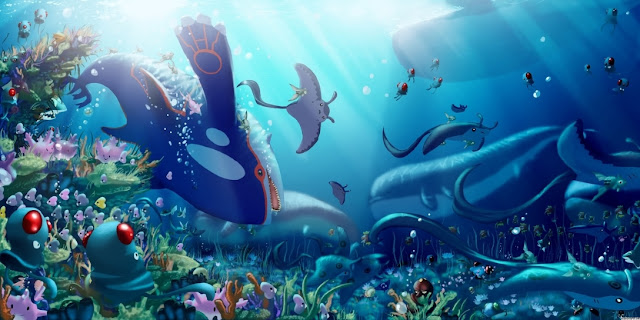 Each Pokemon video game (and each season of the animated series) explores a new and different section of the Pokemon World. These sections, known as Regions, are patterned after, or inspired by real world locations. Every Region has its own character, its own geography, customs, and its own Pokemon.

So far most of the Regions have been patterned after provinces of Japan, and understandably so given the origins of the Pokemon games, and anime. Kanto, Johto, Sinnoh, and Hoenn are all based on Japanese islands (though share some traits with Japanese territories also occupied, or influenced by other countries).

The Kalos Region is similar to metropolitan France (Paris, and other cities), while Unovo is clearly New York City, with some of the more forested areas of New York and New Jersey being used to flesh out the wilderness needed to accommodate wild Pokemon.

The most recent game, Sun and Moon, takes place on a string of islands akin to Hawaii, and is referred to as the Alola Region.

I love the idea of starting the players/PCs in a new Region of the Pokemon World. It provides an unknown, open area to explore, while at the same time providing that sort of contained area with which to start building a campaign. As all Regions exist on the same world, there is nothing preventing the PCs from exploring other Regions after they accomplish whatever it is they wish to accomplish in their starting/home Region.

My present idea for a Region combines elements of Canada, and the North Western United States. At present, its called Canu (pronounced KAH-noo).

Flag of the Canu Region

Traditionally each Pokemon game begins with the player choosing one of three starting creatures - one Fire Type, one Grass, or one Water. 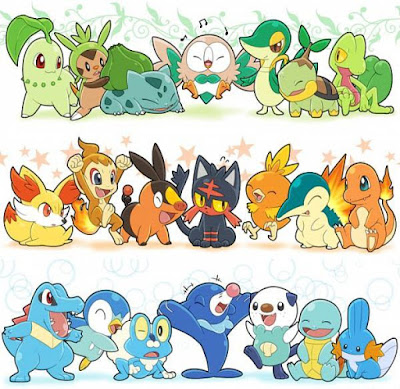 I plan to do things a little differently for Pokemon AD.

In the video games there is but one player for the most part, so three options are fine. For a tabletop RPG which could have a fair number of people involved, I want to expand the selection. Also, and this is where the Gaming Epiphany comes in, I want the different 'versions' of the game to effect the PC's choices.

So, all the PCs will have the option of choosing one of the following:

A Fire Type, a Grass Type, A Normal Type, or an Ice Type (UPDATE: Changed Water to Ice as it fits the setting better).

Depending on whether the player choses Pokemon Astro, or Pokemon Dwimmer at the start of the game, they may also choose between two additional types:

For Pokemon Astro players the additional two choices are an Electric Type, and a Psychic Type.

For Pokemon Dwimmer players the additional two choices are a Fairy Type and a Ghost Type.

Hopefully this will also help connect the players, and their PCs, to the larger Astro and Dwimmer meta-plots. 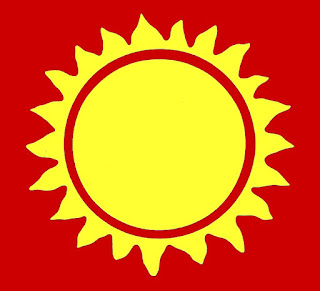 The flags of the Third Galactic Imperium fly at half staff across Charted Space today, as Loren Wiseman, one of the co-founders of Game Design Workshop, and key creative people behind the Traveller RPG, has passed away.

I am big fan of Mr. Wiseman's work, and have been for many years. His name appears in a number of my past Science Fiction RPG campaigns as a homage to his incredible contribution to the hobby.

He was also, according to those who knew his personally, a heck of a nice guy.

My condolences to his family, friends, and fellow fans everywhere.