Can you believe it's February already? This year is already going fast.

Anyhow, let's get down to business...

Have you seen the new Dreamworks reboot of Voltron on Netflix? 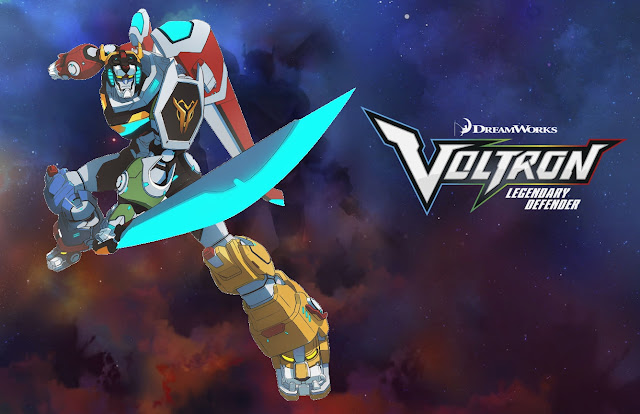 For those unfamiliar with Voltron, it was originally a Japanese animated series entitled King of the Beasts GoLion. The series was adapted for American television with a story written by Peter Keefe and John Teichmann, founding partners of a company called World Events Productions in 1984.

There are a great many folks in the 30-50 year old range who have a deep affection for this show. As with many Japanese animated programs brought to the U.S., and altered during the 80s, I never developed a taste for it. The problem being that I was already exposed to the original Japanese version, and therefore found the American version more like a knock-off.

This feeling got even more pronounced when the later versions of Voltron were introduced. The further incarnations were based on Armored Fleet Dairugger 15 (Voltron II in America), and GodMars (If I remember correctly - used as a tv movie/special) which unlike GoLion were shows I was more interested in.

All in all, I never became a fan of the American phenomenon of Voltron.

In spite of this (or perhaps because of it), I found myself really intrigued by the rebooted version entitled, Voltron, The Legendary Defender. 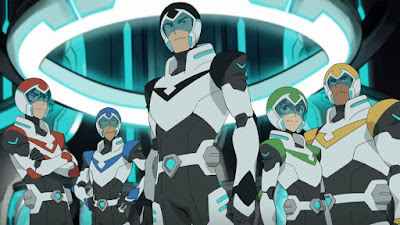 The Paladins of Voltron!

Although ostensibly a reboot, I viewed it as an original program. The original was an adaption of an already existing Japanese product, where as this Voltron was actually built from the ground up to be Voltron!

I've now watched both seasons, and I have to say I really like it. It isn't perfect, it has its flaws, but overall I find it a ton of fun. It also provides some excellent inspiration, and insight into how to effectively run a super-heroic, giant robot anime style RPG campaign.

I will get to my RPG related ideas in a follow up post, but first I want to do a general overview/review of the series (or at least how I see it). 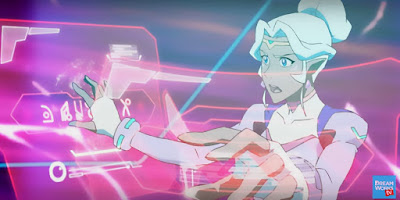 The designs, animation, script, story, and pretty much everything that goes into the show is top quality. It is all very well done.

I am particularly impressed by the visual design of the 'Castle', the team's starship headquarters. I also really like the look of Voltron in fully combined, robot mode.

The aliens they encounter are very neat, looking reminiscent of the alien species from another favorite animated series of mine, Oban Star Racers. Going hand-in-hand with the nice look of the aliens in the series is the impressive setting artwork. The artwork done for the planetary environments is really cool indeed..

I like all the characters, each having a distinct personality, a specialty, a unique weapon, and an interesting background/subplot. Well...almost all of them have that. I'll discuss that a bit in the next section.

I also like that each pilot's robot Lion has unique powers, and special weaponry all their own. The connections between the Lions and the elements they're linked with are handled much better than they were in the original series. There are some distinctly mystical, and emotional relationships between the Paladins, their Lions, and the psychic/mystic forces the Lion draw their powers from.

An excellent balance is achieved between the science-fiction, and mystical components of the setting and story. The result is a Space Opera setting that is one part classic super-robot show, and one part modern character driven action/comedy.

The only real weakness of the show is that when it fails to do what it is good at, it shows.

For example, whereas Shiro, Keith, and Pidge have intriguing backstories, motivations, and goals, Lance, and Hunk are mainly comedy relief. This wouldn't be so bad except for the fact that it makes Lance and Hunk seem like especially weak characters by comparison. The two are considerably less interesting then their fellow Paladins at best, annoying distractions at worst.

Hunk suffers the worst because his comedic elements don't work as well as Lance's do. In addition, he is routinely depicted as cowardly, with a weak will, and constitution. Why is he even there? I like some of Hunk's dialogue, and feel the voice actor does a decent job. He, and the character, deserve better material, and more to do.

The Lions are shown to have cool unique abilities, but the enemy mecha are sort of hit, and miss. In the two seasons they've shown I can only recall them fighting the enemy robot-kaiju (Robeasts as they are referred to eventually) a couple of times. I can only clearly remember two of them. One appears in the first season, and returns in the second. The other is in the season two finale 'final boss'.

This is may sound a bit weird, but I am not sure how I feel about the character of Coran. 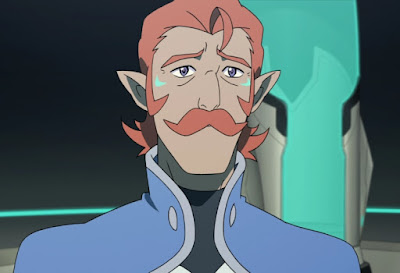 Coran is the advisor to Princess Allura, an Altean male, and an experienced space traveller, and possibly soldier. I say possibly because although it's clear that he served the Altean Royal Family, I am not entirely certain in what capacity he did so.

He is depicted as knowledgeable and compassionate, but also foppish, goofy, and absent-minded on various occasions. The character is more often than not far too comical to be taken seriously, especially during critical events.

The show tries very hard to be an exciting action-adventure, but also still very funny. For the most part it succeeds, but there are many points in which they overdo the comedy and this is particularly true in scenes with Coran. He is so over-the-top, he shakes the suspension of disbelief. His humorous moments sometimes seem less humorous because they are so overdone, and more like a failure on the part of the episode's writer, director, or story editor to comprehend the proper use of the character as described.

That's enough for now. I will follow this up with a post focusing more on what gamers - specifically Anime Mecha and Science Fiction/Space Opera gamers - can learn from the series.