Into The Sea, You and Me

I'm running a fill in game for our Wednesday night Google Hangouts group next week.

As we prepare for our big, upcoming Marvel/DC Crossover mini-campaign, our regular GM Keith has asked for a short break to re-familiarize himself with Marvel Heroic.

Since I expressed an interest in running Anime/Manga style Giant Robots in the recent past, and others in the group have expressed interest in trying out the genre, I am to take this opportunity to run a story I've been thinking about for a while...

Gundiver is a Mobile Suit Gundam 'Side Story' set during the original series 'One Year War', in which the Earth Federation Forces develop an undersea operations Mobile Suit in an attempt to counter the superior aquatic mecha of the enemy Zeon Navy.

Having developed the Mobile Suit first, the forces of the Grand Duchy of Zeon have a head start in the arms race to build the better giant, humanoid machines. While the armies and navies of UN SPACY (the NATO of the United Earth) have a mere half dozen robot designs that they customize and adapt for various missions, the Zeons have numerous mechs specially designed and build for various situations.

When fighting underwater for example, the Earth forces normally use the General Model Mobile Suit, or GM, adapted for aquatic conditions. Later, they start specifically outfitting the RAG-79, or Aqua GM, with the gear it needs right off the assembly line.

Unfortunately, by the time they do so the Zeon forces have the Gogg, the vastly improved Hygog, the Z'Gok, the Z'Gok-E, the Acguy, and the Zaku Marine Type (the mass produced counterpart to the Federation GM). 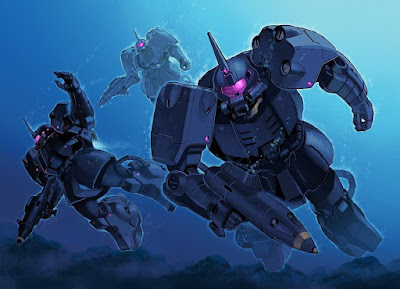 A trio of Zaku Mariners on the hunt for Federation Forces.


Our story will begin in space, where an Earth Federation Space Forces vessel prepares to send a 'care package' to its allies on terra firma. An experimental, prototype Mobile Suit - the RAG-79-G1 'Waterproof' or Aquatic Gundam, nicknamed 'Gundiver' will be orbital dropped to a hidden rendezvous point of the coast of Brazil.

It seems Zeon Intelligence is at the top of its game however, as Zeon forces attempt to insure the thought-to-be-secret 'Gundiver' never reaches its destination...

The game will likely be run with my own, homebrew Extended Mecha system (based on the free RPG Extended Mission). There will be about six players (not including myself as GM), and the plan is for this to be the first of three sessions.

I will keep you posted.

Posted by Adam Dickstein at 7:07 PM