I have decided to make some serious changes in my life.

I will be moving soon, improving my dog walking business, and doing something that means a lot to me in my 40th year in the RPG hobby.

I've decided that a major change in my life is going to be that I stop being afraid of whether, or not I will succeed, or fail, and just do a thing.

Check this out from one of my favorite illustrators, Jake Parker:

I've been wanting to produce and sell a Role Playing Game product of my own design for, well, for forever now. It seems like my Questing Beast, a goal I'm perpetually chasing, but never able to the actual achieve.

That's over. I'm doing it now. I'm working on it even as I write this. I'm making an RPG for sale through DriveThruRPG.

Originally I wanted my first game to be Unfinished Business, my long overdue Ghost Story RPG, but I think that one still needs some work, and it's very niche for a first product.

Another idea was my [as yet unnamed] Star Trek/Space Adventure Parody game, which I've used to run Galaxy Quest, and I am currently overhauling in hopes of using it to run a game set in the universe of 'The Orville'. I may make that a later product if this first one takes off.

Lastly, I've recently been toying with another attempt at an OSR Science Fiction/Space Opera game. Operating under the title Aliens & Astrobases, this is a very tricky project for me to pull off. I like the idea of creating such a game, but I am not a fan of those kinds of games. I feel like I might be able to make something fun to play, but I'm not as thoroughly motivated. It remains an idea on the back-burner (though it's probably the one that would sell to the largest audience. Sigh).

No, the choice for my first product is clear to me now, and really should have been all along. It took my good friend Dave Cotton to point out how to do it, but there is no question that it needs to get done, as it is my best work.

As InSpectres is not a Ghostbusters game, and Starships and Spacemen is not a Star Trek game, this game I am making is in no way a revised, expanded edition of a certain RPG project I produced in March of 2011. With new original characters, a new original setting based on one of my old campaigns, and all new art work, expect a fast, and furious fountain of fun, felt, fur, and foam to come your way later this month.

Just look at the interest in it from those who don't even know what I am doing... 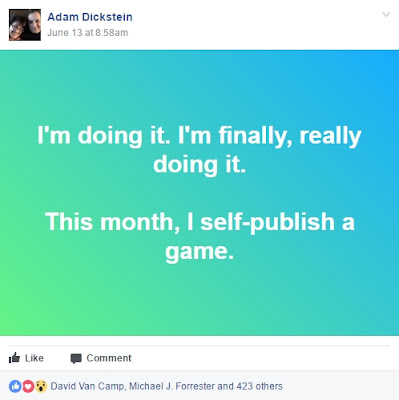 I want to thank the Tabletop Role-Playing Games group on Facebook for being so supportive to a fellow gamer. I also want to thank everyone of my friends, and family for backing me up on this endeavor.

Further announcements as we draw closer to release day.