A Borg Cube is on its way to Earth, and the citizens of the Federation have very mixed feelings... 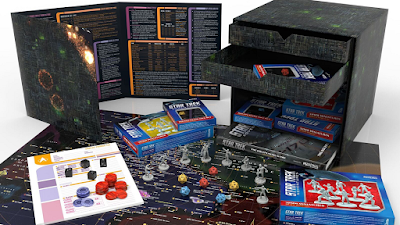 It is time to address the 800 lbs. Mugato in the room ladies, and gentlemen.

Modiphius Entertainment's Star Trek Adventures Role Playing Game, the first official Star Trek RPG since Decipher's, is available for pre-order. Some of the books for the game will be out as PDFs in just a few weeks according to company founder Chris Birch.

The set will contain quite a lot of material, some of it exclusive to the set. The core book cover art is limited edition, the box contains a beautiful, Borg themed Gamemaster Screen, and it has a complete set of all the dice, a set of game tokens, all the miniatures, and everything else the game will consist of when it hits the stores. I believe there is also an Alpha and Beta Quadrant poster map, and some Adventure Tiles (although I am not sure what those are for).

If you feel that's still too much money to spend on a new game as much as you'd like to (because, you know, it is), there is a slightly smaller bundle that was announced just yesterday (in response to fans, and potential customers expressing the opinion that the price of the Collector's Edition Borg Cube Box Set is too high). This alternative Borg Drone Bundle contains everything the Collector's Set does except for the miniatures, their are fewer dice, and none of the Federation Symbol and Red Alert tokens. Do you need these for play? Well...yes...but you could certainly substitute something else.

This game will be expensive. There is no tip-toeing around that. Very expensive. The basic core book alone is going to be about $60 bucks. Sixty dollars. If I were to purchase that, and the first two or three supplements in physical book form (each estimated at $40 based on the first adventure collection book 'These Are The Voyages') - Great Bird of the Galaxy! That'd have to be around $140! That is simply too much money for me. I can't justify that kind of spending.

In addition, I've playtested the game and its only OK. Not great. It isn't a bad game, but it's not for me. Like many games it has a fine core mechanic and then it over burdens it with unnecessary subsystems that complicate things with little benefit that I can see. The subsystems are also (personally) aesthetically bothersome. It's like a simple dish, fine on it's own, buried in garnish and sauces. It becomes not just unneeded, but also unappetizing.

Lastly, I've been gaming in the Star Trek universe since 1982 with FASA. This game doesn't surpass that game, nor Last Unicorn's ICON System, which I feel is the best Star Trek game ever made. If what you are offering isn't better than what I am already using, why switch?

In the end, I plan on getting a physical copy of the core rulebook for my collection, and possibly the upcoming Command, Sciences, and Operations Division books on PDF for ideas and source material. Beyond that...I just can't see myself getting into it.