Ugh. We were doing so well.

These are the kinds of questions I come across in this challenge [and others] that generally bore me.

Why? Well for one thing, I feel like they ask this or something like it every year. They don't, not exactly anyway, but it feels like they do. I could almost swear that some other blog challenge asked this exact question not long ago. It just seems too familiar.

Not only that, but question #5 is roughly the same question as #4. Isn't it well within the realm of likelihood that my favorite and most memorable NPCs are the same NPC? Why waste two questions on this?

Man oh man, I have come across and created so many memorable NPCs over the years I have no idea where to begin. In addition, I don't want to cover someone I've already covered. I think I'll avoid PCs who later became NPCs, as well as NPCs who other GMs created because it's my answer on my blog so it might as well be one of my NPCs.

Allow me to introduce you to Lieutenant Gravph, Assistant Chief Engineer of the USS Prosperity, NCC-1585, a Ventura Class Light Cruiser exploring the Beta Quadrant spinward of the Typhon Expanse in the Original Series era. 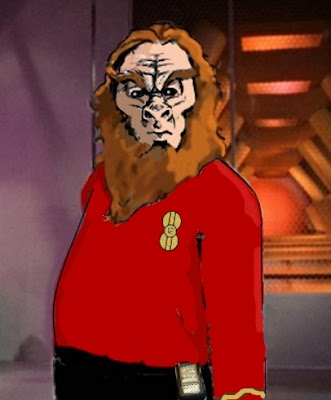 Mr. Gravph is a popular, reoccurring NPC in my current Star Trek Adventures campaign, Star Trek: Prosperity, and definitely one of my personal favorites.

Gravph first appeared in the 'pilot' session of the game but didn't receive a proper name until a few sessions later. He primarily serves as the right hand man to our PC Andorian Chief Engineer, Lt. Commander Bhoth, as well as our go-to Transporter Chief. Over time and numerous day-saving lucky rolls, Gravph became the person our PCs want at the Transporter controls when beaming under less than perfect conditions.

The other major purpose Gravph serves is as a counterpoint to Bhoth, as their personalities, as well as their command styles, differ quite a bit.

Bhoth has little to no sense of humor, is constantly try to prove himself, takes daring risks, and adheres to a strict personal code of conduct.

Gravph has a dry, sardonic wit, is very comfortable in his own skin and in his position, makes calculated decisions, and is generally pretty flexible in social situations. That last part is interesting as he is a Tellarite, and Tellarites love to argue. Debates, disagreements, and heated discussions are an art form among the Tellarite people and Gravph is no exception. I've made it clear however [through his dialogue and actions] that he never argues just to argue. If he agrees with you about something he'll calmly admit you're right, but probably remark, "You were correct. I can not argue with your logic. Do you need a medal now? A commendation? Don't get to used to this feeling or else trust me, you'll be disappointed all too soon."

He has a gruff, deep voice, and often makes the face you see in the image above when you ask him a question whose answer seems obvious. I love doing his voice, his expressions, his mannerisms - he's just a fun character to portray and see the players interact with.

In the past two seasons, though far more in the current one, Gravph has been given the Conn when the PCs go off the ship for a landing party. The Captain trusts him with her ship and the authority of the center chair. He's also interacted a lot more with other departments and characters as opposed to just Bhoth, such as [most recently] the Captain, the Vulcan First Officer, and more rarely our Intelligence/Communications Officer.

What makes Gravph so special as a character is his normal-ness. He didn't graduate top of his Starfleet Academy Class. He has no special abilities or knowledge per se. Gravph is just this blue collar fellow who enjoys his job, loves giving his boss a hard time yet knows when to dial it back, and makes the PCs feel like they don't have to babysit their Starship. They can leave and go down to the planet.

They are comfortable knowing it's in good hands.

This year I started writing up these posts early; most were completed a few days in advance of when they were to be posted. All but this one.

Each time I sat down to write it, I would get a quarter of the way through and suddenly feel very sleepy. It was as if attempting to answer these questions literally drained my energy and enthusiasm. I've seen boring questions but WOW! Nothing like this.

Do not be alarmed. There are more and better questions on the horizon.