It's GM Appreciation Day today and I just want to say, I appreciate you!
Yes you! All of you; whether you run things the way I do or completely differently. If you enjoy a more narrative, story driven style or have a more tactical, boardgame/wargame approach, I salute you! I don't care what you're running either, be it classic Traveller or the newest indie game, just know that I appreciate you.
Unless you run D&D. Then you're a DM not a GM and have to go fend for yourself. Run along now, there is no love for you here. Wait...what? Really? *Sigh* Very well. Barkley informs me that DM are technically GMs as well so I suppose I can through some appreciation your way.
Just don't get used it. ;P
Back to Anime/Manga RPGing...
Now that we've coated the canvas and painted on the Anime/Manga style with a few broad strokes, it's time to go in and add some details. A little color here, a touch of texture there...What's the Anime equivalent of Bob Ross' 'Happy Trees'? Happy Kaiju? Oh well, it's time to talk tropes.
While the various genres within the Anime/Manga medium each have tropes of their own, right now I'm still going to paint a bit broadly after all and cover things we see in nearly every series.
Characters 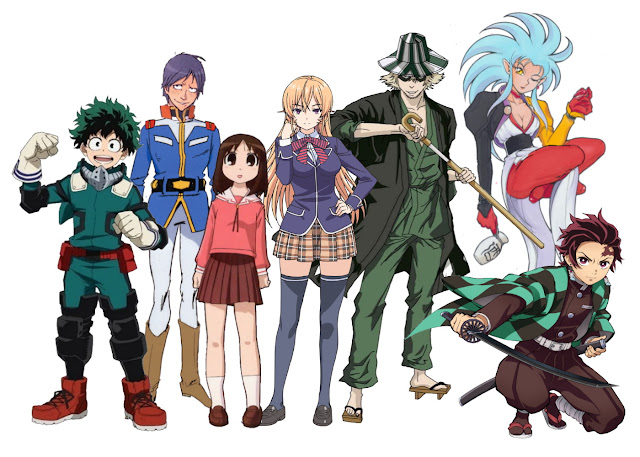 Anime and Manga characters generally fall into one of a large number of archetypes. Several of the names given to these archetypes were coined as they relate (primarily) to romantic interests as that is a popular plot element or subplot regardless of the type of series you're following. I will talk more about Anime/Manga Romance and Comedy in greater detail in an upcoming post.

I guess it needs to be said that no, these are not the only types of characters you will ever see and no, it isn't impossible to twist a cliche and turn it on its head. In fact, I am not detailing anywhere near the complete list of every standard character type seen throughout the history of Anime. That would be ridiculous, making this post ten times longer than it already will be. These are simply the types of characters you see most often that lend themselves to being used as Player Character in tabletop RPGs.

I would argue that the best Anime/Manga characters are actually some combination of these archetypes. Furthermore, while I hope this post is helpful, the best way to get to know the types of characters you encounter in Anime and Manga is to watch Anime and read Manga.

Your mileage my vary.

The Anxious Hero Character: This is a very popular character type in Anime and Manga that, while not uniquely Japanese, is certainly seen more often there than in traditional Western Adventure stories. In the US and elsewhere, the hero is universally brave, tough, and confident. He (it's usually a he isn't it?) gets by on his good looks, mean right hook, and being good at practically everything he does exactly when he needs to be.

The Anxious Hero is the opposite of this in many ways. This character lacks confidence, isn't particularly good at anything at first, might be clumsy as a result of being nervous, doesn't want to fight, and often has not desire to get involved in the craziness going on around them at all. By interacting with the other characters they develop friendships, a much needed sense of confidence, and the ability to pull through and save the day.

I would say from my own personal experience as a GM, this is the toughest one to see realized at a gaming table. Western gamers, generally speaking, have trouble playing a lack of confidence. They never want their characters to appear frightened, unsure, or unprepared. If someone gets it, gets the concept of this character, then they will usually shine in an Anime/Manga themed game.

The Arrogant Character: Referred to in Japan as the Himedere (female) and Oujidere (male), these characters see themselves as Princesses and Princes and expect everyone to treat them as such. Common traits attached to these types are them being actual royalty or nobility, exceptionally wealthy, the children of well connected and/or famous people or being famous themselves (they are actors or pop stars). A variant on this is the Kamidere or 'The God Complex Character' who believe themselves exceptional in all ways and superior to everyone else just because they are them. Both of these character types are more commonly villains than heroes but in some instances they may be seen as anti-heroes (such as the main character in the series Death Note).

The Cynical Character: This character is cold, hard-hearted, blunt, and sometimes may include traits such as arrogance and a biting sense of sarcastic humor. Other times, the character is more quiet and aloof. Their cold demeanor can make them seem emotionless and unfeeling but in truth they are shielding themselves and hiding a deep caring for family, friends, and their significant other or crush.

A notable variation on this archetype is the Hinedere, whose cynical world view comes with a high level of arrogance.

The Disciplined Character: Serious, focused, no nonsense and often staring down their nose at the more undisciplined in the group, this character tends to have dark hair, glaring dark eyes, and glasses are not uncommon. Proper discipline in all things is key with this character. Here is someone who knows the proper procedures, protocols, and rules and follows them. In school settings this is your Class President, often a member of the archery, fencing, or kendo club. Chess is usually their game of choice most.

A variation of this is The Dedicated Character who shares many of the attributes of the Disciplined one but is more focused on a single thing. A Scientist, a Corporate or Government Middle Management person, and the Captain of the Swim Team are all good examples of this character archetype.

Sometimes, though not often, there is a little of the next character type mixed in.

The Energetic Character: More often female than male, nearly always young, this character is active, positive, and looks to encourage everyone and brighten their day. In school settings they head up class project because they enjoy the excitement and camaraderie, not necessarily because they are acing their classes. Likewise they join after cool clubs and participate in sports, those not because they are (initially) good at the subject or sport in question.
The Loveable Buffon/Ditz Character: Bakadere are not too bright, often clumsy, and usually lack a degree of common sense. They may be spacey/ditzy or simply none to clever. Universally these characters are also sweet, kind, innocent, and truly good. They mean well above all else and are very loyal and trustworthy, although easily tricked or fooled. Some are childish or immature for their age while others are merely not what you would call 'worldly'. In addition to their overall good nature they are often carefree and optimistic.
A popular variation is to see the character as one of the other, less-extreme archetypes most of the time and they only become Bakadere in the presence of their crush or a beloved mentor or celebrity.
The Undisciplined Character: Often lazy when not partying, prone to excessive drinking, fighting, gambling, and other hedonistic or scoundrel-like activities, this character is a hot-tempered but often well meaning troublemaker. The two variations on this archetype seen most often are the Dameko - whose vices and exploits often burden and complicate the lives of their friends and loved ones - and the Hetare - who need constant support from those that care about them so they remember to do things like wake up and go to work, bath, or generally function like the average person. The Dameko is often good at what they do while the Hetare lack even basic life skills.
As noted early on in this post, there are dozens and dozens more archetypes, some describing more specific, niche personalities, others specifically aimed at antagonists, and still others are less about personality or mindset and more types of characters one might encounter.
For example, the Nisetoshi is a ancient character, often hundreds or even thousands of years old, who looks and acts young and even immature. They will periodically reveal their true nature by dropping deep knowledge or wisdom. This doesn't tell you anything about their personality really, as that can vary greatly.
The Chunibyo is a character who claims to possess special, often supernormal abilities. They dress eccentrically, may have odd looking eyes or hair, and effect a peculiar speech pattern. Often they actually do have abnormal abilities but it should be in question for a while before they are revealed.
Chugokujyo are garbed in traditional Chinese dresses, often end sentences with 'aru', and are prone to knowing martial arts. They need not actually be Chinese, though many are. Chun-Li of the Streetfighter video game franchise and Shampoo of Ranma 1/2 fall into this category. Again, both fit the bill but are very different characters personality-wise.
FINAL UPDATED EDIT: I have been writing and rewriting this Campaigns I Have Known post for four days now and I can not for the life of me get it the way I want it. I am just going to stop for now. It is taking too much of my time and delaying further exploration of the subject. I will get back to it at a later time.
My apologies everyone.
AD
Barking Alien
Posted by Adam Dickstein at 1:28 AM