I'm a huge fan of Giant Robots but...you knew that.

If you didn't, if you're not a regular reader of this blog and aren't up to speed, I am. Really huge. I've been a Japanese Mecha Anime and Manga fan since before they made the mass transition overseas to Europe and the United States. Also, why aren't you a regular reader? Get to working on that!

Truth be told I love robots in general, from real life ones to Star Wars Droids, Data of Star Trek: The Next Generation, Wall*E, and so many that came before and after these iconic examples.
That said, there is a special place in my heart for what has come to be known as Mecha, the often gigantic, piloted, usually humanoid machines of Japanese pop culture entertainment. From Tetsujin-28* (Gigantor in the USA) to the Led Mirage of Five Star Stories and beyond, some in the shapes of beasts or more abstract designs, I find them fun, fascinating, and definitely game inspiring.
The visuals, stories, and tropes of Mecha Anime/Manga - and Anime/Manga entertainment overall - always give me ideas for RPGs. The key thing about them, and the main thing casual observers seem to gloss over, is that the best and most interesting Mecha series defy or define their genre just as any other great work of fiction does.
Sure there are Mecha Anime and general Anime tropes but Gundam put them there, Evangelion twisted them, and Gurren Lagann redefined many aspects of how you tell a Mecha-oriented story. There are elements of Japanese pop culture entertainment we simply do not see here in the US or at least not in quite the same ways or at the same scales. The heart-warming fantasy of a Miyazaki film, the slice of life comedy of Azumanga Daioh, and the LGBTQ romantic action adventure of Revolutionary Girl Utena and not typical in Western entertainment, let alone Western RPGs.
This month, I want to embrace that range of diverse approaches, explore new RPG campaigns ideas, and take a look at rule systems that might facilitate giving your game an Anime/Manga feel. And most of this will come with Giant Robots of course!
This March you can expect to see:
Doesn't this sound wild? It sounds wild, right? Am I crazy? Is this even a good idea?
We'll have to wait and see...
AD
Barking Alien
Oh yes, I almost forgot...do you know what else is going on this month? Why it's the... 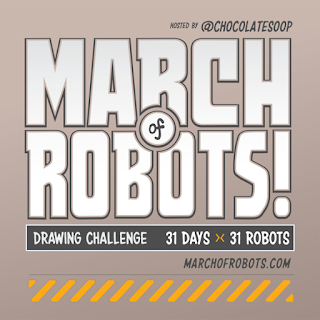 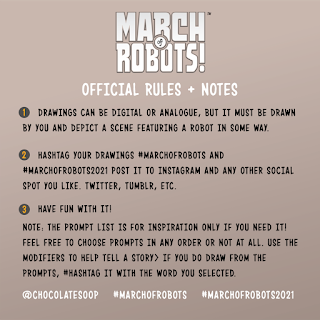 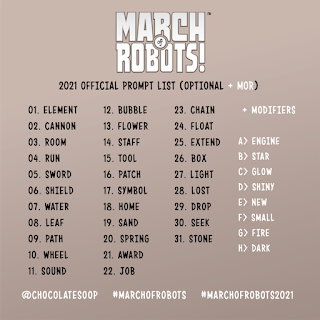 While I am not participating in this myself, I am totally going to be watching for cool robot art.
P.S.: *Gigantor / Tetsujin-28, as well as Giant Robo, are not piloted! Both of these early Japanese Mecha are controlled by young boys with communicator watches. Neat, huh? Hmmm. May have to provide that as a game option...
Posted by Adam Dickstein at 11:00 PM