In 2009, Game Designer Jim Clunie created a game for a 24 Hour RPG Challenge called Extended Mission. I originally found the game through the website 1KM1KT but as of now neither that site nor Extended Mission seem to exist. I will update this if they become available one more.
A rules-lite, resource management game, the focus was on playing satellites trying to get information about an abandoned Earth for the Humans living on Mars before their batteries ran out and/or they burned up in Earth's atmosphere. I was intrigued and inspired by the system and concept and began to tweak the rules to work with an idea I'd have for years; a game in which players would play Artificially Intelligent robots.
The result was something I initially called Extended Mission Expanded. I ran it for several sessions and those sessions were pretty damn great. I forget why it ended. Scheduling most likely, the ultimate enemy of good games.
From there I made some changed and pushed the game even further, thinking that if it could handle robots of the Star Wars Droid and WALL*E variety, maybe it could handle Giant Robots. Maybe, just maybe, I had a potential Anime/Manga Mecha game on my hands that could solve what I felt/feel is the key issue with the Mecha games that have come out so far...
They aren't, generally speaking, very Anime like. 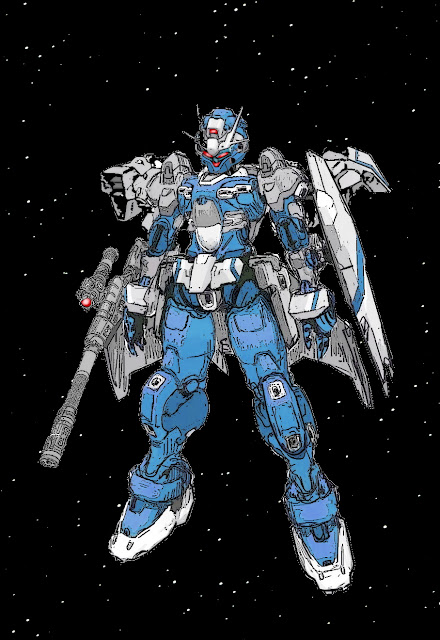 Before I get into that though, let me finish with the origins of my new RPG. Where was I? Ah yes...
Over the years that followed I tinkered with the game further and further, eventually transforming it from Extended Mission Expanded to Extended Mecha and finally its current incarnation - Mecha System Variant or MSV*.
Now here's where I give my unpopular opinion:
While there have absolutely been some awesome Mecha RPGs over the years, especially Mike Pondsmith's seminal game Mekton, most American Giant Robot games focus too heavily on tactical, wargame oriented combat. Pages and pages are dedicated to range, armor, damage, and the specific mechanics of missiles vs lasers, size and weight, and other such details that don't really matter.
That's right, you heard me, these things don't matter.
Very few Anime or Manga make a distinction between different weaponry beyond what that do. Is the opponent in range? Don't pull out a hex map and measure the distance - they don't do that in the medium. Are you and the target on screen at the same time? Was the enemy approaching before a jump cut to the hero? In either case, they're in range because that allows for action. You shouldn't slow down a Mecha Anime game with crunch and I feel that's exactly what most Mecha games do. 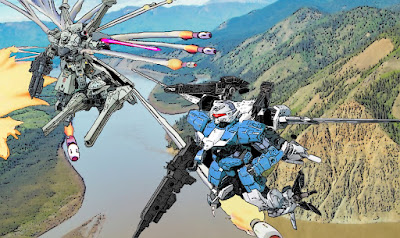 There are no hit points in Anime. Mecha rarely loose armor points, though sometimes their armor gets blown off.  Animation and Comics are visual and visceral and they focus on what happens, not on abstractions. Gundam robots don't take 3 points of damage, they lose targeting or visual sensors. When the EVA-01's arm is cut off the important thing for the audience to know is that the pilot, Shinji, is afraid and in terrible pain, not that it adjusts his hit modifiers.
To this end I set out to produce a Mecha game with no hit points and armor that reduces the level of negative events. I wanted rules that added drama and built to climaxes. It was important that the action move the story and vice versa, avoiding action for actions sake. This doesn't mean action isn't a major element of the game; far from it.  Mecha Anime and Manga are solidly a subgenre of Action Adventure. It's just that the goal in making this game was to create sessions where you can see and feel what is going on in the game and not spend too much time calculating numbers. Decisions you make are character, story, and scene driven and less tactical in nature. 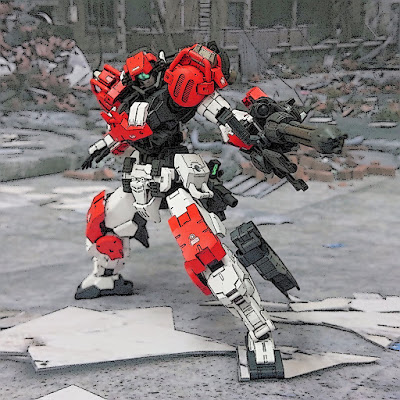 30 Minute Mission Alto Custom
by ICHI [いち]
At least that's the plan.
Here goes nothing...
AD
Barking Alien
*The name MSV actually comes from a series of books put out in Japan called 'Mobile Suit Variations' which detail designs and variations on those designs for robots featured in the Universal Century and One Year War timelines of the franchise.
Many of the designs never appear in any Gundam series, having been created purely for merchandising (models kits mostly) or for a planned series that was cancelled. Nonetheless, as the books were put out by Bandai/Sunrise - the company that owns Gundam - and designed by the writers and artists of the series, all the Mobile Suits in these books are considered canon.
I used to collect these whenever I found them and loved pouring over the various designs again and again. When I started thinking up names for my own Mecha game, MSV was the first thing that popped into my head and it kept coming back. Defining it as Mecha System Variant, an alternative to traditional Mecha RPGs, sealed the deal.
Posted by Adam Dickstein at 1:10 AM