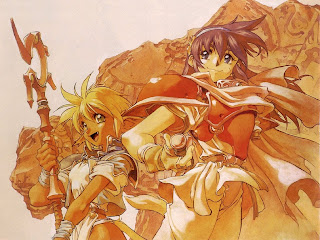 I'm going to skip the usual attempt at a humorous introduction and get write down to business. For an overview of what lead me to this path of madness feel free to read my old posts on my induction into the hobby and why my approach to D&D is...non-standard.

The basic things to consider when reading about my approach to Dungeons and Dragons are...

I was old school when it was new

I started playing in 1977 at the age of 8. I'm sure we ran games very much similar to how most old school games are being run right now for the first few years. When I was 11 I got to play with a friend and his friend whom I didn't know and who were a year or so old than me. They were back stabbing, power gaming, rules lawyers with a killer GM. After that one session I decided to go a different way...

My D&D games are as much influenced by Japanese Anime as they are Irish Folklore. L. Frank Baum is cooler than Howard (who I don't particularly like actually). Video and Computer games are not a sign of the End of Days. Relax. Get over yourselves. Read a comic book. Michael Moorcock rocks but so does Marv Wolfman.

I'm not a fan of the system

I don't really like any game anymore if you use more than two types of dice (one preferred), need to look at charts to do stuff, fight one way and use skills another and have meaningless/arbitrary hit points. PCs in D&D act the same at 100 points as they do at 5. Dude, you just lost 95 points. Aren't you at least winded? I also don't like class and level systems but I'll get to that later.

OK, so when I sit down to run D&D I have to consider all of the above and than look long and hard at the game. How am I going to stay true to me and still run this bloody thing?

First, I start with my homebrew D&D variant system which is basically an unholy mish-mash of AD&D 1E, D&D 3E and lots of houserules. A lot has been simplified. A lot has been dumped. Weapon speeds, encumbrance, the way distance is measured - in the trash. I don't use miniatures so I don't need half the stuff they put in these things. If my combatants fly, teleport, turn invisible, run very fast, etc., minis just slow me down. Plus, to find a 'mini' of a Dragon from my campaign in scale to a 25mm figure would probably cost my $200 dollars or more. Frickin' miniature companies and their puny dragons...

I have tacked on something I call the Talent System. Talents are abilities that are sort of a cross between skills, feats, class abilities and low grade superpowers (not really but they can be). All PCs start with one Racial Talent, two Class Talents and three Personal Talents. Talents are rated Major (+5), Medium (+3) and Minor (+1). I adjudicate them pretty loosely. Each Race (Elf, Dwarf, Wilder...er...Halfling) has a particular Racial Talent they come with while Humans get to choose one of three. Each 'Sub-Race' has a different one (i.e. High Elf has a different one from Wood Elf, etc.).

Cross breeds are either so common they have their own (Half Elves on my world are numerous and have their own nation) or they take the Talents of each parent species at a decreased bonus (usually +3/+2).

Made Classes Matter
I've altered the classes a bit and added some new ones so your class actually feels special. My Mages (Magic User, Wizards, whatever) don't function exactly like my Clerics. Clerics and Druids are similar though not identical. Sorcerers are totally different from anything I've seen in mainstream D&D though I'm less familiar with 4E and the Essentials info.

Most of these changes do make my classes and characters seem more powerful and over the top but its relative. The enemies can use the same class abilities and monsters have powers PCs don't have.

Made it Flexible
So while classes each have a more unique flavor, that aren't stuck to one ability at this level and another at that level. I have a list of Talents for each class and you can choose whichever one you want at whatever level. In one edition of my game, you noted what level you took a particular ability at so the Ranger who took Sworn Enemy (the +1 per level to a chosen type of opponent) at 3rd is going to be better at it than the Ranger who took it at 5th level when they both reach 11th. The first guy has been doing it longer.

Give Your Character a Story
It doesn't have to be deep and really shouldn't be a 10 page epic but a little background on your character will help in deciding your Personal Talents and why you do what you do. Unlike Race and Class talents, Personal Talents can be anything you dream up. You can even take another classes Class Talent but only as a Medium or Minor, never a Major. Other a Mage is going to cast Arcane Spells like a Mage. Your Dwarven Cleric wants to cast Arcane Spells because he's a cleric of the God of Secrets Under Mountains? OK, take it as a Minor Personal Talent.

The end results of this system create character far more like those I actually see in fantasy fiction, comics and animation. Gray Mouser could be a Rogue/Thief with the Curious or Shrewd Racial Talent and a Minor Personal Talent in Spellcasting or Sorcery. Ihrie of the anime Ruin Explorers is a Fighter with a Minor Transformation Personal Talent (though its in some ways a drawback which I may give the player bonus XP for playing up), a Medium Spellcasting Talent and a Major Talent in Ruin Knowledge (knowing stuff about various ruins and dungeons).

Basics
To hit - essentially like 3.0. Combat Class attack at Level +1. Non-Combat at Level -1. Everyone else at Level.

Initiative is highest Dex goes first. If two or more opponents have the same Dex roll a D6, go in order of who rolled highest going first.

Spells are cast just like classic D&D. Fire and Forget. But I have a reason and weird things you can do with Spellcasting as a result. Remember Spellcasting is a rated Talent. You can screw with your spells making the magic seem magical and the Wizards of some actual use at low level.