Why Don't We Get Things Started - Part 2

"Here to help me explain this part of the rules, which honestly aren't exactly rules at all, is my old pal and gaming buddy, the one and only, fantastic and furry Fozzie Bear!" 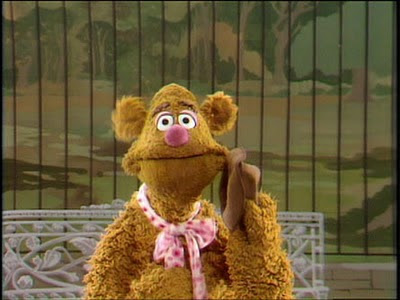 "Wow. Wokka Wokka! Yes! Yes I am here and I thank you for that introduction Adam. How can I help? Oh! Yes...the cue cards. Ok...When playing the Muppets RPG, time is not explained in rounds, turns and such but instead in scenes, sketches and skits. Ahhh! This is interesting!"

"Oh yes sir. Sorry. OK, Scenes are basically any time between sketches or skits. They often frame sketches and skits, coming before or after them. They are the most likely times for Muppet character development and building any overall plot the session may have."

Sketches are sequences in which the Director or in some cases a Player Character (say, if you're playing a certain amphibian MC) declares a particular scenario is going into effect.

These are largely Staged scenarios and should last no longer than 30 minutes to 45 minutes real time (or more. If you have a lot of players it may be more reasonable to say an hour. YMMV.). There should be a goal to a sketch or at the very least a theme. If a sketch drags on too long, the Director is encouraged to make the situation within the sketch spin wildly out of control. After a few moments of chaos, ask the group to come to an agreement on how to end the sketch.

The only real reason to make these distinctions is to make it easier to explain how to run a Muppets RPG game and how long some of the effects in the game are designed to last.

"Fozzie, would you care to give us an example?"

Ok, so a scene begins with the Player Characters all backstage. Um...Gonzo is reading a tabloid newspaper that says 'Alien Are Among Us'. The Director asks everyone what they think of the article. Gonzo and Rizzo are convinced by the article in the newspaper that aliens have been visiting for years and may be living among us in disguise. They start to worry that there are alien copies walking around the theatre. Kermit...he doesn't believe a word. He gets on the intercom and calls that first act up on stage."

"What do you think Kermit calls up as the opening act?"

"A song and dance number. Something funny. Grungy, slimy monsters sing 'Putting on The Ritz"."

"I love it. So now we would switch to a sketch. The sketch would be the musical number with monsters singing and dancing and possibly trying to eat each other."

"Ooh, oh. And one monster eats all the best singers so the only singer left is him."

"That's perfect Fozzie! If the monster..." 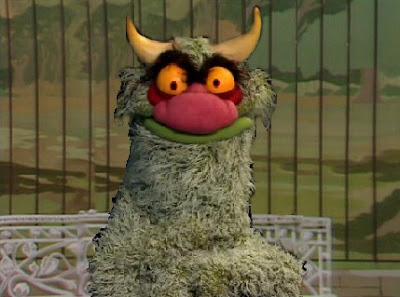 (Bows)A Skit is basically a really short sketch. It is really just a quick comedy routine of sorts that is (hopefully for the player who comes up with it) an easy way to get some extra applause. Often it's a sight gag or a simple running joke. Word plays and puns are particularly popular.

"Who are you calling a Mor-"

"Wait! I didn't say anything. I didn't use the lead in line."

"What? You didn't? I could've sworn...you mentioned a running gag and...well that's disappointing."

"Sorry Barkley. Stick around though. We're going to talk about Routines next."

Fozzie: (drinking champagne) You know, if you put enough sugar in this stuff, it tastes just like ginger ale.

Gah! In a hurry to get this out before I have to leave for the day but wanted to let you know we really are almost finished rules wise. Hopefully just one more post and we can get to the game running.

I'm writing up a blurb on this little project to send to the all-too-awesome blog 'Muppet Mindset' to hopefully be featured in an article there. That would be so cool! I'll love to know what Muppet fans who aren't gamers think of this idea.

Posted by Adam Dickstein at 8:59 AM