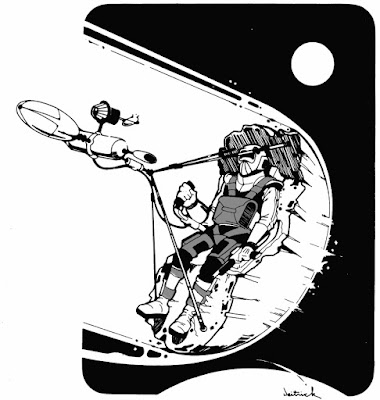 Happy New Year Everybody! Adam here to let you know that Barkley and I are back in action and raring to go!

Also, BARKING ALIEN first debuted on February 23rd, 2009 so this coming February will mark 10 years that I've been doing this blog. TEN FREAKIN' YEARS! Woohoo! We should throw a party or something.

It's been a very interesting and enlightening holiday season, giving me time to look at my favorite hobby from a fresh perspective. In truth it isn't so much that I came up with some startling epiphany or grand realization. More so that I could see more clearly what had been staring me in the face for a long time and yet I kept second guessing it and myself.

For some time now (many years actually) I haven't felt like I've been gaming to my full potential.

When I was in High School, College, even for many years after, I was considered one of the best Gamemasters in my circles. I discovered, thanks to a meeting with an old acquaintance some time ago, that I was even considered among the best by those who knew me and/or the players in my games even if they themselves weren't actually in any of the games I ran.

That last bit, it moved me. I'm being serious. As a guy who has suffered from anxiety and low self-esteem issues for most of his life it was like Godzilla being struck by lightning, charging me up with the knowledge that I really was good at something. Not just good, Great!

Alas, I feel a bit like my powers have faded over the past ten years. I know this isn't the first time I've said that here but I think I found part of the reason.

My oldest, most engaging group disbanded because several of the personal relationships in it broke up, not the least of which was that between my [now] ex-wife and myself. Ever since then, instead of running and playing games 100% My Way and the way the old group liked it, I've been trying to figure out how to play the way the new people I met preferred. I've been trying to adapt to others' play styles so I could make new friends and find new games.

Now there is nothing inherently wrong with this approach. I am not going to lament doing this specific thing as I have made some great, close friends, ran some awesome games, and had a lot of fun along the way.

At the same time, I am soon to be fifty years old. 50. I...*faint* Sorry, what...where was I? Oh yes, that also means I have been gaming for 42 years. Wow. I think I have earned the right to do what I want to do and game the way that makes sense to me.

True, I may find it harder to find and keep players. By being more me and less flexible I am shrinking my potential audience. My default style is not the approach the average gamer is used to. I am not a fan of D&D or Pathfinder, the games with the most wide-spread appeal and easiest accessibility.

Still and all, if I can't make myself happy, why and I doing this, right?

It is my sincerest hope that much like my groups of old, my players of today and beyond will appreciate my games and become fans of my GMing because I will have become a fan of my GMing once more. If I am sincere and passionate about it, that will show and resonate.

Here's to a New Year and a return to doing things I love doing. I hope you do the same.