It's Cold Outside, There's No Kind of Atmosphere...

As has been noted many times before, both here and elsewhere, Horror and Humor RPGs share many of the same attributes and pitfalls.

In fact, one could easily submit that the two genres are alternate sides of the same coin. Dark Humor can sometimes disturb, while poorly executed Horror often has value in that it is ridiculously funny.

In point of fact, I myself prefer the two genres to be combined, giving us things like the Ghostbusters franchise and comic books like Hellboy and The Goon.

It was this train of thought and the announcement of a new made for TV movie special that led me to my latest hysterically terrifying idea.

You know what IP would go great with the ALIEN RPG rules by Free League Publishing?


Free League please for give me... 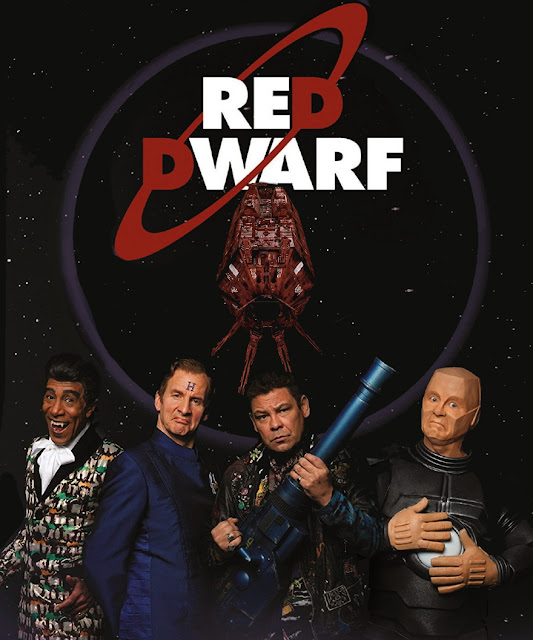 In Space, No One Can Here You Royally Smeg Up!

Hear me out...We start with two universes, that of Alien and Red Dwarf, where the baseline technology level is strikingly similar - space travel is possible though slow and cumbersome over great distances, there are androids, AI computers, hypersleep chambers / stasis booths, no known extraterrestrial lifeforms except what Humanity has wrought upon the universe, and a mind-numbing, possibly maddening knowledge that we may be the only reasonable sentient life in a hostile, godless, unfeeling void of endless blackness. 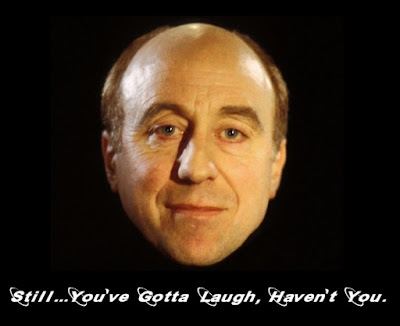 Enter a small group of interstellar blue collar workers - Space Truckers, Miners, Technicians - who brave the dangers of space travel for shares and maybe a little excitement in the form of a few nights at a casino on Titan.

Honestly one of the major catalysts for this idea was in the first episode of Red Dwarf - Seriously, Episode 1, Season 1 - where Dave Lister is informed that if he doesn't turn over the cat he smuggled aboard he will spend the next 18 months (the length of the Red Dwarf's current tour) in Suspended Animation and lose all his shares. What were Parker and Brett worried about on the Nostromo? That's right you gimboids, shares!

After Lister re-emerges from Stasis and learns of the fate of the Red Dwarf and its crew, he and the rest of the Smegheads on the 'Dwarf encounter a variety of space/time anomalies, GELFs (genetically engineered life forms), Sentient Holograms, and Rogue Synthetics (We prefer the term 'Artificial Gits' thank you very much). About the same type of horrors one might face in an ALIENS game, no? Just look here... 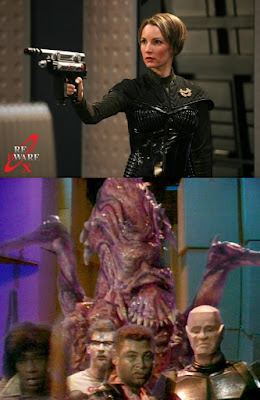 A Humanity hating Simulant
and
A genetically engineered Polymorph


The best part of all is the Stress Dice and Panic Mechanics from ALIEN are perfect for simulating the Red Dwarf Crew's propensity for freaking out and caving in to their, shall we say, less desirable character traits.

It is this subsystem of the ALIEN RPG more than any other that is the key to its effectiveness and success and the element that really brought home how well the game might work with the Red Dwarf setting.

For Technican Second Class Arnold J. Rimmer, who is a unholy amalgamation of self-importance, anal-retentiveness, cowardice, and bitterness over his continuing failure in all things 'life' (even after his death and resurrection as a Hologram), his Stress could result from his assuring the rest of the group that he is well versed in proper flight protocols and procedures only to receive a Panic result that causes him to leap up and leave the pilot seat when an insistent red light begins flashing, accompanied by an annoying 'Whooping' sound.

Kryten, the Red Dwarf's Series 4000 Mechanoid would then remind Mr. Rimmer, as politely as possible, that those lights and sounds were indicative of a collision alarm just as their shuttle, The Starbug, bounced uncomfortably off a mountain side and crashed, even more uncomfortably, on the surface of a barely livable planetoid.

Doing some digging into my copy of Red Dwarf, The Role Playing Game by Deep7 (released in 2003), there was a Fear Factor mechanic and chart there not unlike the Stress Dice and Panic Table found in ALIEN. 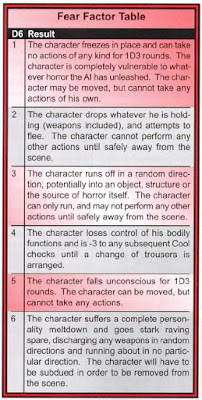 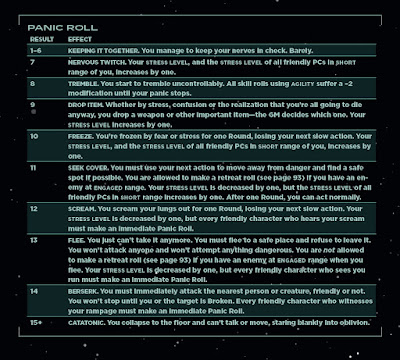 
If that weren't enough to convince you all of the shared DNA of these two games, consider that the Red Dwarf RPG also had a chart for Space Madness, while the ALIEN RPG has charts and rules for Mental Trauma and Neurological Disorders created by extreme cases of Panic.

And surely, Weyland-Yutani and the Jupiter Mining Corporation have absolutely nothing in common right? Riiiight.

Give it some thought Smegheads and ALIEN fans and tell me what you think. Am I on to something or am I as crazy as Welsh miner who finds the local pub closed on payday? Let me know!