Let Me Fly Far Away From Here


Outside the Starbug's cockpit view port, the greenish-brownish sphere of the planetoid it was heading towards spun closer and closer at very high speed.

As Chicken piloted the shuttle in a straight, tight, tummy turning trajectory, she noted that her people were not completely foreign to the concept of light. In fact, according to legends, her people could fly under their own power for short distances in 'ancient times'. She then wondered if the trip from Yellow Sun to the planetoid qualified as a short distance. Most of the others shook their heads or shrugged and she nearly panicked again until Wilder distracted her with pretzels.

Finally, the Starbug entered the atmosphere - thin, damp, and composed of whipping, high speed winds - and Chicken is instructed on how to initiate the landing procedure.

[I explained to Chicken's Player that she needs to slow down, preferably stop spinning, and land. I have her make a die roll and she gets 3 Successes. I ask her how many Successes she wants to put towards slowing, how many to stop rolling, and how many to landing. Chicken decides to place two to control the spin and one on landing.]

The shuttle straightens out and stops barrel rolling to fist pumps and cheers from the rest of the group, only for their congratulations to sour as the Starbug hits the soft, moist, sand-soil of the planetoid like an American Baseball player starting his slide into home plate waaay too soon. When the craft finally stops, a cloud of steam surrounds it and numerous screens flash indicating a relatively safe landing. Relative to death that is. 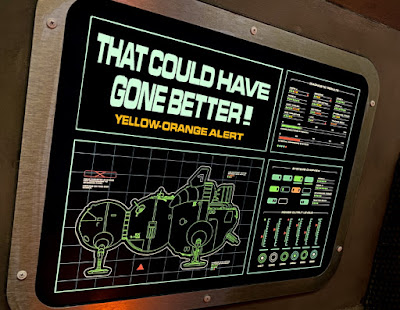 For when you know you're Smegged but not so Smegged you can't keep going.


Not far from the Starbug's crashsi...ahem...landing zone, the team spots the derelict they've been looking for. Scanning the wreckage from the shuttle's cockpit [at least the Sensors are still working. Mostly.] the gang is able to confirm it is definitely a Nova Class Explorer, though one that seems to have been significantly upgraded. ADAM notes that the Nova Class was brand new at the time the Yellow Sun experienced it's accident. The first of these vessels had launched only a month or so before Yellow Sun went looking for the Red Dwarf. The Nova 1 was a prototype and if successful others would be built down the line. 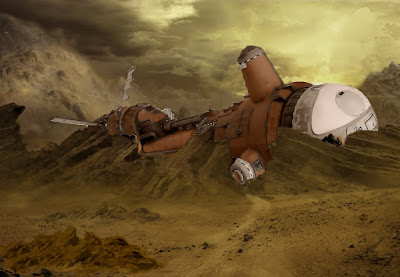 
After trudging through the strange landscape of the planetoid for twenty minutes or so, the group comes upon the ship, wedged between and on top of a series of jagged rocks. At a distance one of the group spots someone, or something, moving around inside the Explorer.

When they reach the derelict they notice an airlock on the side of the vessel. It is decided that ARTHUR, being charged with the Security of the Yellow Sun's 'personnel', should be the one to enter first. While trying to find a means to breach the airlock, Chicken suggests knocking. It's only polite.

A moment after knocking a voice with a calm and chipper British Columbia accent answers asking, "Yes? Who is it?" Wilder introduces himself and notes his position as a Rescue Specialist for the Space Corps. The voice is relieved as the vessel, now identified as the Nova 8, as well as its crew are in desperate need of assistance. 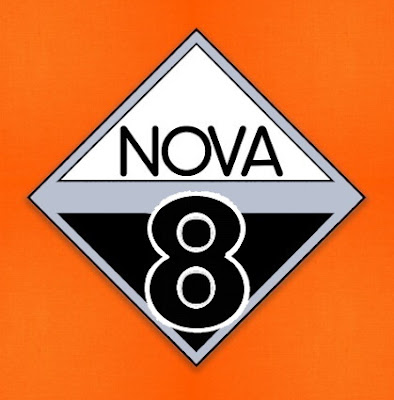 After cycling the outer, then inner airlocks, the Yellow Sun team encounters Basil, a Series 4000 Service Mechanoid who clearly sustained damaged in the Nova 8's crash. He greets them with a kowtowing, genuflect attitude typical of droids of his design. Wilder, Webb, and ARTHUR ask him about the ship's mission and crew and Basil is more than happy to introduce them around. As they move through the ship to the Research Labs and Science Stations, the Yellow Sun team sees piles of dust, debris, and hair in each chair Basil motions to as he introduces them as the Nova 8's crew. 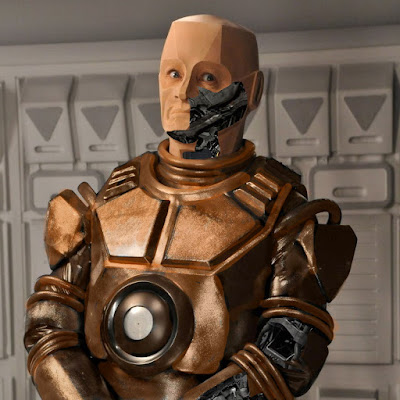 Basil, clearly oblivious to the fact that his crewmates are presently 'life-function challenged', continues to show the group about the Explorer, eventually taking them to the bridge. Here Wilder and Webb describe having some difficulty telling the various crewmembers apart (though they don't bring up that it's because it's hard to tell one mound of bone and hair fragments from another). Basil appears taken aback, pointing out the Captain's commanding presence and First Officer Takashi's austere and noble bearing. And how could you miss Navigator Chen's nature beauty? "I am told that among her organic crewmates she's considered 'quite the looker'."

Finally, Basil introduces the Yellow Sun team to Bennett, the Nova 8 AI, who speaks like an old, well-bred, Upper Class British gentleman. He seemed a tad forgetful and even out of sorts, possibly suffering from Cyber Senility. Be took a liking to Wilder and ARTHUR because they showed proper military protocol. He was very polite to Chicken whom he assumed was a young lady. He didn't trust Webb, whom he immediately saw as a layabout. 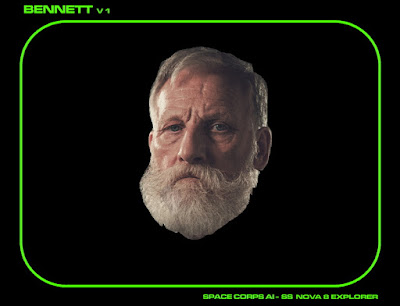 Convinced he'd seen all he needed to see, Wilder asked Bennett and Basil if he and his 'team' could have a look around. He explained that the Yellow Sun would render any aid it could and in exchange the Yellow Sun could use any fuel the Nova 8 had to spare. Basil said the engines of the Nova 8 were destroyed in the crash, which is what marooned the vessel and as such, the Yellow Sun was welcome to all the fuel they had since the Explorer certainly couldn't use it. Basil then implied he would start packing up the crew's things for transport to the Starbug and then the Yellow Sun.

"My guess is they travel rather light these days", remarked Webb.

Wilder, ARTHUR and Webb headed to engineering to get the Fuel Pods, noticing Chicken had already left the bridge area in search of the galley. She was promised pretzels after all. I mean, why else make this trip if there weren't any pretzels.

Indeed after poking around the Nova 8 at random, Chicken came across a small galley and mess hall. She opened every drawer, cabinet, and container she could but there were no pretzels to be found. She was about to go from frustrated to downright flabbergasted when a meak, sad sounding voice piped up from a silvery, metal box on the counter with two slits at the top of it.

Chicken perked up and smiled at the box. "I'm here!" 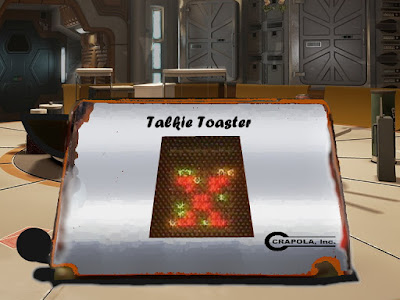 Next up, the thrilling conclusion of our first episode and plans beyond!

Stoke me a kipper. I'll be back for Breakfast!