Season I, Episode 1
'It All Ends Here'


The Yellow Sun and all aboard - OK fine, all four 'people' - sit in silence and darkness for several long seconds.

Suddenly the faint sound of engines and electronics whirl on as the ship's Pub is bathed in dim red light. Still fairly dark, ADAM appears on a screen with his face lit from beneath as with a flashlight. 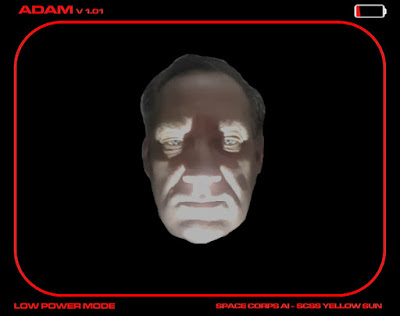 "May I Have Your Attention Please...", ADAM begins, speaking somewhat quietly, slowly and deliberately, "The Yellow Sun is rapidly running out of power. (Deep breath) We need to replace the primary fuels tanks...(deep breath)...as soon as possible. Lt. Wilder would you...Oh. (sign)..."

Hologram Wilder had disappeared moments ago along with all the other lights and sounds of the ship. Now he flickered back into existence, horizontal lines running through him, and color faded out almost to black and white.

"ADAM! What the hell just happened? What's wrong with me. I feel...woozy. Everything is a bit out of focus."

"Terribly sorry Lieutenant. As I was saying, we are...(deep breath)...extremely low on power."

"We need power don't we", Webb said as he shifted uncomfortably, "to stay alive and move the ship and so on. I'm not well versed in this sort of thing but that is correct isn't it?"

Wilder centered himself and took a deep breath. OK, he took the holographic representation of a deep breath. He looked directly at ADAM and spoke sharply, with clarity and authority, "ADAM, scan this region of space and determine if there is anything we can use for fuel that we can reach in our current condition. Once we restore power..."

"I am. I have to. Once we restore power we can determine our next move."

ADAM immediately went to work, fading out from the screen while the rest of the gang shared a new found, if brief, moment of respect for Lt. Wilder. A few seconds later ADAM returned with potentially good news.

The Yellow Sun's sensors detected a planetoid - described by ADAM as. "Significantly less than a planet, somewhat more than a moon" - upon which a derelict ship appears to have crashed landed. Based on the readings, the vessel may have intact fuel pods.

After a quick discussion, Wilder convinces the rest that the best course of action is to take a shuttlecraft down to the planetoid to try and retrieve the derelict vessel's fuel pods. This is not an easy task. Convincing the group I mean. While ARTHUR is programmed to follow orders and do his duty, it wasn't so simple talking Webb and Chicken into coming along. Webb couldn't see how his accompanying them would be helpful in the least and Chicken didn't even understand what was going on.

Eventually Wilder was able to lure Chicken with the promise of food, specifically pretzels which turn out to be a favorite of hers. When Webb asked what he could possibly do to aid in the retrieval of spaceship fuel tanks Wilder countered with, "You can carry things can't you?" Webb conceded that indeed he could.

The next phase of the plan was going down to the planetoid in a shuttle. Unfortunately, the team's most qualified pilot is Wilder who, being a Soft Light Hologram, can't touch anything, including the controls to a shuttle.

WIlder looks to ARTHUR 1001. "Are you able to pilot the shuttle ARTHUR?"

"I suppose so sir. I am programmed to act as a pilot in an emergency."

Chicken, quite inexplicably, takes interest in the conversation. "What's a shuttle? You keep saying shuttle?" The others explain it as a smaller ship capable of leaving the Yellow Sun and traveling through space to a planet. This is immediately followed by the need to explain what a ship, space, and a planet is. Chicken seems completely unaware of the true nature of her environment.

"I don't believe this", says Webb. "How can you not know you're on a starship hurdling through deep space?" 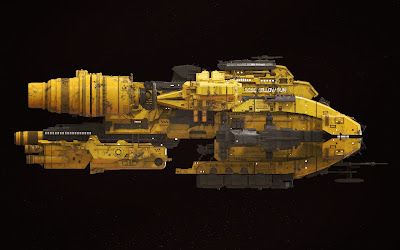 Chicken flies (ahem) into a sudden panic, "Hurdling through space?! Space?! I didn't know we were hurdling. Again, what's space?"

Wilder convinces Webb, with some difficulty, to pilot the shuttle with ARTHUR as co-pilot. Wilder would talk him through the specifics. When the group arrives in the Hangar Bay, Chicken points at the Starbug shuttlecraft and says, "The Green Thing! The shuttle you mentioned is the Green Thing? Why didn't you say so? I know how the Green Thing works. My dad taught me. He would take me down here when I was a kid and he'd show me how to use this thing." 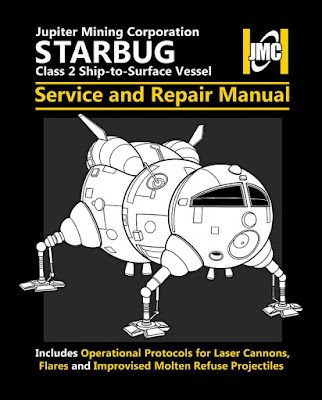 The rest of the group couldn't believe it. They looked back and forth to each other and then to Chicken. "So...you can fly it?" 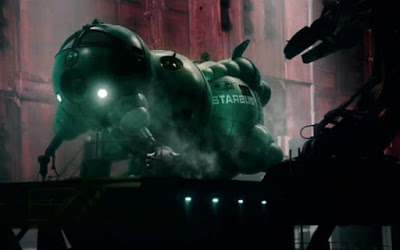 The group boarded the Starbug, a standard Class 2 Transport Shuttle, with Chicken as pilot, ARTHUR as co-pilot, Wilder at the Sensor and Science Station, and Webb in the seat behind the co-pilot. It is assumed that station, like Webb himself, does thing in particular as well.

Barring scraping the paint off the starboard side thruster on take off and spinning the Starbug into a perpetual barrel roll on approach to the planetoid, Chicken did a remarkably good job. Chicken chalked it up to her training with her father and her good genes. Almost being able to fly properly was in her blood!

Now, closer to their target, the Starbug's sensors were able to get a better reading on the planetoid and the crash landed ship. It appeared to be a Nova Class Explorer, though the computer could not get an exact ID on the craft for some reason.

"Alright Chicken, time to land the Starbug on that planetoid. Nice and easy now."

"It might help if you stopped spinning us around like a single sock in three pound laundry dryer", remarked Webb, holding his stomach and searching for the vomit bags.

"Ahhh! Yes I do. Just one more question."

"How exactly do I do that?" 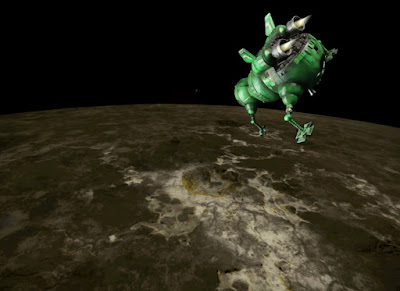