Spin My Nipple Nuts and Send Me to Alaska


[You can catch up on the full first session recap with these posts:

Fun, Fun, Fun, In The Sun. Sun. Sun.
Everyone is Dead Mitchell
Shipwrecked and Comatose
Let Me Fly Far Away From Here

or by clicking the tag 'Yellow Sun'.

Chicken had made it to the galley of the Nova 8 and after a desperate search for pretzels, she came upon a talking metal box that had clearly seen better days. In a voice small, exhausted, yet strangely hopeful, the box asked the age old question that had plagued Humanity for untold millennia.

"What? What's toast? It's grilled bread. The bread becomes warm and crunchy...and..."

"BREAD! I love bread!", says Chicken excitedly, "And you can make it warm? And yet crunchy like a pretzel? WOW! I think we are going to be great friends. I'm Chicken!"

*Sobbing and giggling with happiness* "I'm Talkie, the Talking Toaster. Bless you Miss. Bless you."

Meanwhile, the rest of the group were in the forward section of the Engine Room; the front of the rear one might say. They found the Fuel Pods nearly full and intact, though the Drive Section itself was a total wreck. Large, sharp rock formations had gone right through it. Wilder instructed ARTHUR and Webb on how to safely remove the Pods and get them ready for transport. 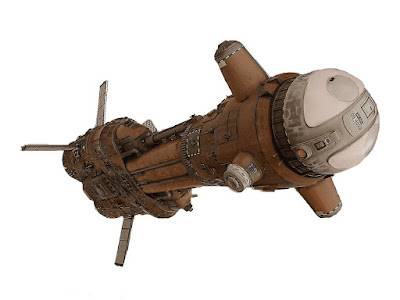 The Space Corps Deep Space Explorer Nova 8 in its heyday.


Basil walked over with some suitcases and told the team he was prepping everything for evacuation of his crew. He still had some luggage to pack however. Wilder explained that they'd load everything onto the Starbug and transport it up to the Yellow Sun when the evac was complete. He suggested Basil start moving the luggage to the Starbug now while the Fuel Pods were being removed. Basil thought that an excellent idea and left to get started.

The gang (minus Chicken) begins to discuss their situation. Something is clearly wrong with Basil and there are a number of details left out of the information they received on the Nova 8 they'd like to have filled. Unfortunately, the priority has to be obtaining the fuel, so they start lugging the Fuel Pods to the airlock when suddenly Bennett appears on a wall screen near them. Wilder salutes, "Yes Bennett? Is there something we can help you with?"

"Hmm? What? Why did I...Oh Silicon Heavens yes! Basil isn't here correct?" The group confirms he is not. "Good. You must be most careful around him. He's a few triangle sandwiches short of Afternoon Tea if you catch my meaning. He can be quite dangerous."

Wilder and Webb exchange glances. "The crew of the Nova 8...did he kill them?"

"What? No, no. He wouldn't. He couldn't. But...if you press too hard on the fact that they are in fact very much dead he'll go into an absolute frenzy. You are not his crew and he might harm all of you." 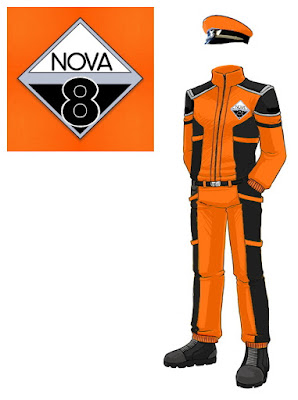 
"Hello? What are you all talking about?"

The gang looks up to see Basil putting down too large suitcases and titling his head in query.

Webb and Wilder whisper, "Nothing about the Nova 8 crew's...condition. Got it?"

"Absolutely. They are as fit as I feel", remarks Webb with an eye roll.

"Certainly sirs. Just one more set of luggage and then, if you would be so kind, you can help me escort the crew to your shuttle."

"Sure", says Webb, then whispers from the corner of his mouth, "does anyone have a vacuum?"

Just then Chicken comes up from behind Basil, a piece of toast in one hand and bread crumbs all over her face and hands. "Hey guys, you're not going to believe what I found! It's a toaster. It makes toast! Which is really warm, crunchy bread. Also, I think the entire crew of this ship is dead."

Basil begins to twitch and tremble. "What...wh-wh-wh-what did you say Mum?" 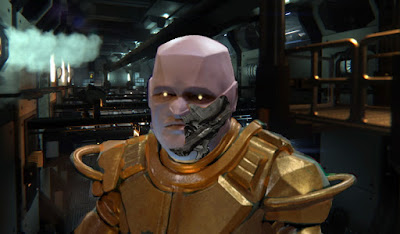 Basil's eyes and the circle on his lower abdomen began to glow a bright yellow-white, with the latter blinking on and off. He took a swing at Wilder but it passed right through the Lieutenant's Soft Light form. Basil jabbed his other fist at Webb but missed as Webb ducked and ARTHUR moved to intercept.

Chicken began screaming and waving her arms around and just as she planned it distracted Basil enough for ARTHUR to pin his arms in a bear hug. OK, a Robot Bear hug. As Basil flailed about shouting things like, "How dare you!" and "No! Na-Na-No! My sweet crew!", Webb got in front of the maniacal droid and saw the blinking disk on him blink faster and faster. Gulping down his instinct to run, Webb pressed hard on the disk which appeared to temporarily knock Basil 'unconscious'.

After a minute or so Webb pressed the button once more, gently this time. Basil woke seconds later, seemingly alright, until another whispered comment about the crew almost set him off again. This time Webb pressed the disk right away and did not touch it again.

The team moved back up the vessel's length until they had reached the bridge. Calling up Bennett, he appeared looking even more tired, barely lucid, and pale. When the group asked what had actually happened here, how did the ship crash, when did it happen, and was there anything that could be done about Basil?

At first Bennett seemed not to hear them, asking "Who's that? Who's there? Speak up!" When the gang identified themselves yet again Bennett remembered but said that without the fuel and with the damange and the years he was not going to make it. He did reveal some very useful information however. The ship crashed in the 24th Century, some 200+ years after the Yellow Sun's accident. The Nova 8's Computer Archives would contain information and technological advancements considerably ahead of the Yellow Sun's databanks.

In addition, an operators and maintenance manual in storage on the bridge and in the data records might be able to help with repairing Basil if the group chose to do so.

With that, Bennett said his farewells and faded from the screen. The gang worked fast to download as much information as possible before the entire system went offline for good. Luckily they managed to find the physical Mechanoid Manual though there was some debate over whether it was too little too late.

Webb reactivated Basil and told him that the Nova 8 was so busy with their scientific work, it might be best if they stayed on the planetoid to complete their research. If that was the case, it only made sense for him to stay as well as they would need him to take care of things. The cooking, cleaning, laundry, etc.

Basil seemed a bit delirious but remained calm as Webb spoke. He eventually smiled and told Webb what a splendid idea that was. Webb then convinced him he might want to enter a Rest and Recharge Mode, go offline for a bit, as he had a lot of work ahead of him. Basil agreed and waved goodbye to Webb and the others as he appeared to enter what appeared to be a robot coma.

As Webb started to leave, ARTHUR asked what was going on. He became rather cross when he gleaned the intention was to leave Basil behind. Wilder and Webb both thought it best but ARTHUR disagreed.

"Is that it then? Robot a little damaged so we leave it to rot do we? Don't worry we'll get a new one? Find a better model? No sense fixing this one is that it? Typical Humans."

With that ARTHUR placed the manual and Basil on a hand-truck and wheeled him through the wind and grit back to the Starbug. He intended to make repairing Basil a personal pet project of his.

When the gang finally returned to the Yellow Sun they were met a the doors to the Hangar Bay but a half dozen Skutters who took the luggage, as the suitcases had indeed been loaded onto the Starbug and, well what the hey, right? ARTHUR took Basil to the Robot Repair Bay and the others moved the Fuel Pods down to engineering.

Sometime later the gang regroups in the Yellow Sun's Drive room [wherein the greatest, most unexpected thing happens that sets the theme for the campaign going forward]. Webb says that with full power restored the ship can now change course and take the gang back to Earth, assuming there is an Earth to go back to.

Wilder on the other hand has a different idea. He asks ADAM if he detected the Red Dwarf at any point in the past three million years while Webb was in Stasis. ADAM says no. No sign of the Red Dwarf was every found.

"Then our mission isn't over. The Yellow Sun was dispatched to locate the missing JMC mining vessel Red Dwarf and we haven't yet. We will. Once we do, then we head home." 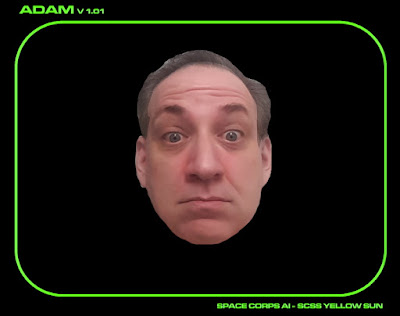 [And so ends our first session. It was a total BLAST and the gang had a lot of fun, as did I. I will try to do a single post, weekly entry with each additional episode as we go forward.

There were a lot of character bits, jokes, Easter Eggs, and such that I left out but I think I conveyed the keys elements and a sense of the PCs, setting, and plot. I love that the PCs have ongoing personal goals, such as Wilder's search for Red Dwarf and hope that the advanced information from the Nova 8, 200-225 years ahead of the Yellow Sun's data, can help with the mission. I appreciated both Webb trying to give Basil a noble 'death' but also ARTHUR's feeling that it was an affront to Robot-kind and wanting to try to repair the poor mechanoid. Plus, Chicken took the Talking Toaster from the Nova 8 and brought it on board the Yellow Sun because it makes crunchy bread and they are friends.

I hope you all enjoyed the tale half as much as I enjoyed telling it.

Please tune in again as we drink fresh mango juice while goldfish bowls nibble at our toes!]