Alright gang, here's where I lose you...
All this time I have been talking about my Medieval Fantasy game, I have yet to address what it would be about. Basically, what is the theme of this and why is it different from the majority of the other games out there.
Well...
In addition to the obvious Anime/Manga elements of kinetic action, complicated romances, wacky humor, and the other tropes previously discussed, the medium is really good at taking a well worked concept and adding a distinctive twist to give it new flavor.
On the surface, Neon Genesis Evangelion is just a Mecha/Alien Invasion series but it's not really that at all. My Hero Academia is basically just The X-Men or Avengers Academy but then it goes in its own direction with both its characters and world building.
What I want is something similar for Dungeons and Dragons-style Fantasy. What appears to simply be another game of Mazes and Monstrosities turns into a world with a lot more options for the kind of games you can play and stories you can tell.
One of the things that's always bugged me about the typical Medieval Fantasy RPG experience is the sameness of it when I feel the genre has more to offer.
My current obsession - the Manga series 'Delicious in Dungeon' - prompted me to give more thought to what could be done with a Fantasy game other than 'Killing monsters and taking their stuff' and 'Saving the world from the evil /mad villain'.
Imagine a world where 'Dungeon Delving' and the 'Ecology of a Monster Ecosystem' are part of the every day life of a select few of very brave and dedicated professionals and/or those who want to be that someday. What cultural, social, economic, and political dynamics would develop over this type of addition to Fantasy Medieval societies?
Some possibilities that came to me include: 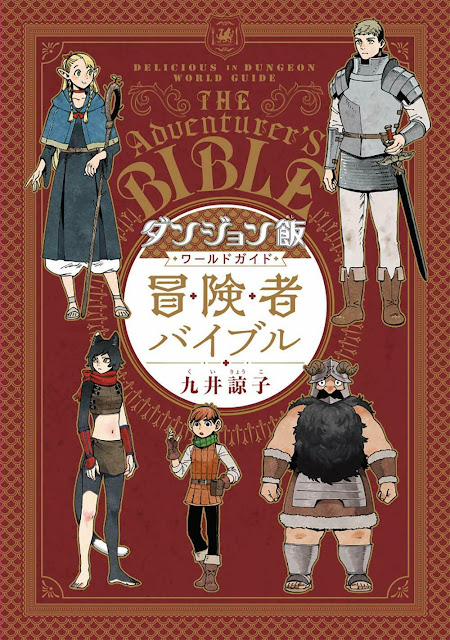 The Delicious in Dungeon World Guide
The Adventurer's Bible
A Guide to the setting and character of the Manga
Delicious in Dungeon
PCs are Professors or Students at a School for Adventurers and Dungeon Explorers. It's like Harry Potter in Medieval Times or My Hero Academia meets D&D. I have actually run a one shot using this idea and it went over pretty well. Lessons cover telling various Monster or Flora apart, what attacks and defenses are most effective against which Monster, and how to disarm traps. Exams could have groups of Students compete to which one can reach a Mock Treasure first or defeat a Monster quickest with the least amount of injury. Then they need back out of the Dungeon an allotted amount of time.

PCs set up and run a Supply Shop/Inn/Tavern inside the Dungeon. Instead of going back to town to resupply or rest up you just need to make it back to the third level of the Dungeon to get to the Player run business. This concept is actually seen in Delicious in Dungeon and it has all sorts of potential. Part of the campaign could see the PCs going into town or a near by waypoint to buy, sell, and trade what they need for their shop. There could be a rival shop run by the local Dungeon inhabitants! Maybe you need to go into the Dungeon to retrieve someone who owes big on their bar tab or had a big supply order come in.

PCs are or work for a well known Magical Component supplier - perhaps with a chain of stores - and go into the Dungeons and Fantastic Forests purely to gain such materials. It isn't their job to slay Monsters or Save the World but those who do depend on them.

A variant of this seen in Delicious in Dungeon (and further expanded with ideas of my own) is that the Dungeon might have the perfect conditions for growing certain crucial healing herbs and potion ingredients. Maybe it was even set up by the local Magic School or Wizard's Guild for that very purpose! Your party is really a group of Field Researchers seeing how the great Dungeon Experiment is doing. (In fact, if this was my campaign the Anime/Manga-themed title would be 'Dungeon Experiment' and then the name of the region or the project's creator or something).

Ooh, what if a friend of the PCs, a classmate or fellow researcher or what-have-you, went into the Dungeon for a 'Jane Goodall' type study of a Monster type and didn't report back when the study was supposed to conclude. Was she eaten by a Monster? Killed by the very Monsters she went to study? What if she spent to much time in there and was changed by a curse or foul magic? What if she just made friends and 'went native'?
And this is only if the game revolves around Dungeons! Seriously, these ideas are already twenty times more interesting to me than any of the Dungeon adventures I've ever been on.
I have so many more ideas and would like to hear yours! No Murder Hoboing (unless you have a wildly different take on it) and no Fight Evil/Save the World stuff. What ELSE can be done with the genre? It can be angsty, humorous, espionage oriented, or anything else but it must be something we don't usually see applied to Medieval Fantasy.
Now to work out a game system. I definitely have some thoughts...
AD
Barking Alien
PS: The way I know I'm really on to something here is that after three days of searching for images to go with this post I found nothing, NOT A THING, that came close to displaying the kind of 'Slice of Life' Fantasy Adventure I'm thinking about. I must therefore assume I am revolutionizing the very concept of the Fantasy RPG.
Even though my ideas are largely borrowed from or inspired by Fantasy Anime and Manga.
*Shrug*
Posted by Adam Dickstein at 12:08 AM