The Dungeon Meal Guide for Adventurers

While working on the rules for what I hope will be an upcoming Anime/Manga themed Medieval Fantasy RPG campaign, I had a mini-epiphany; one that is making me question how best to proceed.
The more I work on The Dungeon Experiment, the more I realize how much it is being influenced by a single Manga series: Dungeon Meshi, known in the USA as 'Delicious in Dungeon'. 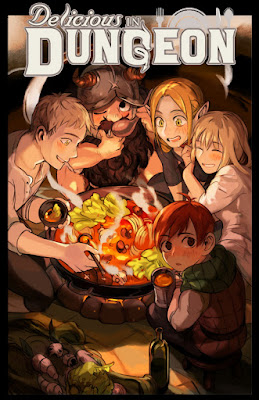 Sure, a lot of ideas go into a project of this nature and some are conscious additions while others seep in over time and through fandom osmosis. While I am not actively adding anything into The Dungeon Experiment from say, Record of The Lodoss War or Ruin Explorers, those are definitely two Japanese titles in the same genre that I really enjoyed in the past and to say they have no effect on my approach to this game would be short-sighted.
That said, Dungeon Meshi is really the template from which I am working. This begs the question - Considering who I am and how much I love IP/Franchise based gaming, does it make more sense to create The Dungeon Experiment or simply make a Delicious in Dungeon Tabletop RPG? 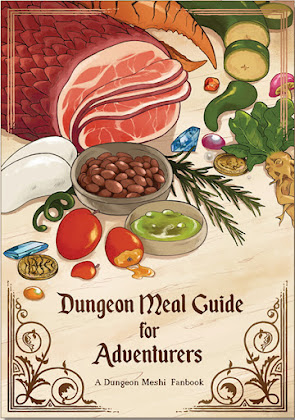 In the seven years that the Manga has been in print (first US edition produced by Yen Press was released in May of 2017), the series has generated excellent reviews and a sizeable and dedicated fan following.
Creator, writer, and artist Ryoko Kui, in addition to the main Manga, has produced a guide to the characters and setting (The Dungeon Meshi World Guide Adventurer's Bible),  Senshi's Diary - A Record of Life (a series of diary entries by the Dwarf Cook Senshi noting observations about his fellow party members and what they'd all eaten), several one-shots tangentially set in the same milieu (most notably the story, 'There Were Dragons in The West'), and three artbooks/sketchbooks entitled Daydream Hour that have additional notes on the world, its species and monsters, alternate and additional characters designs and costume variations, and more.
Finally, the book shown above, 'The Dungeon Meal Guide for Adventurers', is both an in-universe book the character Laios Touden carries around with him and an unofficial fan-made  actual book containing original fan art and recipes (giving both monster ingredients and real world ingredients that can be substituted to make the dishes in your own kitchen).
All this additional material [beyond the Manga chapters themselves] fleshes out the setting in a way that is perfect for world-building an RPG campaign. The additional art is an excellent way to visualize elements unique or specific to the game world (such as depictions of Dungeon Meshi's Orcs and Kobolds). 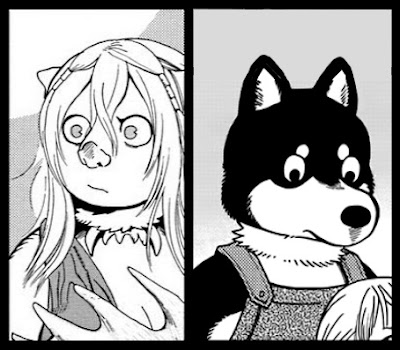 Left: Female Orc
Right: Male Kobold
I love the doggo Kobolds!
I have a lot of reasons to love this idea and to want to make an unofficial fan-made Delicious in Dragon RPG. But...
Should I? Shouldn't I stick with a more original, widely accessible game with inspiration from Dungeon Meshi AND all the other series I've been discussing. Part of me thinks this makes the most sense. I don't need to introduce those unfamiliar to the world of the Manga if I am using a world I am developing as I go. It's definitely more flexible, more expansive, or at least that's how potential players would see it (as people always feel strange entering an established setting that they don't know...for some reason).
Yet...I am the 'IP Guy'. I feel the pull; the challenge of making a game based on this series. The same reasons I love running DC Comics Superheroes, Ghostbusters, Red Dwarf, Star Trek, and Star Wars, are the reason I feel the desire, almost the need, to make a Delicious in Dungeon RPG.
I'm torn.
Curious to hear what others think.
I guarantee you more to come soon...
AD
Barking Alien
Posted by Adam Dickstein at 11:48 PM