Here's a big secret from my World of Aerth / Winghorn Guard campaign world unknown to most player and their PCs even to this day. Others have had to risk life and limb to find this bit of lore and here I am giving it to you all for free.
You're welcome.
Why Dragons Have Hoards... 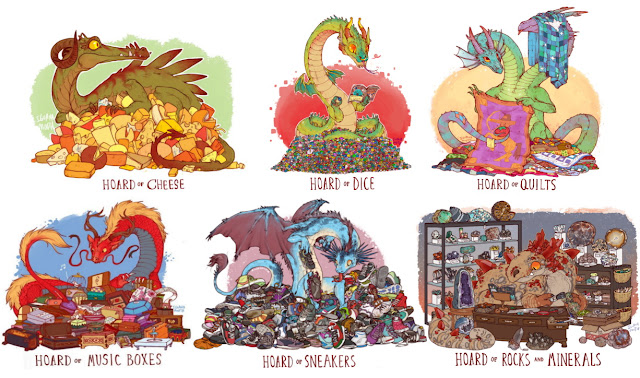 Uncommon Dragon Hoards
Art and Concept by Lauren 'Iguanamouth'
"Greetings and Salutations friends, as well as all seekers of knowledge Arcane and obscure who are not yet friends. Perhaps you are mere acquaintances. Perhaps you wandered in off the street. Hmm, now where was I? Oh yes, I am the one and only Ipperius Argenti-Hydrangea WitSpear, proprietor of Witspear's Wondrous Wizardry Emporium and consultant to none other than The Winghorn Guard on matters of myth, legend, folktale, and truth, for on Aerth these things are all one and the same.
Today I shall reveal the history of Dragons and why they are such avid collectors of...well...that depends on the Dragon. You see it all began at the beginning, as most things do. The first fact you must understand is that every people on Aerth have their own creation myth and all of them are so very, very wrong. Yes, sadly it's all nonsense I'm afraid.
The multiverse was created by The Great Alicorn, or Winged Unicorn if you prefer, in the Oldest of Times. Creating an infinite array of Universes is difficult work as you might expect, so The Great Alicorn created helpers to assist in the construction. These helpers were The Dragons.
Each Dragon used the vast knowledge, power, and skill it had been given to form the Stars, the Planets, and all the non-People bobs and bops that form the Cosmos. Red Dragons used their fiery breath to carve canyons, Silver Dragons combined Ice and their ability to Stop Time to form glaciers, the iridescent Pearl Dragon breathed life into the environment, and the Poison Gas of the Green Dragon prevented said life from growing out of control.
One assumes this all took a ridiculous amount of time but as the Winged Unicorn had not started Time ticking yet in the same way we know it now, it was completed right on schedule. It was quite exhausting however, tiring in a way that only making Universes can be. Before the Dragons went down to a long deserved slumber, The Great Alicorn held a celebration to thank his creations for their efforts. During the festivities, Tiamat - the multi-headed foreperson of the Chromatic Dragons - asked, "So what becomes of all of creation now as we go to sleep?"
"It will be run by my newest creation, Gods", said the Winged Unicorn, "Deities, beings of great power very different in form from yourselves. They will explore what you have made, run it for a time, and eventually make creations of their own to live in it I would imagine."
The Metallic Dragons all nodded. What a splendid idea. What a grand experiment!
The Chromatic Dragons were not so pleased with this news. "We did all the work and the enjoyment and rule of it goes to someone else? Not even to you but new beings who did nothing to help forge it? That seems unfair and more than a bit foolish." All eyes turned first to Tiamat as she finished uttering these words, then to The Great Alicorn to see his reaction.
He gave a warm smile and handed her a drink. "An interesting assessment. I shall think on it." And so he did...
The thoughts of Multiversal Creator Entities do not form quickly. The Dragons, even Tiamat, grew tired of waiting for the Winged Unicorn to change its mind and drifted off to slumber. They made their beds in the places they'd built that they favored. Caves were very popular, as were deep forest groves, and under the dunes of deserts. So tired were they that they slept for a thousand years and more.
Sort of. You see, Tiamat and the Chromatics didn't go to sleep right away*. They rallied and argued, planned and schemed, and made a foul pact with one another that when they woke up they'd take the worlds they'd made for themselves. They were owed! It was their handiwork after all!
When they did eventually wake they found the Universes were very different places. They were full of People. Yes indeed, the races of Humans, Dwarves, Wilders, and Elves - and even stranger sorts - had taken residence in the Dragons' domains. The people were using THEIR wood, rock, and metal! They were living in their forests, deserts, and snowy mountains! No! No this would not do.
Today...if you wonder why the Dragon hoards stolen gold be aware; to her it is HER gold. She made it. It's hers. The Green Dragon by the river has taken back her wood in the pile of ornate furniture she sits on. That artwork gathered by the Blue Dragon of the Eastern Sea was created with paints made from minerals and plants he helped construct!
Dragons aren't stealing and hoarding...they are taking back what's theirs."
AD
Barking Alien
*Incidentally, this is also why Dragons sleep so much and why their lairs sometimes seem to small for them to fit in. First, they are still tired from building the world. Second, when they went to bed in that cave it looked very different from how it is thousands of years later.
Posted by Adam Dickstein at 3:09 PM